Recent A Memory of Light News 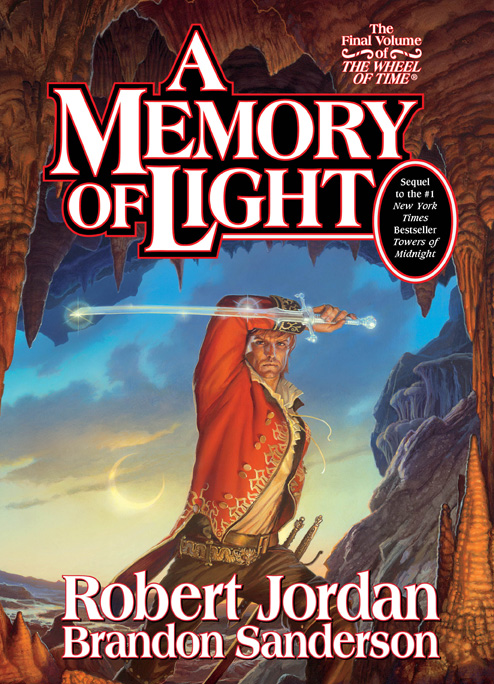 Over the last several months, there have been many exciting announcements about A Memory of Light, the highly anticipated final volume in The Wheel of Time series. In case you've missed our previous coverage, here's what we know so far.

Brandon Sanderson finished the first draft of the book on December 21st, 2011. It was immediately turned over to Team Jordan for review. Brandon anticipates needing at least a dozen drafts before the book is ready for publication.

We anticipate that Brandon and Harriet McDougal will both go on a signing tour for the hardcover release, however no cities have been announced yet.

Michael Whelan was announced as Mr. Sweet's replacement. More info about Mr. Whelan's cover can be found here. Tor.com has posted the full cover, as well as notes from Whelan on the process and some of his rough sketches.

Orbit Books, the UK publisher who publishes the WoT books, has also released their cover.

At this year's JordanCon, Harriet read to us a portion of the prologue of A Memory of Light. While no recordings were allowed, Tor and the Jordan estate have graciously allowed us to reprint the text of the preview. If Tor follows their usual pattern, there will be an eBook version of the complete prologue available for purchase sometime between now and the release date. Orbit has also released the jacket text for the book. We believe the same text will appear on the US editions as well. We have reprinted the text here for your convenience:

All humanity is in peril – and the outcome will be decided in Shayol Ghul itself. The Wheel is turning, and the Age is coming to its end. The Last Battle will determine the fate of the world.. For twenty years The Wheel of Time has enthralled more than forty million readers in over thirty-two languages. A MEMORY OF LIGHT brings this majestic fantasy creation to its richly satisfying conclusion.

A Memory of Light information and discussion

A Memory of Light discussion forum. (Beware, some threads have prologue spoilers!)

A Memory of Light info page

Listen to or read Chapter One of A Memory of Light

Our friends at TarValon.net are re-reading the series and giving away free audio books in preparation for the release.