“The world is broken. Many, many, years ago, men who were born with great power believed they could cage darkness itself. The arrogance....” Moiraine Sedai (Rosamund Pike) tells the story of the man who was named Dragon. She shares her resolve to find the boy or girl who has been reborn as the Dragon before the darkness does. The Dragon was a man who caused the Breaking of the World but is meant to save it as they are woven back out into the World. We see Moiraine set out on her journey with Lan (Daniel Henney) at her side.

Observed from above, five women wearing red ride on horseback after two men who are trying to escape on foot. As they race though the rocky and mountainous terrain, the men head towards a gap in the rocks as a means of escape. The Aes Sedai leading the charge raises her arm and brings down the rocks of the mountain to block the men’s path. She dismounts to approach, and the man begs for his friend’s life. Quickly, we learn that the women had been pursuing only one man, and that he was going mad. As they take the man, they tell him that his power was meant only for women and that any man touching it makes it “filthy”. Lan and Moiraine, observing from the cliff above debate whether this was the man they sought. Despite him being the right age, Moiraine believes that it is not the man she was searching for and turns her sights to the rumored four ta’veren in the Two Rivers.

The first glimpse of the Two Rivers is from the edge of a cliff. The women braid Egwene’s (Madeleine Madden) hair as Nynaeve (Zoe Robins) tells her what it means to be a woman and prepares to initiate her into the Women’s Circle. “To be a woman is to be always alone, and never alone.” Nynaeve shoves Egwene off the cliff and into the raging water below. At first Egwene fights the river being dragged down by the powerful current, but as she surrenders, she is carried safely to the riverbanks, presumably completing her initiation.

Moving through the mountains, Rand (Josha Stradowski) and his father Tam (Michael McElhatton) lead a cart loaded with supplies to town for the festival of Bel Tine. They reminisce about days past when Rand was just a child, and his mother was alive. They make mention of Rand as a young boy picking berries for Egwene.

The Two Rivers is a secluded part of the world near the Mountains of Mist. Small as it may be, it does have an Inn where the townspeople gather to drink and celebrate. It is approaching evening and the Inn is full. Rand meets up with his friend Perrin (Marcus Rutherford) and their degenerate gambling friend Mat (Barney Harris) briefly joins them as well. Mat is a gambler who frequently loses, Perrin is married, and Rand is pining over Egwene. There are rumors of a war in Ghealdan, most of which is dismissed as gossip. The town learns of Egwene’s success at her initiation as she enters her parents’ inn to a round of applause. As the evening wears on and the drinking continues the celebrating is briefly interrupted as a man in black enters from the rain.

Slowly he removes his hood, and it is revealed to be Lan Mandragonran. Moiraine enters behind Lan, and he introduces her without the honorific Aes Sedai, but her ring gives away her title. The quiet village does not seem accustomed to seeing Aes Sedai, and rumors and speculation swirl. What do they want? And when will they be gone? Everyone seems unwilling to get mixed up in Aes Sedai business. Perrin retreats to the forge with his wife Layla and Mat goes home to check on his sisters. As the rest of the town heads to bed Rand and Egwene finally get time alone.

Moiraine and Lan unwind from their travels in a warm bath. The One Power is used again as Moiraine obliges Lan and heats the bathwater. Night surrounds the village and with everyone scattered we see a hooded figure on a horse ride slowly into the village. The figure on horseback is not quite a man, with pale white skin, a large mouth, and no nose or eyes. He certainly has sinister intent.

The next day dawns bright, with a clear blue sky. A wagon peddler named Padan Fain (Johann Myers) arrives at the Two Rivers. He is clearly familiar with the village, and Mat Cauthon in particular. While the people of the Two Rivers prepare for Bel Tine, Lan and Moiraine began their work. Lan searches for signs that evil is approaching and Moiraine tries to learn what she can about the young people in the village. She questions Nynaeve and in doing so reveals that Nynaeve was not born in the Two Rivers, making her yet another candidate for the Dragon reborn. The former wisdom who raised Nynaeve tried to join the Aes Sedai, but apparently, she was turned away. Nynaeve explains that the former wisdom’s status as a “lowly” village woman led to her dismissal. Clearly, whatever happened, Nynaeve does not have a positive opinion of Aes Sedai. Rand and Egwene’s relationship comes to a head and she informs him of her decision to train to become a Wisdom, instead of choosing a life with him.

Night falls once again and the villagers begin to celebrate Bel Tine. They light candles to help guide the spirits of their loved ones back to them. While the village remembers and celebrates with song and dance Tam and Rand discuss reincarnation and the turning of the Wheel of Time.

“All we can do is the best we can with the life that is given to us.”

Musicians play a lively and intoxicating tune as the whole village dances on the village green. Egwene turns to dance with a friend and just as suddenly as the revelry has begun it is torn apart as her friend falls dead, an axe in his back. Suddenly, a massive beast, part man and part animal, emerges for all to see. Its guttural roar silences the last visages of celebration and alerts the villagers that it is not alone. Trollocs pour in from all sides killing indiscriminately as the villagers attempt to flee and the town burns. The ground is littered with bodies, and death seems immanent for anyone who crosses a trollocs path. Egwene and Nynaeve attempt together to help those they can. Mat rushes home to his family, only to find that his two young sisters are missing. Without pause he rushes back out into the night to ensure their safety.

Tam and Rand are attacked at their mountain home as a trolloc as large as two men bursts through the door. Rand grabs his bow and begins to fire arrows but even at close range they do very little damage. Tam pulls out a heron marked blade from under the bed and begins to fight off the trolloc with a surprising level of skill. They manage to kill the vile creature, but at the expense of a grave injury to Tam.

As the initial shock of the attack wains, the villagers begin to fight back, no longer easy lambs for the slaughter. Egwene and Nynaeve fight back with what strength and rage they posses but are rescued from certain death by Moiraine Sedai. Weaves of air rip a trolloc in half. Just as they believe they have found a short reprieve a retreating trolloc grabs Nynaeve by her braid and drags her off into the night. Gathering more strength Moiraine throws fire and lightning at the trollocs as Lan protects her with his sword.

Perrin and his wife Layla fight off trollocs who have entered the forge. Perrin goes into a frenzy hacking at a trolloc that he had just killed. Over and over again he swings his axe, blood coating his hands and face as he continues hacking away in a blind rage. Layla approaches him from behind and Perrin turns, his axe sinking into her abdomen. The realization of what he has done is painted in the anguish on Perrin’s face. He has killed his wife!

Outside the village still fights for its life. Trollocs pour in, more than enough to overwhelm the village even with Moiraine Sedai. As Moiraine Sedai takes a trolloc blade to the shoulder she can feel her mission falling to pieces. With Lan at her back she draws on even more of the One Power, pulling stones from the Inn and ripping the earth to vanquish the rest of the trolloc hoard.

The Winespring Inn collapses and so does Moiraine, having used all her strength to save the village and the four ta’veren that she sought. Lan uses his own body to shield her from the falling debris. As the sun finally comes up Rand arrives to witness the destruction. He seeks Nynaeve to help Tam, but it is Moiraine that steps in to heal him and deliver the news. It is them that the trollocs hunt; one of them is the Dragon born again.

Rand demands answers from Moiraine. He wants to know why the trollocs came shortly after she arrived. Moiraine explains that twenty years ago, there was an Aes Sedai who was blind, and yet she possessed the ability to see glimpses of the turnings of the Wheel of Time. This Aes Sedai foretold that there would be one person who could stand against the darkness. It was the Dragon, and he has been reborn as one of the four villagers: Rand, Perrin, Mat, or Egwene. To save their family and friends and keep yet another trolloc hoard from descending upon the Two Rivers, they must leave at once. Moiraine assures them that the trollocs will follow and that their only hope is to reach the safety of Tar Valon. There is distrust in the eyes of the Two Rivers characters, but none hesitate to leave if it means saving those they love.

The episode concludes with final voice-over from Moiraine as she, Lan, Egwene, Rand, Mat, and Perrin leave the Two Rivers on horseback. “The Wheel of Time turns, and ages come and pass, leaving memories that become legend, legend fades to myth and even myth is long forgotten when the age that gave it birth comes again. In one age, called the Third Age by some, a wind rose in the Mountains of Mist. The wind was not the beginning. There are neither beginnings nor endings to the turning of the Wheel, but it was a beginning.” 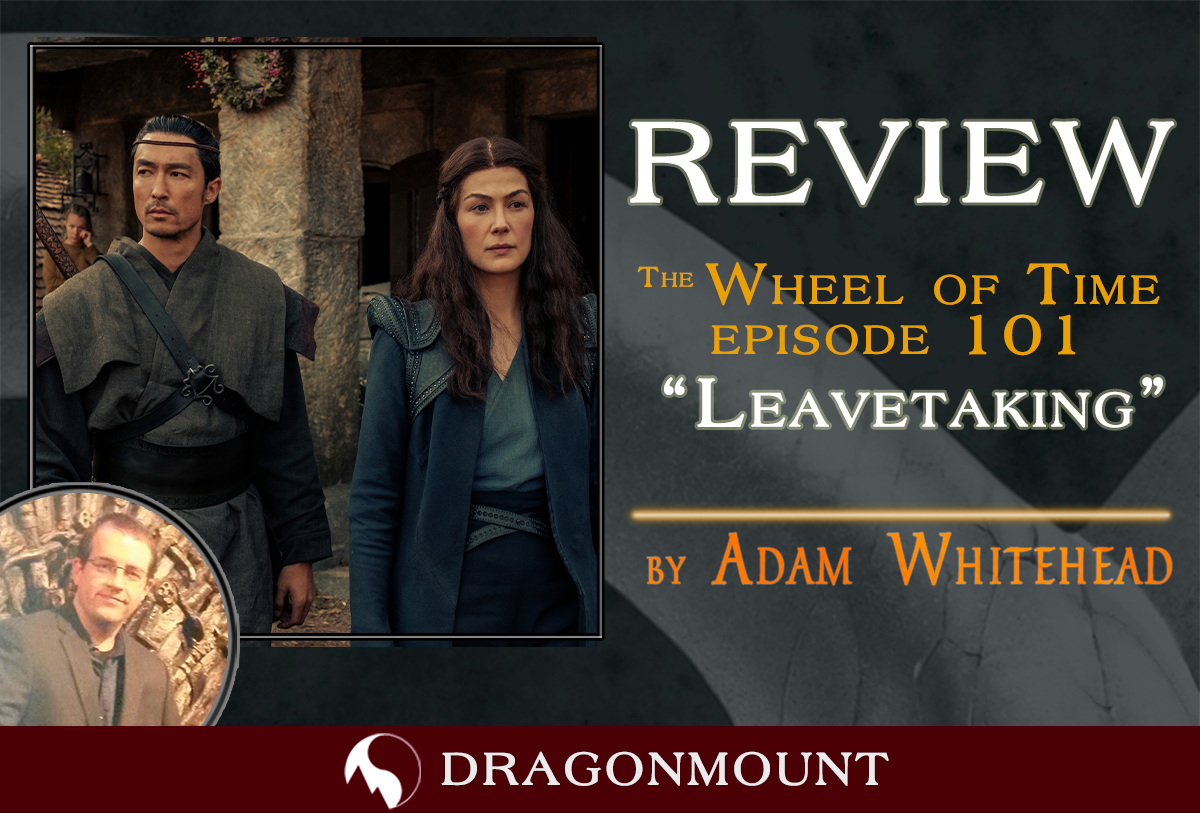 Promotional Images from this Episode 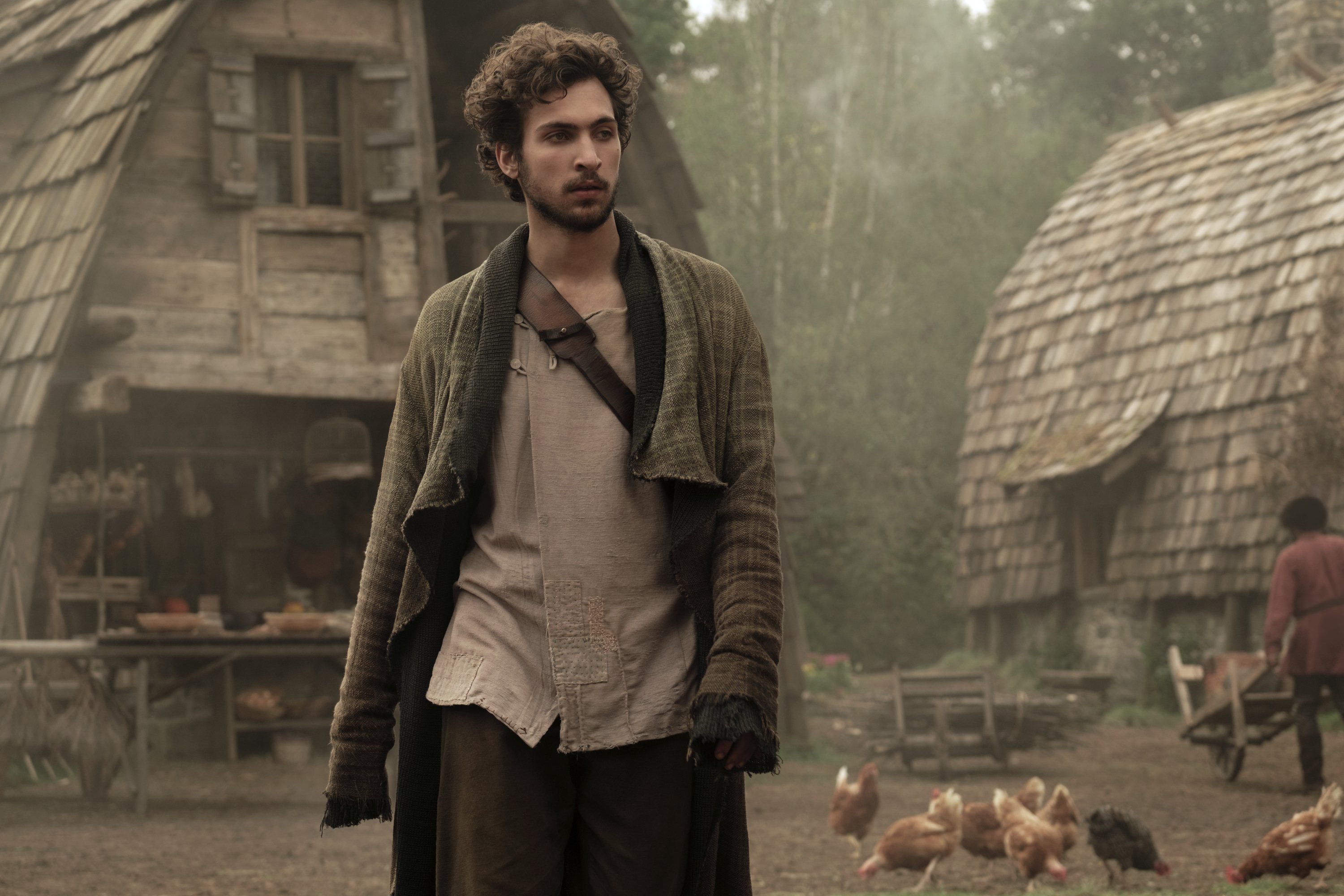 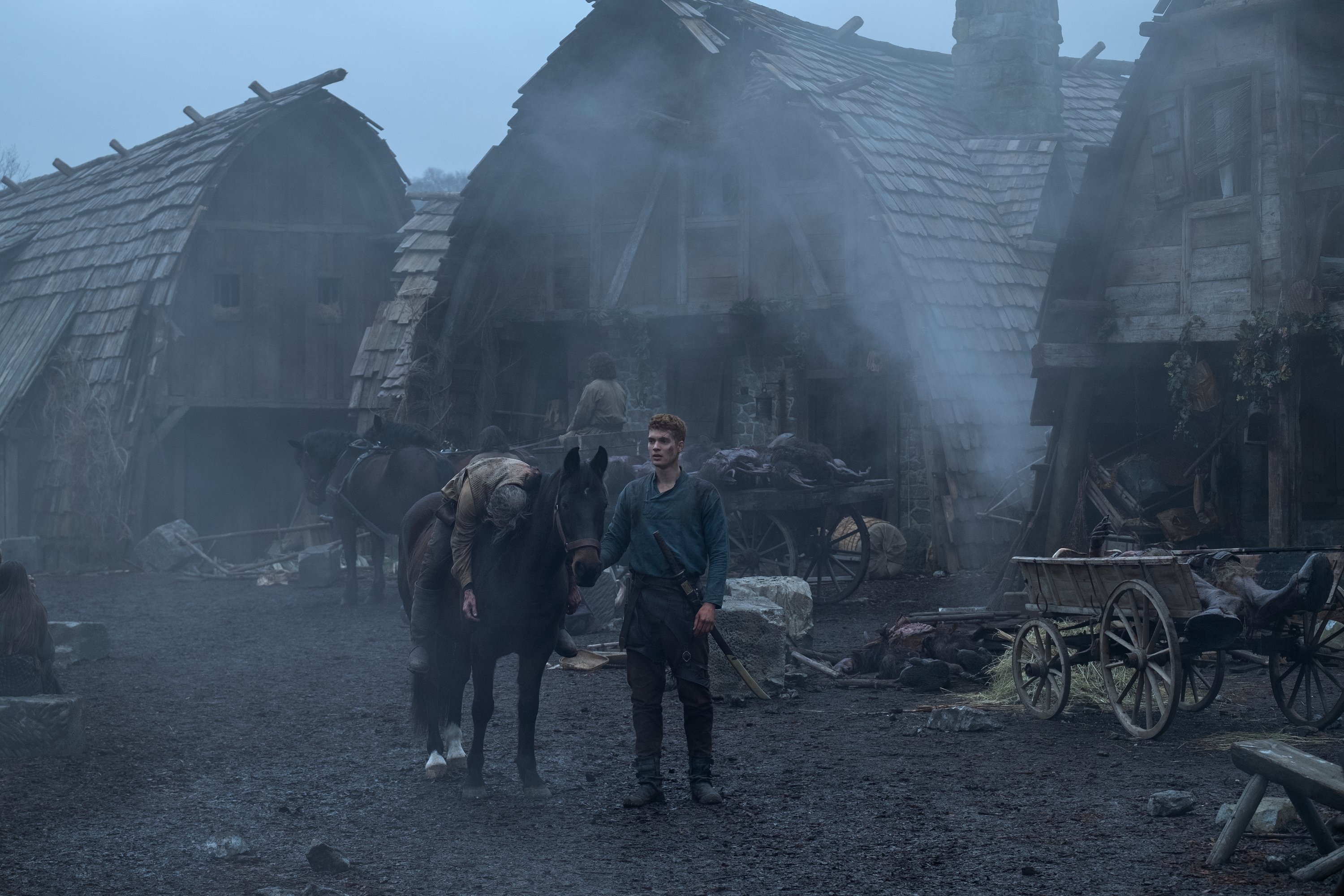 The title of this episode was originally announced by showrunner Rafe Judkins via his social media on July 23, 2018. A video featuring the cast & crew conducting an initial table read of this episode was posted online on October 2, 2019. The set of the Two Rivers was painstakingly created for this pilot episode, and then burned to the ground.