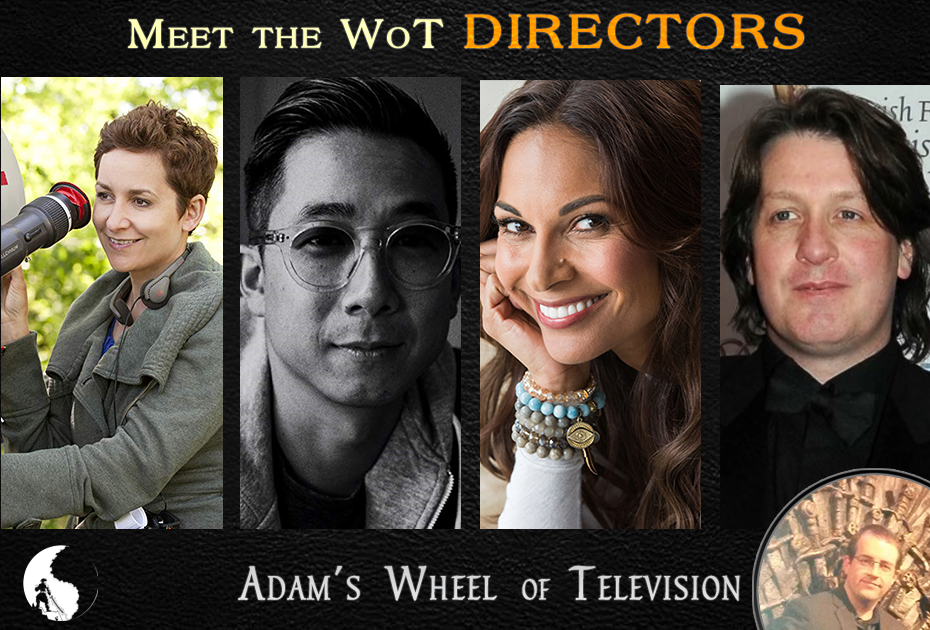 All the evidence is pointing towards the first season of The Wheel of Time having eight episodes in total, with four directors tackling two episodes apiece. First up is Uta Briesewitz who is handling Leavetaking and Shadow’s Waiting, followed by Wayne Yip with A Place of Safety and The Dragon Reborn, then Salli Richardson Whitfield with Blood Calls Blood and The Flame of Tar Valon. Ciaran Donnelly will be helming the last two episodes whose titles have not yet been confirmed.

Television directors are notable in that they have far less power than in film, where they are the primary creative force. In television, directors are needed more to film in accordance with the “house style” which will be laid down in the first episode by the writers, producers and the director of the first episode (in this case, Uta Briesewitz). The job of all the directors who come after is to fit into that style and into the challenging filming schedule. That’s not to say they can’t bring their own filming styles and ideas to the party, but they have less room to be improvisational. But the choice of directors is still an important one for a TV show, and almost every show has a cadre of preferred directors the producers want to use as much as possible because their vision for the show adheres closest to that of the showrunners: think of Miguel Sapochnik on Game of Thrones, Jack Bender on Lost, David Nutter on The X-Files or Michael Rymer on Battlestar Galactica.

So, who are our directors?

Uta Briesewitz is a German film-maker who started off as a cinematographer, planning the photography and lighting of each scene in conjunction with the director. After small-scale films and TV shows, she got her big break in 2002 when she was recruited by David Simon to work on his HBO masterpiece, The Wire. She established the photography aesthetic of the whole show, resulting in its mix of documentary-style film-making with more dynamic dramatic moments.

She continued to work with HBO on shows including John from Cincinnati, Hung and True Blood. HBO also gave her a first break at directing, with an opportunity to direct episodes of Hung. She subsequently directed episodes of Weeds, Orange is the New Black, The 100, Jessica Jones, Iron Fist, The Defenders, The Deuce, This is Us, Altered Carbon, Westworld and Stranger Things, building up a strong rep in the process. Her work on the Season 2 Westworld episode “Kiksuya” has been particularly praised.

Briesewitz also has a producer’s credit on The Wheel of Time, which is standard practice for the director of the first episode since they are also intimately involved in casting the main actors and establishing the look and feel of the whole show which will be adhered to for years to come.

Wayne Yip is a British director who started his career in music videos in the mid-2000s. He then worked on short films for several years, winning a BAFTA Award in 2007. He moved into television in 2010 with Coming Up, Secret Diary of a Call Girl and Utopia. He began branching into filming for both British and American productions, and in recent years has worked on Dirk Gently’s Holistic Detective Agency, Preacher, Cloak & Dagger, Doctor Who, Into the Badlands, Doom Patrol and Hunters.

Yip has gained a reputation for working fast and reliably at a high level. In 2019 alone he directed eleven episodes on seven different shows, including the very challenging Into the Badlands which has extensive visual effects, martial arts and sword-fighting set pieces in every single episode.

Salli Richardson-Whitfield is best-known as an actress. She started her career in the early 1990s in TV shows such as Star Trek: Deep Space Nine, Stargate SG-1, CSI: Miami and House. Her best-known role was as a series regular in Eureka (aka A Town Called Eureka outside the US) from 2006 to 2012. More recently she’s appeared in shows like Criminal Minds, NCIS, Castle and Black Lightning.

She moved into directing in 2011 with the short film Grace. Since then she has directed episodes of Eureka, Scandal, Lethal Weapon, Agents of SHIELD, Luke Cage, Black Lightning, The Punisher, The Magicians, American Gods, Doom Patrol and Altered Carbon. Like Yip she’s gained a reputation for working fast and effectively, with more than a dozen episodes of television shot last year alone.

Irishman Ciaran Donnelly is the most experienced of the four directors, beginning his career in the 1990s with short films before moving into TV movies at the end of the decade. His TV work includes Cold Feet, Spooks, Donovan, The Tudors (which he work on with Maria Doyle Kennedy), Camelot, Once Upon a Time, Vikings, Krypton and Altered Carbon.

See more about what our team thinks of the Season 1 directors on The Wheel of Time Community Show on YouTube.

We also now have confirmation that the composer for the show will be David Buckley. Buckley is a British composer now based in the USA. He has worked as a composer on films including Jason Bourne and Angel Has Fallen; TV series including The Good Wife, The Good Fight, Killing Lincoln and The Gifted; and video games including Metal Gear Solid 4, Call of Duty: Ghosts and Batman: Arkham Knight.

You can listen to a selection of Buckley’s work on Spotify.

Please let us know what you think of the creatives discussed today. Have you seen or heard any of their work? Any suggestions for directors for Season 2? As usual and until next time, peace.