We examine five minor characters that might get expanded roles in the upcoming Wheel of Time TV show. 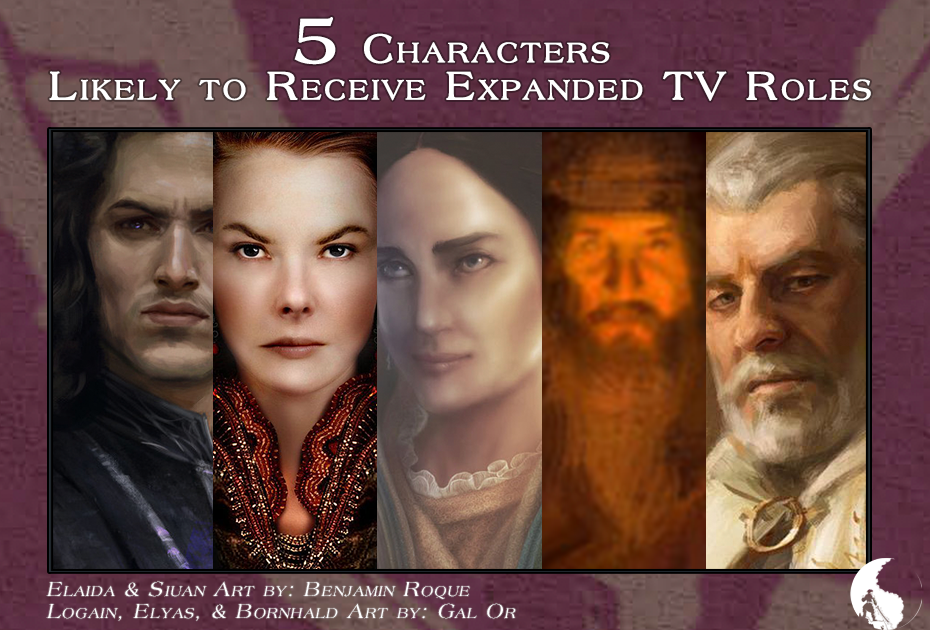 I recently wrote about the 5 Things to Expect from the Wheel of Time TV show, and one of those “things” was expanded roles for minor characters from the books. We’re going to lean into that idea a bit further here and explore which characters I anticipate will seemingly be more important on TV than they were in Robert Jordan’s books.

First, the same disclaimer from last time: although I’ve been in touch with some folks at Amazon and from the production, I have no official association with the show. In the early 2010’s I was a consultant to the producers who were seeking to adapt The Eye of the World into a feature film. I helped them and their writers come up with story ideas, and helped pitch those ideas to various other executives. A long time ago I was an independent filmmaker, but today, I write books, among other things. And, of course, I’ve been closely tied to the WoT franchise for 20+ years. So if you’re asking, “Why are your ideas anything more than random speculation?”, well, I like to think I’ve seen enough to have a good instinct for this stuff by now. (Also, I haven’t been wrong yet with my 5 Things to Expect!)

But who knows, maybe I’ll be off this time. ?

Adaptations, by their very nature, require change. And most of the time, it begins with the characters. The jury is completely out on how Rafe Judkins and his team will adapt the 7 characters who’ve been cast so far: Rand, Egwene, Perrin, Nynaeve, Mat, Lan, and Moiraine. All of those characters are most certainly going to change, and because their roles are so big (especially the Two Rivers 5), it’s practically impossible to predict what the team will do with them.

So let’s focus on 5 secondary characters from the series that should have a bigger presence on TV than they did in the early books. I’m going on the assumption that season 1 will focus almost exclusively on the story events from The Eye of the World, with maybe some flashbacks or glimpses of later books in order to establish key ideas.  (For my reasoning on this, see my 5 Things to Expect… article).

This is an easy one. We know Logain will have an expanded role because Rafe said so during a Twitter Q&A in September 2018:

I really like Logain and plan to not only retain, but expand, his role in series.

The question is, how will his role be expanded? My hunch is that Rafe and his team showcase Logain as a terrifying example of what happens when you’re a man who channels saidin. The first book hints at this, but I fully expect the show to try and horrify us (and Rand) so that we really understand what a terrible thing it is to channel. I would not be surprised if we see him in chains, see him being beat up by the Red Ajah (Elaida!), and probably gentled on screen. Violently.  We don’t see Logain’s gentling happen in the books. We just meet him later after the deed is done. But come on, wouldn’t it be cool to see on screen?

“But he gets gentled in Tar Valon!” you say. “And the characters don’t go to Tar Valon!”

Yes, that’s all true… in the books. But in this TV adaptation, there’s no reason Logain can’t be gentled in Caemlyn, and no reason Rand and his friends can’t visit Tar Valon instead.

Episode 4 of the first season is titled, “The Dragon Reborn.” Good titles usually contain multiple meanings. If I were a betting man, I think we’ll see a lot of Logain in that episode.

Elaida becomes one of the primary antagonists in the book series, and she has a very convenient cameo role in the first book. Not only that, but she steals the show and anchors one of the best scenes in the entire series is chapter 40 where she secretly whispers her Foretelling to Rand.

She’s too good of a character to only use for a single scene, especially if the producers want to convince a talented actress to portray her for many seasons going forward. I fully expect Elaida to not only be in every season, but for her to be groomed as one of the show’s primary recurring villains.

She also makes a great antagonist to Moiraine and to ….

Count on the Amyrlin Seat herself, Siuan Sanche, to be present in this TV series from the get-go. It’s easy to establish her connection with Moiraine at any point.  Perhaps Moiraine sends her friend (and boss) a pigeon carrying a message to the White Tower. Or maybe Siuan is part of the caravan that gentles Logain, so we see her in that context.

Whatever or however it works out, Siuan is Moiraine’s lifeline to the White Tower, and that’s an interesting story to explore in a TV adaptation.

Having Siuan more present in the show would give us ample opportunity to see her square off with Elaida. It would establish their rivalry early on, setting up a much more powerful smackdown when Elaida stages her coup in a later season.

Finally, let’s not overlook the fact that episode 6 of the first season is rumored to be titled “The Flame of Tar Valon.”

Of all the characters on my short list, this is the one I’m most shaky on. I could see the writers going in either direction with Elyas. On one hand, they could just cut him entirely from the show. There are plenty of other ways for Perrin to find the wolves and establish a connection to them.  Elyas could also maintain his brief cameo role in the books (and really, the series). But in the end, I think he’s just too interesting of a character to not expand for the show. Just as Logain represents a worst-case scenario for Rand, Elyas could be that same thing for Perrin.

It’s a toss-up, but I expect we’ll see Elyas have an enlarged role, at least for the duration of season 1. The best odds are that he  first shows up in episode 3, “A Place of Safety,” which is the name of the chapter where he first appears in the book. I doubt we’ll see him beyond a full first season though. Perhaps he makes a great character to sacrifice in a noble, on-screen death?

Yes, I’m aware that he doesn’t die in the first book, but he also disappears for many books. It’s hard to convince an actor to show up, play a role, and vanish for multiple seasons before bringing him back. I feel like this could be a situation where the producers need to either decide if they can use him to his full potential for a single season, or greatly expand him across multiple connectives seasons.

My favorite surprise character to likely get an expanded role for the TV show is  Bornhald (senior). He’s a Lord Captain of the Children of the Light, aka the Whitecloaks, aka Randland’s equivalent of the alt-right, women (channeler)-hating, witch-hunting, militant bad guys. His son Dain is also not a nice guy, and together, this father-son duo cause a lot of trouble in the first book for the heroes, most notably Perrin, Egwene, Nynaeve, Moiraine, and Lan.

My hunch is that we’ll see more about Geofram’s driving passion to kill darkfriends (or, at least, those he deems to be darkfriends), and an expanded relationship with Dain, who will eventually inherit his father’s mantle.

The reason I’m excited to see Bornhald is that he flies under the radar a bit in the book, but he’s also our first real glimpse of the Whitecloaks, which is a fantastic set of villains that the filmmakers can use through the TV series. Like Elaida, Borhald and his son represent flawed humans doing bad stuff for reasons that we (unfortunately) understand and see in our regular life, rather than, say, Ishamael or Padan Fain who are Pure Evil because… uh…reasons.

Some quick honorable mentions for other characters who could see getting expanded roles in the first season of the Wheel of Time:  Loial, Aram, Aginor, Balthamael.

And what about the characters likely to get diminished roles? Well, that’s an article for another day, maybe.

What do you think? Am I onto something, or do you have your own theories? Share below or on our social media.

Logain & Elyas, Bornhald
by Gal Or