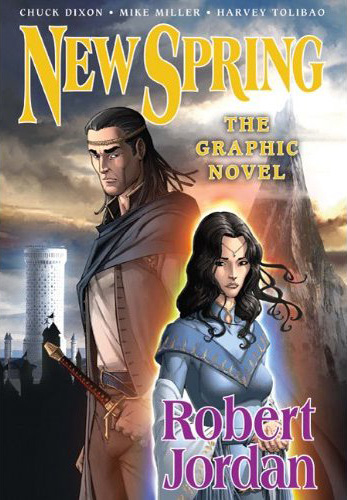 Tor Books will be releasing the full and complete New Spring graphic novel on January 18, 2011.

New Spring is the only published prequel to The Wheel of Time. Written by Robert Jordan, it was originally published as "short" story in 1998 as part of the Legends" rel="external nofollow">http://www.amazon.com/gp/product/0765300354?ie=UTF8&tag=dragonmount&linkCode=as2&camp=1789&creative=390957&creativeASIN=0765300354">Legends Anthology, edited by Robert Silverberg.

The original short story focused on Moiraine and how she met and bonded Lan. Robert Jordan later expanded the story into a full novel (published in 2004). Shortly after that, in 2005, Robert Jordan began working with well-known comic book writer Chuck Dixon to adapt the novel into a series of comic books (produced at the time by Red Eagle Entertainment and Dabel Brother productions). This graphic novel is the culmination those efforts to finally publish the entire collection into a single book.

Here's what Tor's press release says about it:

n the last few years before his death, Robert Jordan worked closely with Chuck Dixon and Mike Miller on the graphic adaptation of New Spring.

The eight full-color issues of New Spring, released between 2005 and 2010, tell the story of the search for the infant Dragon Reborn and of the adventures of Moiraine Damodred, a young Aes Sedai, and Lan Mandragoran, the uncrowned king of a long-dead nation. Adapted by noted comics writer Chuck Dixon with the full cooperation of Robert Jordan, and illustrated by artists Mike Miller and Harvey Tolibao, New Spring will delight any of Robert Jordan's millions of readers.

Tor is proud to collect all eight issues of New Spring in a single volume, which will also include developmental art, script pages, and correspondence between Jordan and Dixon.

In somewhat related news, Tor Books also announced today that they will be publishing two new novels by Brandon Sanderson next year. These novels, which include a new Mistborn short novel and a young adult title, will be released in 2011. More information will be released about these on Brandon" s rel="external nofollow">http://www.brandonsanderson.com">Brandon's website. Their release will not impact the publication of the final WoT novel. Book 14, A Memory of Light is estimated to be published in early 2012.