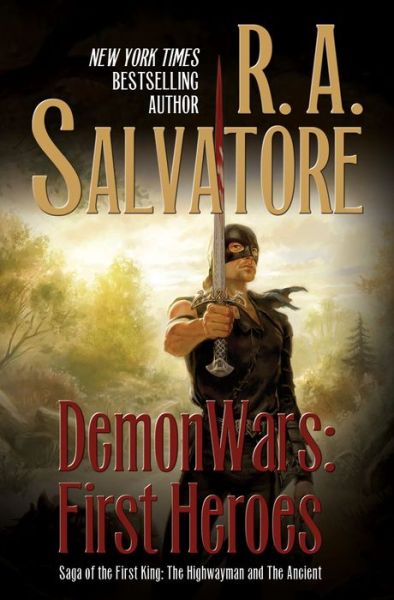 [EDIT:  The deadline has been extended to April 30th, 2014 for anyone who would like to enter!]

Welcome to this special edition of Dragonmount’s Fantasy Review. This month, I want to take the opportunity to present to you the two books that make up R.A. Salvatore’s latest release: DemonWars: First Heroes. This book is not a new book, but instead encompasses two books: The Highwayman (2004) and The Ancient (2008). The two novels are the beginning of Salvatore’s epic First King series, a prequel to his popular DemonWars Saga.  And to celebrate this new release, Tor Books is giving away one copy to our Dragonmount readers!  Post in the comments section below before April 30th, 2014, and you could win a free copy.  The winner will be randomly selected from all those who leave a comment (unfortunately, only residents within the US or Canada can win).

Or, you can buy these books separately in Dragonmount's DRM-free eBook store: The Highwayman and The Ancient.

The Highwayman is the origin story of the series’ hero Bransen Garibond. Bransen was born to parents who were members of two vastly different religions. His father, Brother Bran Dynard is a priest of the church of Blessed Abelle; his mother, Sen Wi, is a mystic of Jhesta Tu, a foreign and mysterious philosophy that Brother Dynard set out to study.  Due to circumstances of fate, Bran is killed and Sen dies in childbirth, leaving the boy to be raised by his father’s dearest friend.

Bransen is born with severe birth defects, causing him to be the source of ridicule in his small hometown. As he grew up, he discovered his father’s notes on Jhesta Tu, and began practicing the methods of his mother’s people. After spending several years in a Abellican monastery, he finds a magical gemstone (a powerful piece of the Abellican faith) that allows him to walk, talk, and live the life of the Highwayman.

As the Highwayman, Bransen becomes a local Robin-hood type hero. He robs from rich, helps out the poor, and romances his childhood crush, the woman he later marries.

The world of the Highwayman is dangerous. The Abellican faith is still in its infancy; the church was founded less than a century before the events of the series, and the Abellicans are struggling with other religions. Bransen’s father was ostracized for marrying a Jhesta Tu heathen, and Bransen was later forbidden from studying his mother’s religion.

The background plot of the Highwayman involves a war. Pryd Holding, where the story is set, is at war; there is a prince who is desperate to produce an heir, religious conflict, and the ravages of war on the common folk.

The Ancient picks up shortly after the end of Highwayman. After the events of the first book, Bransen, his wife and mother-in-law must flee Pryd Holding, and are headed south, when Bransen is tricked into traveling to a distant land to help fight in the war. The story gets complicated when Bransen loses his Abellican gem, making it next-to-impossible for him to fight.

The war is more readily evident throughout The Ancient. The Samhaist religion, along with the Ancient Badden, the most powerful of their numbers, wish to destroy the Abellican order that threatens them. A small monastery is built in the shadow of the Ancient Badden’s palace, on a lake near a small, tribal civilization that the Abellicans hope to convert.

I like the exploration of Bransen as a disabled hero, and how he looks back to his parents and their varying faiths to overcome significant birth defects. His wife loves him both as the Highwayman and as his ‘alter ego’ the Stork, showing that this disabled hero loves and is loved, no matter what. The first book sets the stage for the remainder of the Saga of the First Kings and for the later events in the DemonWars Saga.

I have not read all the DemonWars books, and thus I felt like I was missing out on some of the references within the story. As prequels, I’m certain that the two books contain a few hidden gems of references that long-time readers of the DemonWars will enjoy. I feel like I missed out on something there.

Missing references is a minor complaint, one that can be rectified with a read of the complete DemonWars Saga. The only real big problem I had with either book was in the Ancient. Bransen was tricked to travel away from his wife and mother-in-law, conscripted in a war. I missed the interaction between Bransen and his family. His love and his wife, gave Bransen a reason to struggle, something beyond revenge or money, and away from his wife, I found Bransen to be a little colder, less relatable.

If you’ve read the complete DemonWars Saga, these books (or the special DemonWars: First Heroes edition) will be a great read. If you have not read the DemonWars, the stories are still fascinating, and a good read, but be prepared to possibly miss references to the other works.