Our Cage Match Champion Is... 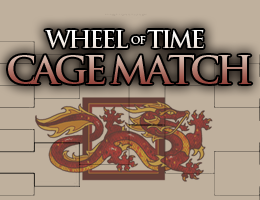 Mat has just been crowned our Cage Match King! Although many thought it couldn't be done, he beat his foe, Moridin. We are also pleased to report that Bela won the consolation match against Narg.

We hope you enjoyed participating in the cage matches this year. How did you like the matches? Would you like us to do them again next year? Feel free to share your feedback and congratulate Mat either here or in this thread.