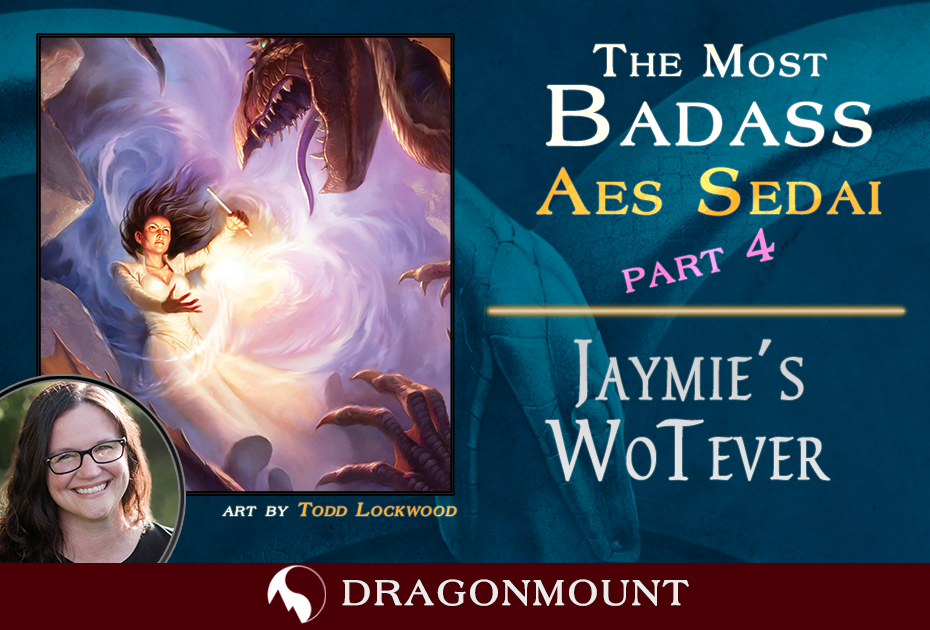 Affecting change out in Randland or as Sitters in the Hall, who's the biggest badass of them all?

The folks from Tor Books have posted this press release:   When: Monday November 8, 2010 from 1:30 PM — 2:30 PM (EST)   On his last day on tour for TOWERS OF MIDNIGHT, Brandon Sanderson (@brandonsandrson) will be stopping by Twitter for an hour to discuss all things #WoT, #TofM, #WoK, and maybe even #aMoL! Join Brandon and the rest of us by following the #portalstone hashtag…but be forewarned if you haven’t read, spoilers may be discussed!   We'll also have another member of "Team Jordan" on-hand: the cagey Maria Simons(@MariaLSimons), Robert Jordan's literary assistant for 12 years, whose famed poker face could face a sore testing in the twitterverse. Special guests @Theoryland (Matt Hatch of Theoryland.com), @zemaille (Linda Taglieri of the 13th Depository WoT blog), @portalstones (Steve Godecke of Portalstones.com), and maybe even @dragonmount, if someone can drag Jason and Jennifer from their day jobs. So brush up those theories and watch out for RAFO cards, I hear Brandon’s getting quite the throwing arm…   If you’re new to Twitter and would like join us, Twitter 101 does a nice job explaining the basics. After you sign-up, search or click the #portalstone hashtag to follow along. To direct a question or comment, mention the specific user(s) by username, preceded by the @sign.   If you have any questions or problems, your friends here at Tor (@torbooks) and Tor.com (@tordotcom) will be on hand to help. And possibly, maybe just maybe…give some cool stuff away.   Hope you can join us!   Best,   Justin (@jgolenbo)

Towers of Midnight is here!

Hi everyone, this is Jennifer Liang over at the Midnight Release party for TOWERS OF MIDNIGHT in Provo, Utah with author Brandon Sanderson.   We're streaming live video from the event all night. You can watch us right here:   http://www.ustream.tv/flash/live/1/1790400?v3=1"/>http://www.ustream.tv/flash/live/1/1790400?v3=1"/>   You can chat with us live by going to bit.ly/4thlive   We'll have a full report from our Tower Guard volunteers posted on Dragonmount very soon. And Brandon and Harriet will both be signing in Sacramento tomorow. You can see the full tour schedule here. And you can see all our TOWERS OF MIDNIGHT coverage in our round up.   And because we like Jason, here's the TOWERS OF MIDNIGHT trailer again.   http://www.youtube.com/watch?v=apJJ0NzOXEg?fs=1&hl=en_US&color1=0x234900&color2=0x4e9e00">http://www.youtube.com/watch?v=apJJ0NzOXEg?fs=1&hl=en_US&color1=0x234900&color2=0x4e9e00">

An important message from the Empress of Seanchan

U.S. Citizens: the Empress of Seanchan (may she live forever) has an important message for all of you. She requests commands you to go out and vote on November 2nd, which also happens to to be the release date of a certain book we keep talking about.   If you happen to live in her district, you might be well advised to cast your vote for her.   http://www.youtube.com/watch?v=Yknv169AYUQ?fs=1&hl=en_US&rel=0&hd=1&color1=0x3a3a3a&color2=0x999999">http://www.youtube.com/watch?v=Yknv169AYUQ?fs=1&hl=en_US&rel=0&hd=1&color1=0x3a3a3a&color2=0x999999">   Thanks to Andrew" rel="external nofollow">http://twitter.com/andrewmjordan">Andrew Jordan for producing this fun video.

<p>The 4th Age podcast presents Episode 94, WoT You Need to Know about the upcoming <em><strong>Towers of Midnight</strong></em> signing tour! Virginia and Spencer highlight where the 4th Age members will be doing a live streaming podcast for you! ToM will be released on November 2nd, 2010. Check out <a href="http://www.dragonmount.com/index.php/News/tom/book-tour-info-for-towers-of-midnight-r33">Dragonmount.com</a> for all the details.</p><p>We are jumping ahead in number sequence here to get this out to you all before the release date for ToM. Never fear – all of the podcasts in between WILL be posted now that the podcast page and the new Dragonmount server are playing nicely together.</p><p><span style="color: #ff0000;"><strong>ATTENTION! THERE ARE NO TOWERS OF MIDNIGHT SPOILERS!</strong> </span><em>But spoilers on ALL the other books are VERY likely! </em>There will be spoilers, just none for ToM! If you haven’t read all the way through the Wheel of Time, THERE WILL BE SPOILERS of all previous books! Maybe of other series, too…. we will try to give warning.</p><p>Hosts: Virginia and Spencer</p><h6>Editor: Spencer Music by: Josh Needleman His website is at <a href="http://www.joshneedleman.net/">www.joshneedleman.net</a> and he has the music available to hear on his MySpace page at <a href="http://www.myspace.com/joshneedleman">www.myspace.com/joshneedleman</a>. It’s title is <em>Floodgate</em>. Thanks, Josh!</h6><div><strong><a href="http://www.dragonmount.com/Podcast/Media/dm-4thAge-094.mp3">Download this Episode now</a></strong></div><img src="http://feeds.feedburner.com/~r/4thAge/~4/VHyO4VS0b40" height="1" width="1"/>

TOWERS OF MIDNIGHT Round Up