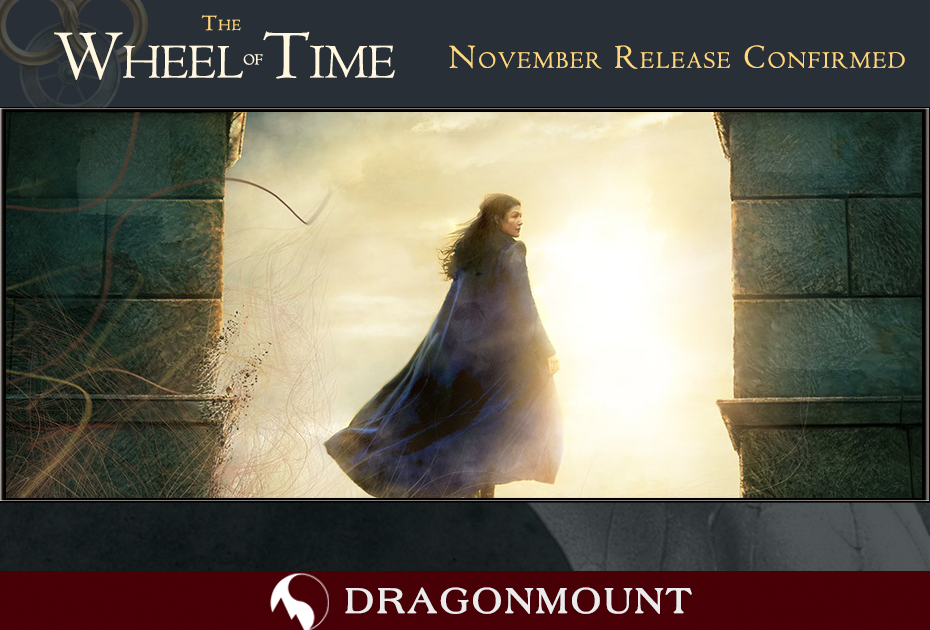 Seamas Gallagher, a well--known Wheel of Time artist whose work can be seen on our main banner above-- has been given an official license to produce and sell high-quality WoT art prints.   The first batch is now available.   View more os Seamas's art at www.seamasgallagher.com

Team Jordan Interview! The 4th Age podcast presents Episode 79, a phone interview with <strong>Maria Simons</strong> and <strong>Alan Romanczuk</strong>, who are an integral part of Team Jordan. Alan and Maria were been assistants to Robert Jordan for many years before his passing, and they continue on with Harriet Rigney, RJ’s widow and editor, and Brandon Sanderson, the talented author, to bring us the conclusion of the amazing series of books that comprise The Wheel of Time.   We are still somewhat out of number sequence and very behind on posting episodes. Never fear – all of the podcasts in between WILL be posted now that the podcast page and the new Dragonmount server are playing nicely together.   <strong>ATTENTION! THERE MAY BE SPOILERS!</strong> No Towers of Midnight spoilers, but information from ALL the other books are VERY likely! There will be spoilers, just none for ToM! If you haven’t read all the way through the Wheel of Time, THERE WILL BE SPOILERS of all previous books! Maybe of other series, too…. we will try to give warning.   <strong>Special Guests: Maria Simon and Alan Romanczuk</strong> Hosts: Andrew G, Virginia, Spencer and Marc Editor: Jessie R <strong><a href="/Podcast/Media/dm-4thAge-079.mp3">Download this Episode now</a></strong>

Tor Books will be releasing the full and complete New Spring graphic novel on January 18, 2011.   New Spring is the only published prequel to The Wheel of Time. Written by Robert Jordan, it was originally published as "short" story in 1998 as part of the Legends" rel="external nofollow">http://www.amazon.com/gp/product/0765300354?ie=UTF8&tag=dragonmount&linkCode=as2&camp=1789&creative=390957&creativeASIN=0765300354">Legends Anthology, edited by Robert Silverberg.   The original short story focused on Moiraine and how she met and bonded Lan. Robert Jordan later expanded the story into a full novel (published in 2004). Shortly after that, in 2005, Robert Jordan began working with well-known comic book writer Chuck Dixon to adapt the novel into a series of comic books (produced at the time by Red Eagle Entertainment and Dabel Brother productions). This graphic novel is the culmination those efforts to finally publish the entire collection into a single book.   Here's what Tor's press release says about it:   You can pre-order the book now from Amazon.com or find it at your local bookstore.   http://rcm.amazon.com/e/cm?lt1=_blank&bc1=000000&IS2=1&nou=1&bg1=FFFFFF&fc1=000000&lc1=0000FF&t=dragonmount&o=1&p=8&l=as1&m=amazon&f=ifr&md=10FE9736YVPPT7A0FBG2&asins=076532380X" style="width:120px;height:240px;" scrolling="no" marginwidth="0" marginheight="0" frameborder="0">   In somewhat related news, Tor Books also announced today that they will be publishing two new novels by Brandon Sanderson next year. These novels, which include a new Mistborn short novel and a young adult title, will be released in 2011. More information will be released about these on Brandon" s rel="external nofollow">http://www.brandonsanderson.com">Brandon's website. Their release will not impact the publication of the final WoT novel. Book 14, A Memory of Light is estimated to be published in early 2012.

Dragonmount is now on Facebook.com. If you're a member of Facebook, please go to www.facebook.com/dragonmount and "Like" our page.   By doing so, you'll get regular commentary about news, developments, and insight into the Wheel of Time from both myself (Jason Denzel), and Jennifer Liang (DM co-webmaster, and convention chair for JordanCon). Jennifer and I regularly use the @dragonmount Twitter account to chatter almost daily about our various experiences with the franchise. These updates will now be mirrored onto Facebook, allowing you to follow us in either location.   (And for those of you who've been paying attention: yes, we've actually been on Facebook for a while now, but the "group" we setup wasn't equipped to mirror our twitter commentary.)   We're looking forward to expanding our community to you on Facebook. See you there!

Tor Books recently announced that the digital eBook edition of Towers of Midnight will be available on January 31. Here's what they http://torforge.wordpress.com/2010/11/12/towers-of-midnight-e-book-coming-in-january-2011/" target="news">wrote on their blog:     The eBook will be available from all the normal vendors including Amazon, BN.com, Borders, etc.

The 4th Age Podcast is BACK in iTunes

Hey folks, Marc here, from <a href="/Podcast">The 4th Age Podcast</a>.   Over the last little while, many people have noted that the iTunes stream has been down. This was, without too much techy talk, because Dragonmount.com was undergoing some major reworks, and the feed that made iTunes know what files to get, and when / what to update, was broken. Unfortunately, it wasn't a real easy fix, to keep the old feed the same, and iTunes wasn't really helpful in allowing us to keep things as they were.   So there is now a brand new 4th Age podcast entry in iTunes - as the old one is no longer working - the old one exists there for archival purposes. This new feed is finally up and running properly, and it downloads all of the old episodes (minus most of the TGS recap series from 76-92 - they're being slowly implemented, but aren't all there just yet).   So, if you wish to sign up and get the NEW 4th Age Podcast, click the following link:   <a href="http://ax.itunes.apple.com/ca/podcast/the-4th-age/id401516810#ls=1">iTunes 4th Age Podcast Store Link To Subscribe</a>   This should open iTunes up to the new 4th Age podcast, and allow you to subscribe. If you want just the feed itself (for either an RSS reader, or another program to get podcasts (Winamp, Media Go, etc), then THAT URL is:   http://feeds.feedburner.com/4thAge   Unfortunately, you cannot copy the old files into the new directory and have it work - I tried that last night. So you can either keep all the old with the old (if you have them already), or else re-download them with the new feed, which has them all as well, and will have the future episodes we release.   The 4th Age <a href="/Podcast/">home page can found here</a>. And all of <a href="/Podcast/episodes.php">our past episodes can be found here</a>.   Thanks again, and thank you for being loyal WoT / Dragonmount.com / 4th Age fans.   »Marc S 4th Age Podcaster   PS, we are aware of some of the issues with a couple of the episodes, and Jason is working on getting them fixed. New episodes are also still being recorded, and released, as well as the TGS Recap episodes, so you'll be seeing those in the feed over the coming days / weeks.