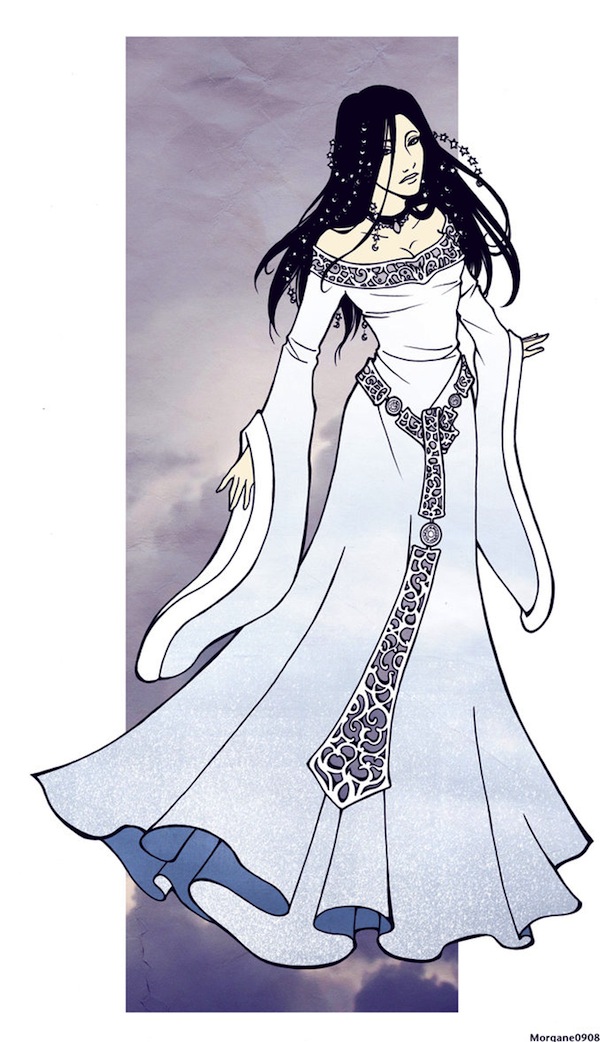 I never expected to dedicate an entire week to a single character, especially not a single bad guy. But Lanfear's stunning beauty has inspired so many stunningly beautiful works that I felt it would be a disservice not to feature them.

During the Age of Legends, Mierin Eronaile was one of the two researchers responsible for accidentally drilling the Bore in the Dark One's prison. Before this, she was briefly involved with Lews Therin Telamon, who she viewed as a path to power. After drilling the Bore, her ambition and jealousy towards Lews Therin's wife, Ilyena Moerelle Dalisar, drove her to swear loyalty to the Dark One. She took the name Lanfear, meaning "Daughter of the Night," and went on to become the most powerful of the female Forsaken, as well as a master of Tel'aran'rhiod. She was sealed into the Dark One's prison at the end of the War of the Shadow, when Lews Therin and the Hundred Companions marched on Shayol Ghul.

The seals on the prison weakened at the end of the Third Age, eventually allowing her to escape. Under the guise of the Lady Selene, she then attempted to convert Rand to the Shadow. Her stalking and manipulations came to a head in Rhuidean, where Moiraine famously saved Rand from her fury by tackling her, throwing her through the stone doorway ter'angreal, and trapping them both in the land of the Finns.

Lanfear has since been reincarnated as the Darkfriend Cyndane ("Last Chance"), who Moridin controls with a mindtrap. Her stated intent has always been to enlist Rand's help in using the Choedan Kal to destroy both the Dark One and the Creator. However, both her desire to see Rand dead and her subjugation by Moridin confuse the issue of her current intentions.

This artist is a master of light and composition. The opulent details and silvery light emphasize the ephemeral beauty and power Lanfear personifies. Her association with the night is beautifully conveyed.

The flawless simplicity of this work--particularly the sparse use of color--strikes a perfect chord. Lanfear's coy smile and hipshot pose perfectly convey her sensuality and arrogance.

I really thought this work was done in watercolor with gold foil, and I was completely floored when I realized it was digital. In any medium, it's a carefully balanced, flawless example of Art Nouveau.

4. Daughter of the Night by Zephyrus (Zephyrus at Dragonmount, ~Gorgaidon at deviantART, and here's her online portfolio and blog):

In terms of the sheer physical beauty of the subject, this is one of the most beautiful depictions of Lanfear I've seen. The washed out colors used here have a sinister feel--appropriate given Lanfear's darker (or shall I say manipulative, sociopathic, and power-crazed) qualities.

I feel a little guilty because I just featured another one of *Rakiah's works last week. But beautiful work deserves praise, and the time is right!

I particularly like the costuming details in this depiction of Lanfear.