Making a heron mark sword (not for sale) 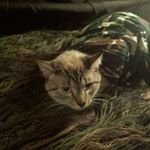 By nicholas.westmiles@gmail.com,
March 8, 2014 in Introduce Yourself