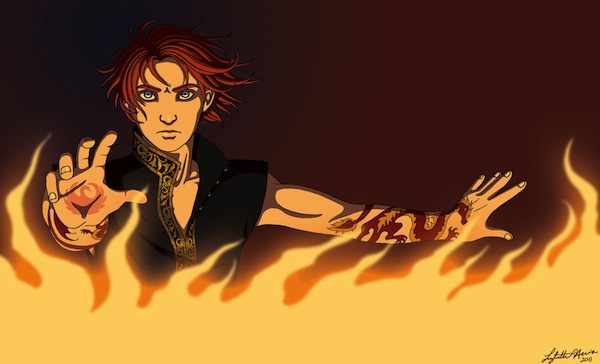 Hey, guys! I hate to be the bearer of bad news, but this will be my final Fan Art Friday blog post. I've loved sharing all my favorite Wheel of Time art with you, plus I'm going to miss all the perks of being Dragonmount staff. (No, they didn't let me read an advance copy of A Memory of Light, but they did let me interview a personal hero...but more on this later. You haven't quite seen the end of me yet.) Most importantly, I had the honor of getting to know our incomparable Front Page Admin, Dwyn, and all our other awesome front page bloggers.

The engineer in me couldn't resist doing a bit of statistical analysis before waving goodbye, so I'm afraid we'll be ending on a very mathematical note.

It's been a good run, with a total of 30 posts, 191 featured artworks, and 241 comments. Interestingly, there is no correlation between the number of works featured in a given week and the number of comments received (correlation coefficient = 0.056). The average number of works featured has been increasing with time (see trendline in figure below) such that, if I were to keep posting, I could expect to be featuring 26 posts per week by week 100 (though the R2 value is only 0.34, so I would not call time a strong predictor...). In case you missed it, this was my most popular post.

Here's a figure mapping comments and works featured over time. As a point of curiosity, the lull in July coincides with Tynaal leaving her post as Rotating Features Blogger and Mashi, Ire, and EP coming on board to fill the void. I guess we're better together!

Now that we're beyond that little bit of silliness, I wanted to wrap up with a shout-out to the Wheel of Time group on deviantART and its awesome founder ~Gorgaidon. If you're craving more Wheel of Time fan art, her group is THE place to go.

And, of course, it wouldn't be Fan Art Friday without some fan art. Here are a whole bunch of artworks that I've collected over the years which, in spite of being awesome, never found their way into a previous post.

The Raven Lord by ~ToranekoStudios

Perrin, Rand, and Mat by ~minniearts

Rand and Perrin by *hamdiggy

Escape the Dancing Cartman by ~Forbis

Wheel of Time by ~nattfrost

And that's all, folks! See you around the forums!