What? A Wheel of Time TV show? 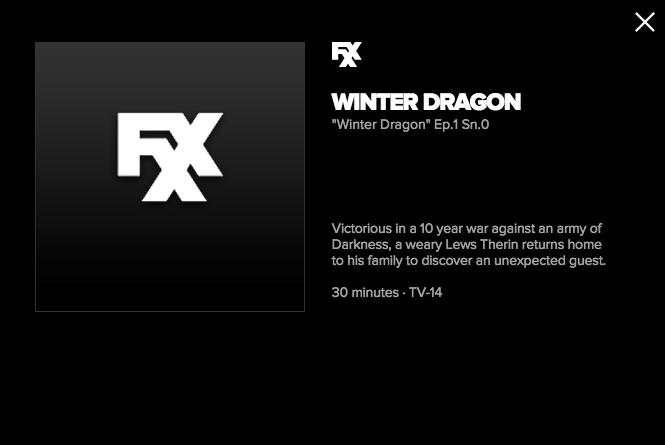 Various fans have alerted us to the fact that FX is airing a TV show tomorrow (Monday, Feb 9) called The Wheel of Time: Winter Dragon.

Lewis Therin returns home to his family after a 10-year war against an army of darkness; he is greeted by an unexpected guest.

Here's what we know:

It is our understanding that The Wheel of Time movie and TV rights are currently owned by Red Eagle Entertainment. REE has had these rights for many years. During that time, they've been involved in several significant efforts to produce a feature film or TV show. We've reported on these efforts in the past, and have supported them at various times. (Full disclosure: I was a consultant for them on some of these efforts.)

We know that Red Eagle's rights expire after 7 years, beginning about a year after RJ died in 2007. Harriet has been very clear about that length of time in the past. (She's called it an "biblical" number of years.) Based on our math, it's our suspicion that the rights are about to expire. Possibly any day. Typically in contracts of this kind, the producers who own the rights need to produce a TV show or movie before the deadline, at which time they receive an extension.  So in order for Red Eagle to keep those rights, and extend the time period they have them, they would have to successfully produce a pilot before that deadline occurs. All they need to do is put out an episode with the name Wheel of Time on it, and use some familiar characters.

We don't know what this episode will look like. There has been no trailer, no advertising, and not even an IMDB entry that we can find.

Other possibilities include that Red Eagle transferred the rights to somebody else, and this new group is producing the show.  We don't know how many episodes have been created. Our guess is that there's just one so far.

Harriet and Team Jordan are currently unable to speak about anything related to the TV or movie rights.

So check your local listings to see when it will be on. Be sure to follow us on Twitter and Facebook to get more information on whether this becomes viewable elsewhere.

If we get more info about what's happening, we'll let you know.

Update: Harriet McDougal has issued the following statement regarding this TV show.

This morning brought startling news. A “pilot” for a Wheel of Time series, the "pilot" being called Winter Dragon, had appeared at 1:30 in the morning, East Coast time, on Fxx TV, a channel somewhere in the 700s (founded to concentrate on comedy, according to the Washington Post).
It was made without my knowledge or cooperation. I never saw the script. No one associated with Bandersnatch Group, the successor-in-interest to James O. Rigney, was aware of this.
Bandersnatch has an existing contract with Universal Pictures that grants television rights to them until this Wednesday, February 11 – at which point these rights revert to Bandersnatch.
I see no mention of Universal in the “pilot”. Nor, I repeat, was Bandersnatch, or Robert Jordan’s estate, informed of this in any way.
I am dumbfounded by this occurrence, and am taking steps to prevent its reoccurrence.
Harriet P McDougal
President and CEO
Bandersnatch Group, Inc.
February 9, 2015