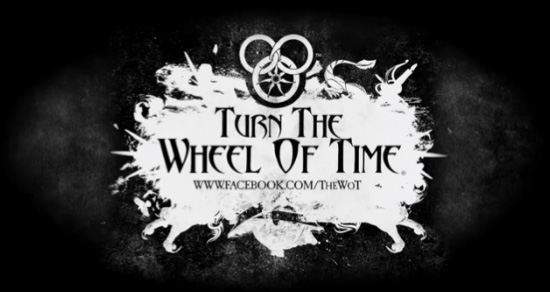 Orbit Books, the publisher for the The Wheel of Time books in the United Kingdom and other territories, has launched an exciting marketing campaign to encourage people to re-engage in the series before A Memory of Light is released next year.

The campaign, called "Turn the Wheel of Time", features a fun video, as well as a free give-away tote-bag to the first 500 people who "Like" their Facebook page. (Only open to residents who live in countries where Orbit publishes their books. Sorry, Americans!) Here's the video:

No release date for A Memory of Light has been announced or confirmed. The video above says it will be out in November, 2012, but that is just speculation on Orbit's part. At this time, expect the book to be released anywhere from mid to late 2012.

As always, keep checking back with our website for the latest and greatest news related to AMOL. You can also follow us on twitter @dragonmount, or at facebook.com/dragonmount