Adam's Wheel of Television: Marketing the Wheel of Time

At some point in the hopefully-not-too-distant future, Amazon Prime’s Wheel of Time TV series is going to hit the airwaves, and the question arises on how are they going to get the show before as many eyeballs as possible? 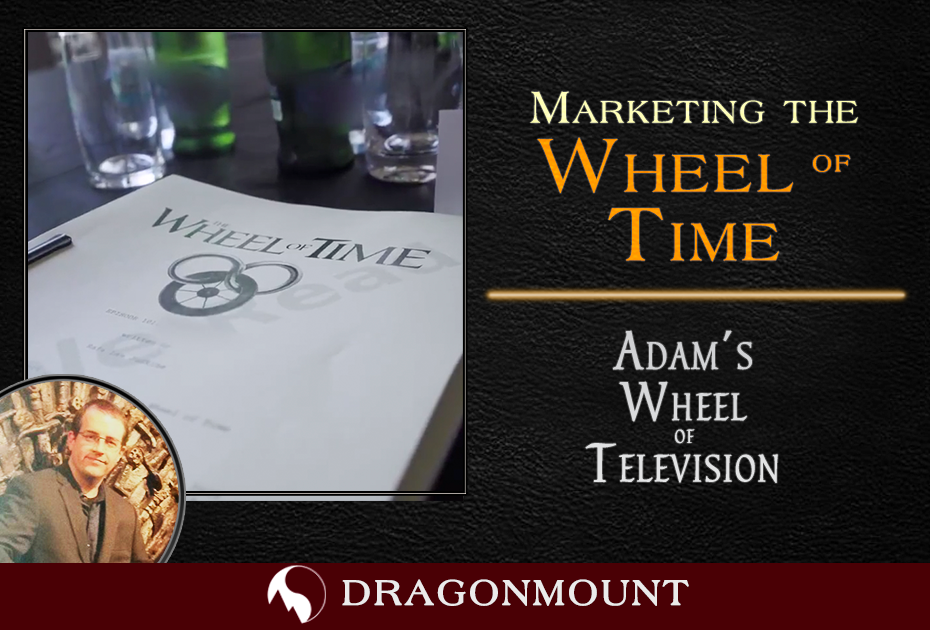 At some point in the hopefully-not-too-distant future, Amazon Prime’s Wheel of Time TV series is going to hit the airwaves, and the question arises on how are they going to get the show before as many eyeballs as possible?

The current television market is glutted with more network, streaming and cable shows than ever before. More than five hundred scripted series – that’s not episodes, that’s series – will air in the United States alone in 2021, and that’s not counting English-language shows from Canada, the United Kingdom, Australia and elsewhere. Getting eyeballs on the show is going to be essential to ensure it survives, but that’s harder than it ever has been before.

Fortunately, The Wheel of Time has some help. Almost 100 million copies of the books have been sold worldwide since 1990. The Wheel of Time is one of the highest-profile and best-known fantasy series in the world, with a vast, international fanbase. Fans have already been talking excitedly about the series for around eighteen months, ever since the first casting and production information began to trickle out, and various Wheel of Time-related phrases and hashtags have been trending on social media. Multiple, high-profile booktubers have been discussing the adaptation for over a year, and high-profile geek websites like Tor.com and io9 have been spreading news as it breaks. Like Game of Thrones before it, Wheel of Time benefits from a passionate fanbase keen to spread the word of the TV show before it even airs, with the bonus that Wheel of Time has a much larger reader base than the Song of Ice and Fire novels had in 2011.

But for the show to be a hit, it has to reach out beyond the core fanbase. Some of the high-profile casting will help. Rosamund Pike (Moiraine) has had a long career in hit films from Die Another Day through Pride & Prejudice, Jack Reacher and The World’s End, through to her massive hit role in Gone Girl (which garnered her an Oscar nomination), and she has plenty of fans willing to check out any project she’s involved in. Rosamund's profile has risen even higher thanks to her Best Actress (Musical/Comedy) win at the Golden Globes last weekend for I Care a Lot. Daniel Henney (Lan) likewise has a keen international fanbase of his work in both American and South Korean cinema and television, particularly his popular stint on Criminal Minds, whilst Maria Doyle Kennedy (Ila) has a strong fanbase from her work in The Commitments, The Tudors, Outlander and Orphan Black, as well as her singing career (among many other projects). The high-profile end of the casting will certainly draw eyes onto the project. Álvaro Morte (Logain) also has a strong following from his work, and recently spoke about his role.

Amazon’s relatively small slate of original programming, at least compared to competitor Netflix, will also help with this: Amazon can afford to put more resources into marketing the show and making people aware it’s on its way, rather than risk the show getting lost in a morass of other shows coming out at the same time. For a long time, it looked like Amazon was lagging a little in the streaming race with Netflix, but recent breakout hits like The Boys and the hugely increased viewership and awareness of The Expanse after it moved over to Amazon have shown it can now produce great shows with large audiences.

One question we’ve touched on before is whether the show will launch weekly or all at once. Given Amazon’s move to a weekly release schedule for many of their original shows, I think it’s probably more likely than not that Wheel of Time will hit the airwaves one episode at a time, possibly after the first two or three episodes are released at once. That will give The Wheel of Time more than a month of having people talking about a new episode every week, that will hopefully get people excited and willing to watch more.

Amazon has already, of course, started drip-feeding us some marketing already, with a short look at the Winespring Inn, a look at the show’s swords, a tease of an infamous dagger and a brief glimpse at Thom’s new musical instrument, as well as unveiling some impressive concept art. At the moment these sneak peeks are aimed more at book-readers than a general audience, but that will change.

I suspect a short teaser of some kind will be aired first, maybe 3-6 months out from airing, with a longer and more substantive trailer a few weeks out from transmission. These trailers will have to nail what makes The Wheel of Time different from other fantasy projects like Game of Thrones or The Witcher, or Amazon’s own upcoming Lord of the Rings show, so I’d suspect some display of the One Power in full force and a focus on Rosamund Pike’s star power as Moiraine (especially since early blurbs suggest the show will re-focus on Moiraine as a protagonist to keep the identity of the Dragon Reborn more in question than it is in the books).

What will be interesting is if some kind of supporting website is launched as well. The world of The Wheel of Time is complex, with fourteen distinct nations in the Westlands alone, numerous competing factions and a detailed backstory unfolding over almost 3,500 years. Existing references are heavy on spoilers for the books, so a TV-specific website with maps, histories and descriptions of factions like the Aes Sedai, Tuatha’an, Aiel and Children of the Light could be a great reference, especially if it’s only updated to the latest episode to avoid spoilers.

It’s also likely we’ll get some kind of aftershow to discuss the latest episode in detail with guest stars and comparisons to the books. There’s certainly plenty of Wheel of Time talent out there knowledgeable enough to make such a show engaging. There may also be featurettes and documentaries expanding on what happened behind the scenes on the making of the show.

There’s also merchandising to consider. We’ll likely see The Eye of the World at least – if not the entire series – reissued with a TV tie-in cover, and we already know that Valyrian Steel are working on replica swords based on the TV designs. We’ll also probably see the soundtrack released commercially. More detailed merchandising – statues, action figures, a pop-up guide book to Tar Valon, and, of course, the inevitable Narg’s Cooking Masterclass cookbook – may wait on people seeing how successful the first season has been.

One thing that is for sure is that when Amazon decide on a release date for the show, they’ll make sure as many people as possible know about it.

As usual, hit us up in the comments with your thoughts and keep an eye on the Wheel of Time TV News page here on Dragonmount.