A look at Robert Jordan's Notes

An examination of some of Robert Jordan's early notes on The Wheel of Time. 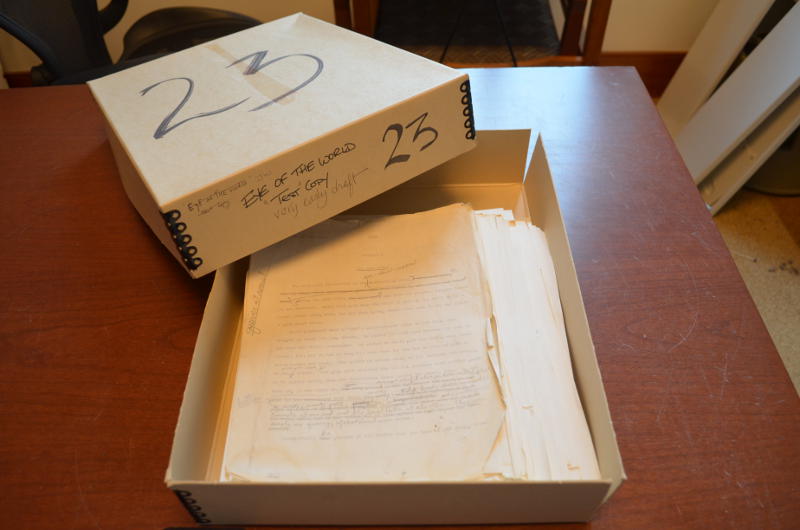 We all know that Brandon Sanderson completed The Wheel of Time based off of Robert Jordan's notes. We know that those notes were so extensive that Harriet McDougal, RJ's wife and editor, claimed there were easily more words in the notes than words in all the books.  Many of those notes, along with many original items from Robert Jordan's office were donated to The College of Charleston Special Collections department. An entire blog exists to showcase some of the items in that collection. From their website:

The collection includes early and edited manuscripts of the Wheel of Time series and manuscripts from his other works – including his work on the Conan the Barbarian series and the Michael Fallon novels about a fictional Lowcountry family during the American Revolution. The collection also includes swords and scabbards, video interviews, an early Apple computer loaded with 4,000 pages of his notes, and first editions of his works in dozens of languages.

Recently, our good friend Terez had the opportunity to explore these archives. In particular, she had the opportunity to read many of Robert Jordan's detailed notes and early outlines for the series.  While she's unable to share everything she saw (out of respect to the College, and to Harriet), she was able to give us a peek at several exciting things.  Here's what Terez had to say:

In 2012, Harriet donated RJ's papers to the Addlestone Library at the College of Charleston, where archivist Joshua Minor has since been processing the collection. Marie Curie and I have been planning a trip to the library for over a year, and we decided to make it happen after JordanCon this year. We started work yesterday, and there was much more interesting material than we expected, though I was told Maria Simons [Harriet's assistant] has yet to hand over many files, some of which are probably material intended for the Encyclopedia. With the exception of certain restricted files, the collection is publicly accessible, but the number of things appropriate to post online is limited according to copyright and Fair Use standards. I tweeted out a bad photograph the day before yesterday of the page below (Mss 0197, fox 4, folder 2), and I am told it has made the rounds, so Jason asked if I would post a clear copy here. It appears to be the first page of RJ's 6-book pitch to Tom Doherty--or perhaps the last stage of that pitch--along with another file in the same folder which is a more detailed, 2-part outline of The Eye of the World. Both documents were probably written no earlier than 1984, no later than 1988, and closer to the former. It is clear from other bits in the notes found in that same folder that RJ eventually opted to have Rand fight Ba'alzamon (believing he was the Dark One) rather than having him attempt to confront the Dark One directly in the beginning of the story, and fail.

Here's a look at that page from Robert Jordan's notes. (Click to enlarge) 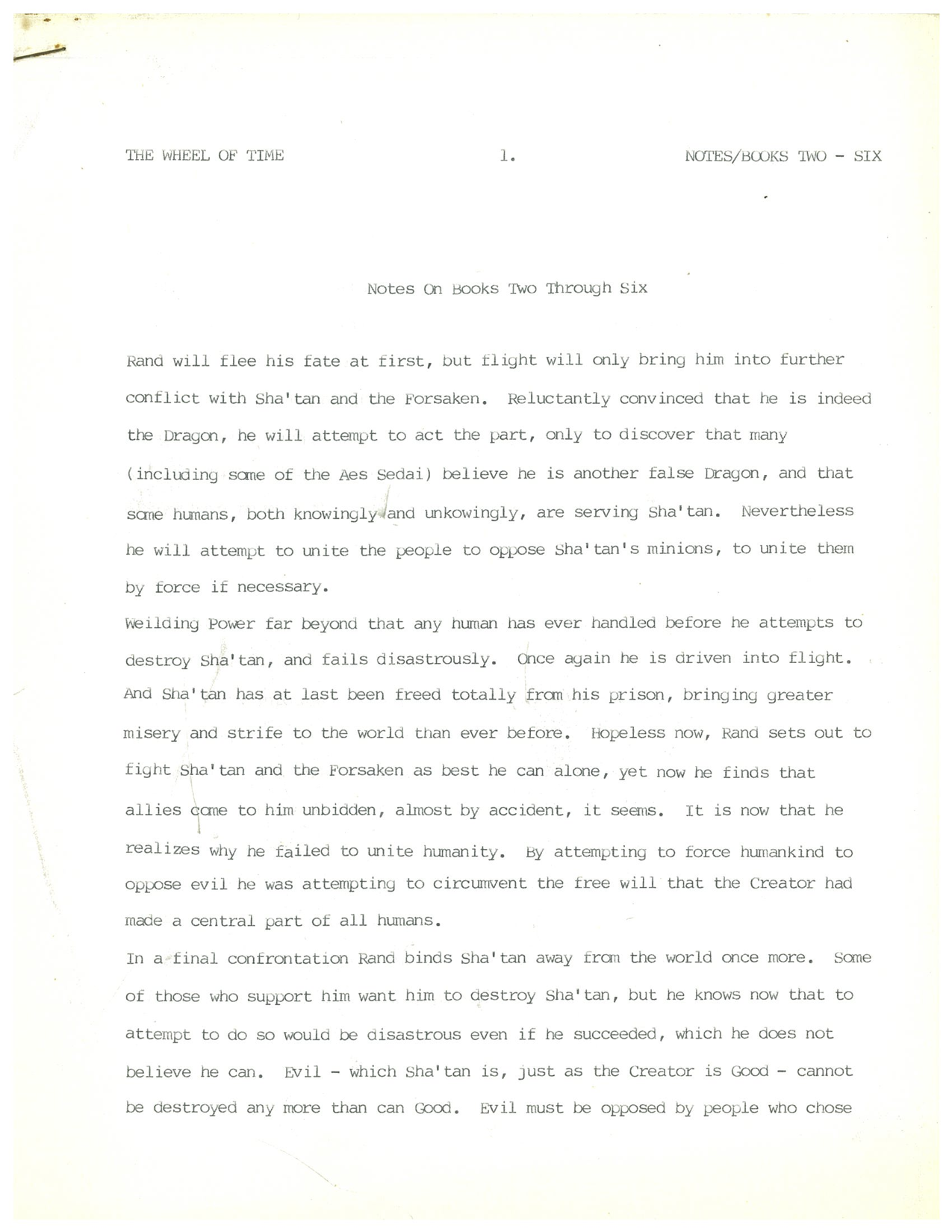 Here's the text from the page:

Rand will flee his fate at first, but flight will only bring him into further conflict with Sha’tan and the Forsaken. Reluctantly convinced that he is indeed the Dragon, he will attempt to act the part, only to discover that many (including the Aes Sedai) believe he is another false Dragon, and that some humans, both knowingly and unknowingly, are serving Sha’tan. Nevertheless he will attempt to unite the people to oppose Sha’tan’s minions, to unite them by force if necessary.
Wielding power far beyond that any human has ever handled before he attempts to destroy Sha’tan, and fails disastrously. Once again he is driven into flight. And Sha’Tan has at last been freed totally from his prison, bringing greater misery and strife to the world than ever before. Hopeless now, Rand sets out to fight Sha’tan and the Forsaken as best he can alone, yet now he finds that allies come to him unbidden, almost by accident, it seems. It is now that he realizes why he failed to unite humanity. By attempting to force humankind to oppose evil he was attempting to circumvent the free will that the Creator had made a central part of all humans.
In a final confrontation Rand binds Sha’tan away from the world once more. Some of those who support him want him to destroy Sha’tan, but he knows now that to attempt to do so would be disastrous even if he succeeded, which he does not believe he can. Evil – which Sha’tan is, just as the Creator is good – cannot be destroyed any more that can Good. Evil must be opposed by people who chose

The title of the document is "Notes on Books Two Through Six." As Terez mentions above, this document was written well before the publication of The Eye of The World. Back then, Robert Jordan had been given a six book deal from Tor, so this outline was his vision for the entire series at the time.  Note that the last paragraph closely resembles the ideas used by Brandon in the final books.

To read a little bit more about what Terez found at the archive, visit this link from Theoryland.

If we're able to post more photos or information like this, then we'll do so. In the meantime, tell us what you think, and be sure to visit the resources above.

A Wheel of Time Encyclopedia is currently being developed by Team Jordan. Much of the information from Robert Jordan's notes will be included in it. No release day has been announced, but the common expectation is that it will be completed this year, and possibly be released in early 2015. Dragonmount will have more information as it becomes available.