Season 1 of Amazon Prime's Wheel of Time television show wrapped this week, and Season 2 was greenlit. 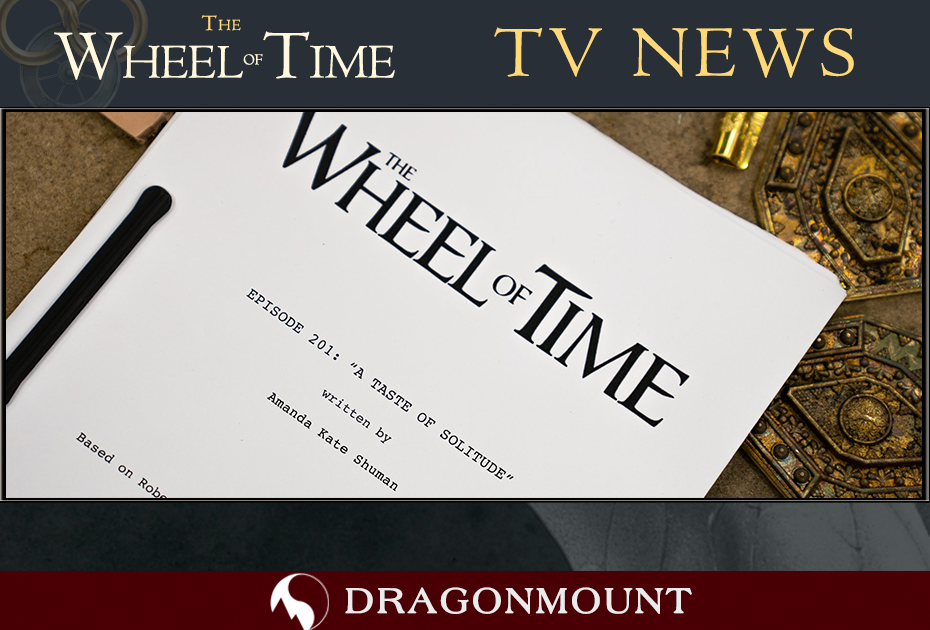 The news broke yesterday that Amazon Prime officially renewed The Wheel of Time for a second season!

Rafe Judkins, the showrunner, hinted that the writing staff had already begun writing scripts for season two some time ago, but the confirmation was appreciated.

The filming of season one wrapped as well, and there’s speculation the release date may be sometime in the fall of this year.

Amidst all the celebration, Rafe Judkins hosted a Q&A session on Instagram.  You can read the questions and his responses below: 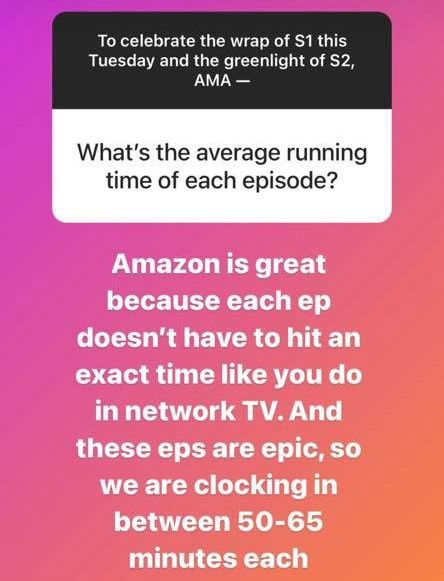 Q: What’s the average running time of each episode?

A: Amazon is great because each ep doesn’t have to hit an exact time like you do in network TV. And these eps are epic, so we are clocking in between 50-65 minutes each. 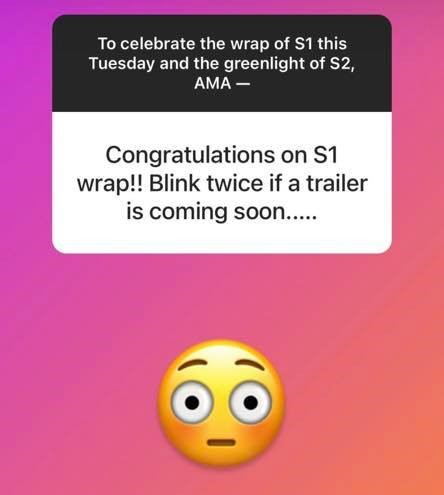 Q: Congratulations on S1 wrap!! Blink twice if a trailer is coming soon…..

A: (A blushing, wide eyed emoji) 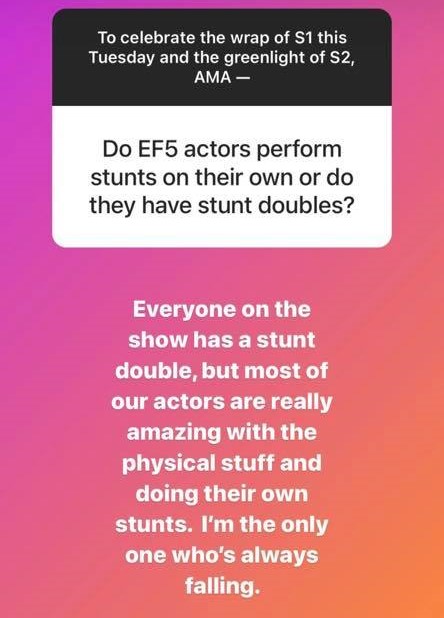 Q: Do EF5 actors perform stunts on their own or do they have stunt doubles?

A: Everyone on the show has a stunt double, but most of our actors are really amazing with the physical stuff and doing their own stunts. I’m the only one who’s always falling. 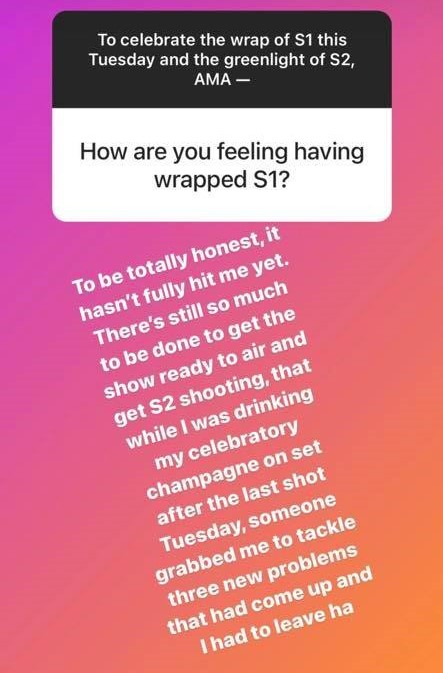 Q: How are you feeling having wrapped S1?

A: To be totally honest, it hasn’t fully him me yet.  There’s still so much to be done to get the show ready to air and get S2 shooting, that while I was drinking my celebratory champagne on set after the last shot Tuesday, someone grabbed me to tackle three new problems that had come up and I had to leave ha 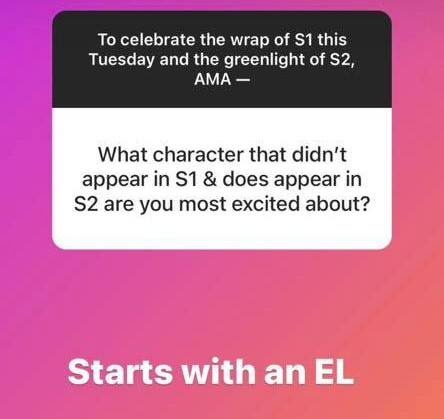 Q: What character that doesn’t appear in S1 & does appear in S2 are you most excited about?

A: Starts with an EL 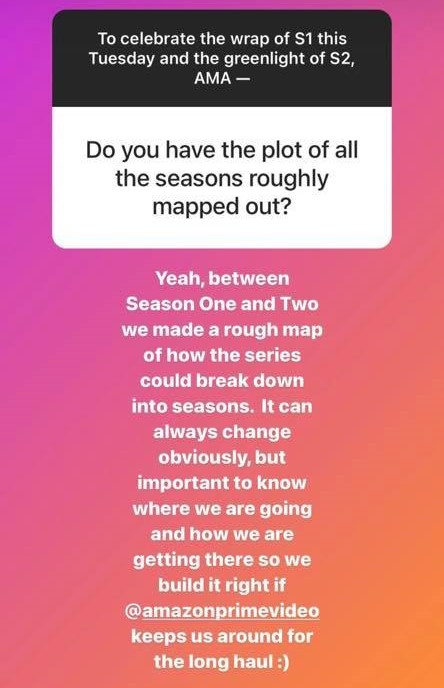 Q: Do you have the plot of all the seasons roughly mapped out?

A: Yeah, between Season One and Two we made a rough map of how the series could break down into seasons. It can always change obviously, but important to know where we are going and how we are getting there so we build it right if @amazonprimevideo keeps us around for the long haul 🙂 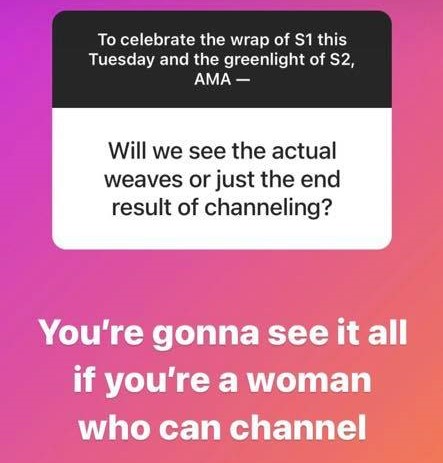 Q: Will we see the actual weaves of just the end result of channeling?

A: You’re going to see if all if you’re a woman who can channel 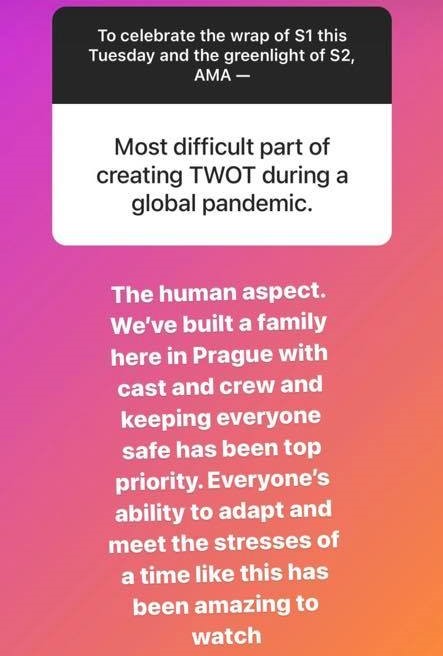 Q: Most difficult part of creating TWOT during a global pandemic.

A: The human aspect. We’ve built a family here in Prague with cast and crew and keeping everyone safe has been top priority. Everyone’s ability to adapt and meet the stresses of a time like this has been amazing to watch. 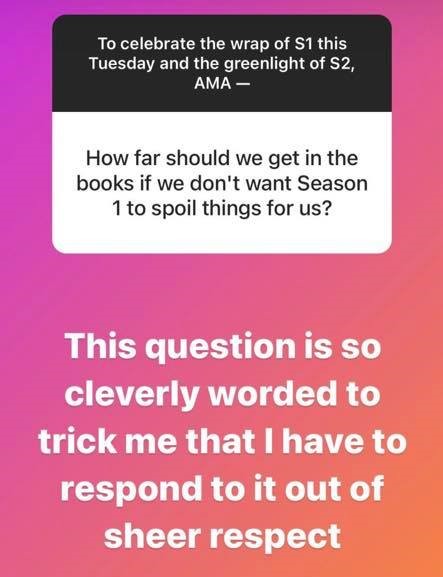 Q: How far should we get into the books if we don’t want Season 1 to spoil things for us?

A: This question is so cleverly worded to trick me that I have to respond to it out of sheer respect 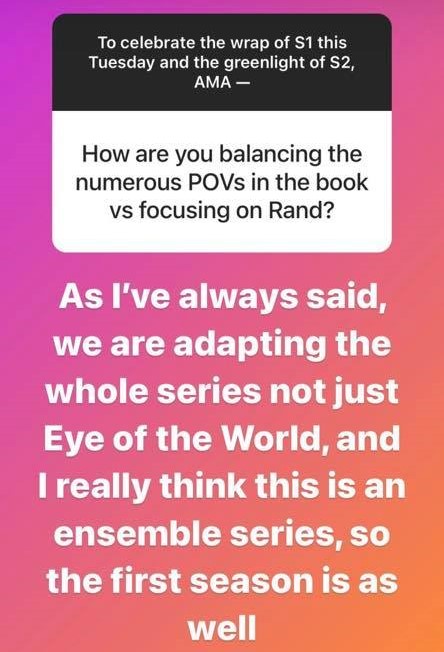 Q: How are you balancing the numerous POVs in the book vs focusing on Rand?

A: I’ve always said, we are adapting the whole series not just Eye of the World, and I really think this is an ensemble series, so the first season is as well 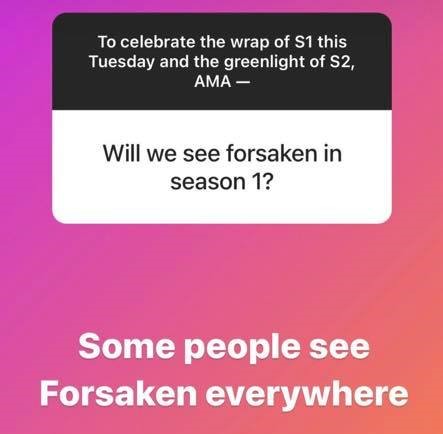 Q: Will we see forsaken in season 1?

A: Some people see Forsaken everywhere 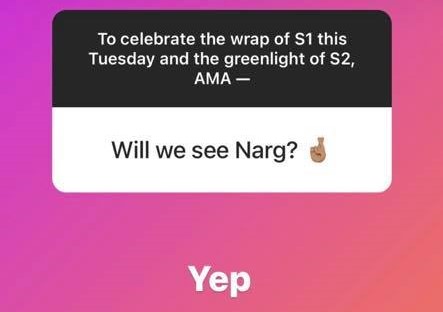 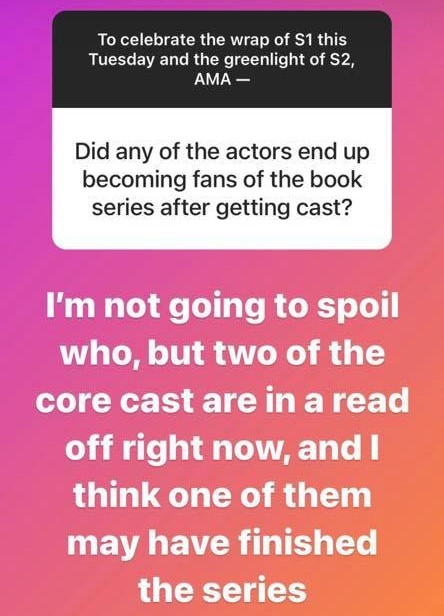 Q: Did any of the actors end up becoming fans of the book series after getting cast?

A: I’m not going to spoil who, but two of the core cast are in a read off right now, and I think one of them may have finished the series 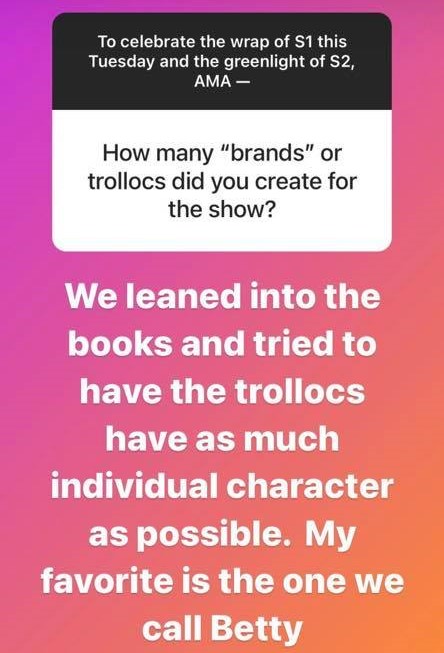 Q: How many “brands” or trollocs did you create for the show?

A: We leaned into the books and tried to have the trollocs have as much individual character as possible. My favorite is the one we call Betty 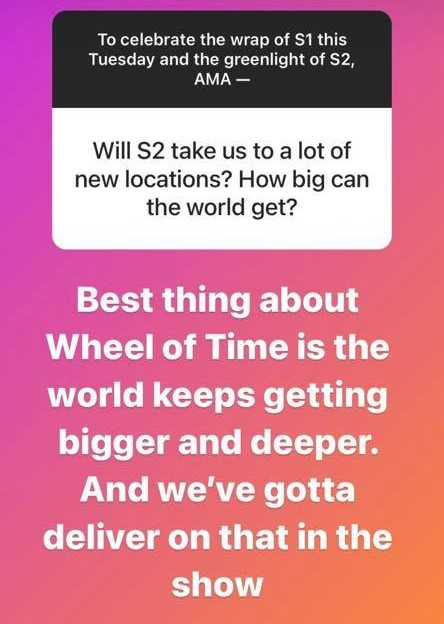 Q: Will S2 take us to a lot of new locations? How big can the world get?

A: Best thing about Wheel of Time is the world keeps getting bigger and deeper. And we’ve gotta deliver on that in the show 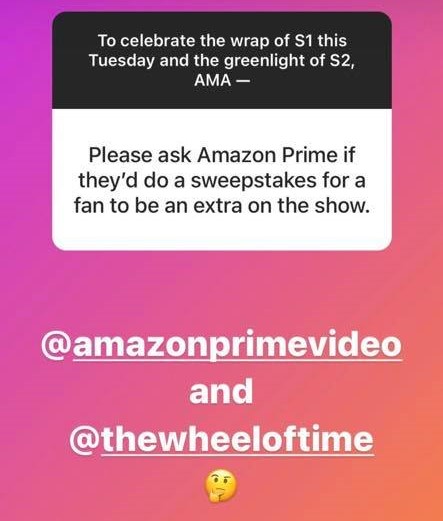 Q: Please ask Amazon Prime if they’d do a sweepstakes for a fan to be an extra on the show. 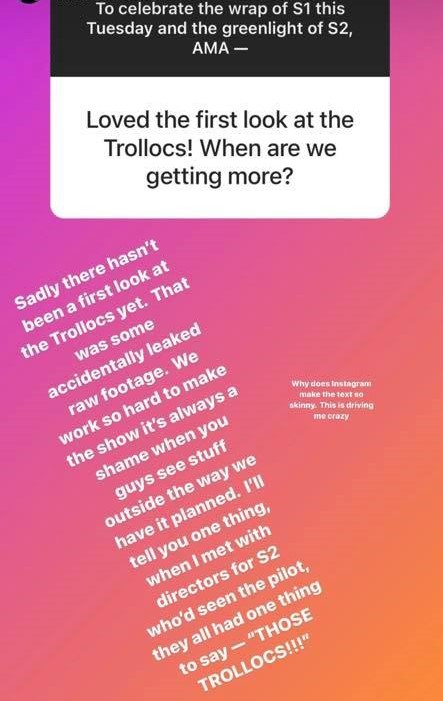 Q: Loved the first look at the Trollocs! When are we getting more?

A: Sadly there hasn’t been a first look at the Trollocs yet.  That was some accidently leaked raw footage. We work so hard to make the show it’s always a shame when you guys see stuff outside the way we have it planned. I’ll tell you one thing, when I met with directors for S2 who’d seen the pilot, they all had one thing to say – “THOSE TROLLOCS???”

(Small text to the side: Why does Instagram make the text so skinny. This is driving me crazy) 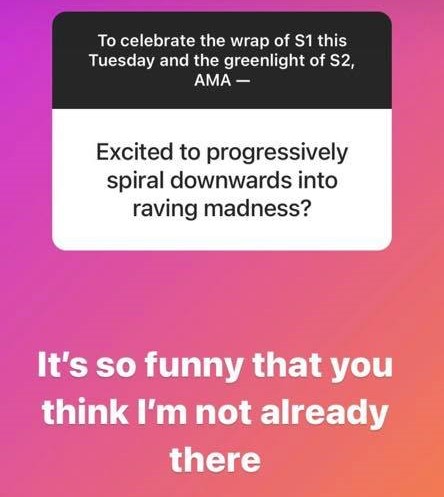 A: It’s so funny that you think I’m not already there 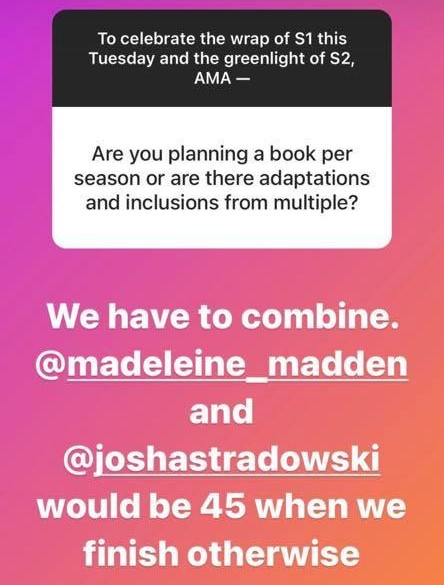 Q: Are you planning a book per season or are there adaptations and inclusion from multiple?

A: We have to combine. @madeleine_madden and @joshastradowski would be 45 when we finished otherwise. Q: Will Lan’s cook cloak be featured in the show?

A: I love Lan’s cloak in the show. But much like Aes Sedai agelessness, if  it’s an effect that’s going to cost a fortune every time a character is on screen, it’s a bad use of our money. Unless you want to see all of S1 in the Winespring Inn.  Then you can have color changing cloaks  🙂 Q: Who has been the hardest character to write for so far?

A: Perrin is the hardest. His interior monologue in the books is the biggest part of his character, so bringing him out in the show is always something we have to build really consciously. Luckily @marcus_rudda just exudes Perrin every minute so it makes our lives a lot easier

(text at the bottom: And thank you @sarahenakamura for teaching me about the text slider. Just in time for the last question) 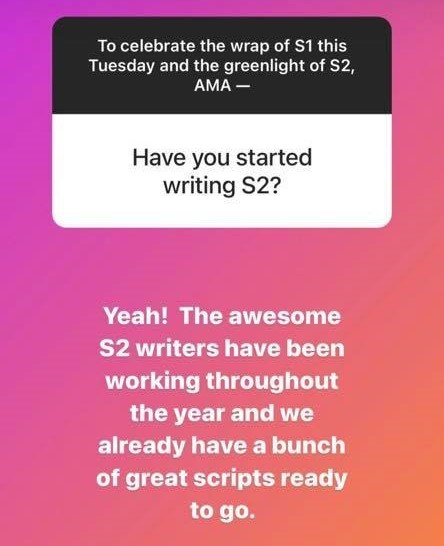 Q: Have you started writing S2?

A: Yeah! The awesome S2 writers have been working throughout the year and we already have a bunch of great scripts ready to go.