Barney Harris has left the role of Mat Cauthon following the sixth episode of The Wheel of Time. How was the transition handled? 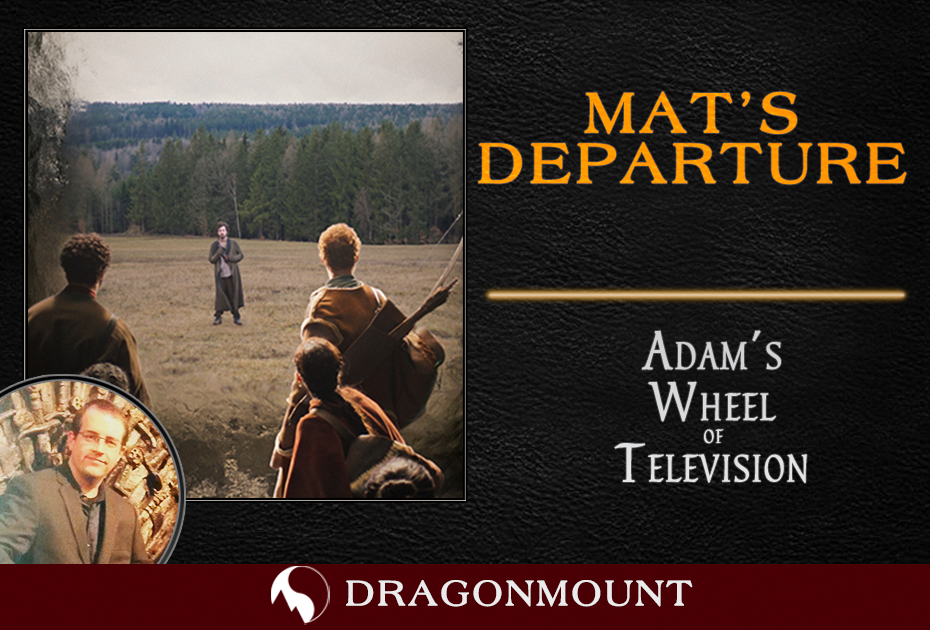 As discussed previously, it’s been known for some time that the role of Mat Cauthon had been recast for the Wheel of Time TV show. Actor Barney Harris played the role in six episodes of the first season before departing, and actor Dónal Finn has been hired to replace him for the second season.

The reasons for Barney’s departure have not been given, and given that NDAs and legal agreements are presumably in place, are not likely to be revealed in the near future. As such, we should note in discussing this topic that no negative connotations to the situation should be implied. What is interesting is how the show had to adapt on the fly to the news.

To recap, the first season of The Wheel of Time started shooting on 19 November 2019. On 15 March 2020, production of the first season was halted during the initial stages of the COVID19 pandemic. Fortuitously, 15 March was the Sunday at the end of the third block of shooting, with filming concluded for the bulk of Episodes 1-6. The only material missing from these episodes was pickup shots in Spain, for the scenes of Logain in Ghealdan at the start of Episode 4. This allowed the post-production team to put together edits of the first six episodes and for the vfx team to get to work on them.

Filming resumed on the final block of shooting, comprising Episodes 7 and 8, in early September 2020. Most of the material for those two episodes was shot before filming was suspended a second time in early November 2020, due to a huge outbreak of coronavirus in the Czech Republic. The pickup shots in Spain were able to go ahead, as Spain was handling the pandemic better at that point in time. Shooting for the outstanding material resumed in April 2021 and wrapped on or around Friday 14 May 2021. Filming on Season 2 began two months later, on 19 July. Amazon confirmed the recasting of Mat on 21 September.

Based on what happened in Episode 6, The Flame of Tar Valon, it now appears that Barney Harris did not return to the role of Mat Cauthon after the initial COVID outbreak and resulting shutdown in March-September 2020. This left the production in a somewhat awkward place, as they did not want to necessarily recast Mat immediately (going from one actor playing Mat in Episodes 1-6 and a different one in Episodes 7-8 would be jarring, at best) but they had to find a way of removing Mat from the narrative in a way that made sense and did not involve any new filming with Harris, who presumably was not available at all.

I strongly suspect that in the initial shoot, Mat entered the Ways with the rest of the characters and the episode ended perhaps on a foreboding note with the Waygate closing behind them. This left the writers with a difficult job of trying to explain Mat’s absence. Opening Episode 7, The Dark Along the Ways, ten minutes later with the characters saying, “I can’t believe we somehow lost Mat. Weird, huh? Anyway, let’s move on,” was clearly unappealing, and the cost of producing a CG replica of Barney Harris to walk along with the team before being written out was likely regarded as massively cost-prohibitive, not to mention weird.

The best option, or at least the best of a poor choice of options, was to remove Mat using the footage they already had in the can, and the fact that although they could not shoot new Mat material, they could shoot new reaction shots from the other actors.

Amazon, it turns out, had form for this kind of on-the-fly adaptation. Cas Anvar played the character of Alex Kamal on the first five seasons of The Expanse, but after work on Season 5 was completed but before it aired, allegations of improper conduct surfaced against Anvar (we note, again, that no information has been given about why Harris was replaced and it should not be suggested this was down to any kind of improper behaviour to our knowledge). Anvar was removed from the cast and the production team were left with how to handle this in the edit. The solution they chose was that ace pilot Alex should die from a brain haemorrhage brought about by high-gravity spacecraft manoeuvres, an ongoing and frequently-mentioned risk in the setting. Fortunately, this was even discussed in material filmed for the Season 5 finale, which they could re-emphasise in the edit. They had Alex die off-camera between shots, and then froze a shot of Alex in the cockpit, making it look like he’d expired, and added some CG blood floating in the air to sell the illusion.

Also fortunately, the team were shooting the start of Season 6 a week before Season 5 aired. This allowed them to re-shoot material from the end of the Season 5 finale to reflect on the character’s death. The only major technical obstacle was that Alex was present at a reception scene following his character’s newly-created death, which required the CG team to paint him out of every shot after the editors re-edited the sequence to use angles and shots avoiding his presence wherever possible. Although slightly awkward, the edit was broadly successful.

For The Wheel of Time, a similar process seems to have been followed. The original material for the episode included lines of Mat being reluctant to enter the Ways, presumably just as character banter before being encouraged to join the rest of the team. By focusing on this line more than was originally intended, the editors could make it appear that this was Mat genuinely feeling unable to carry on with the mission. The shots of the other characters entering the Ways and then reacting to Mat staying behind were likely re-filmed when shooting on Episode 7 resumed, and dropped into the end of Episode 6. Different shots of Mat outside the Ways were then used and dropped into the back of the shot to show him staying back as everyone else entered the Waygate.

It is, unavoidably, an awkward change to Mat’s story, although it is helped by the fact that Mat is not thinking clearly due to his association with the cursed dagger from Shadar Logoth. How well the recasting is handled will depend on the other characters' reactions to Mat’s departure in the next two episodes, and how his return in early Season 2 is handled. It is a good reminder that shooting a TV show is an uncertain business, and creatively responding to unforeseen events is a key part of the job of the production team.

EDIT: I've seen unpleasant rumours spreading that Barney Harris did not return to the project due to allegedly not being in favour of COVID vaccinations, which were required for filming to resume. This story is false and malicious. Production on The Wheel of Time resumed in September 2020, three months before the first COVID vaccines were available in the UK and EU and more like seven or eight months before they were readily available to people in their 20s. To our knowledge, Harris did not return to the shoot in September 2020 when the vaccines were still unavailable and nobody was vaccinated. Whatever his reason for not returning, it was completely unrelated to vaccinations.

As usual, please continue to follow developments on our casting and news pages and the forum and stay tuned for more info as we get it.