The teaser trailer for Amazon Prime’s adaptation of The Wheel of Time is full of hints about what has changed from the books. (SPOILERS for events in the entire book series.) 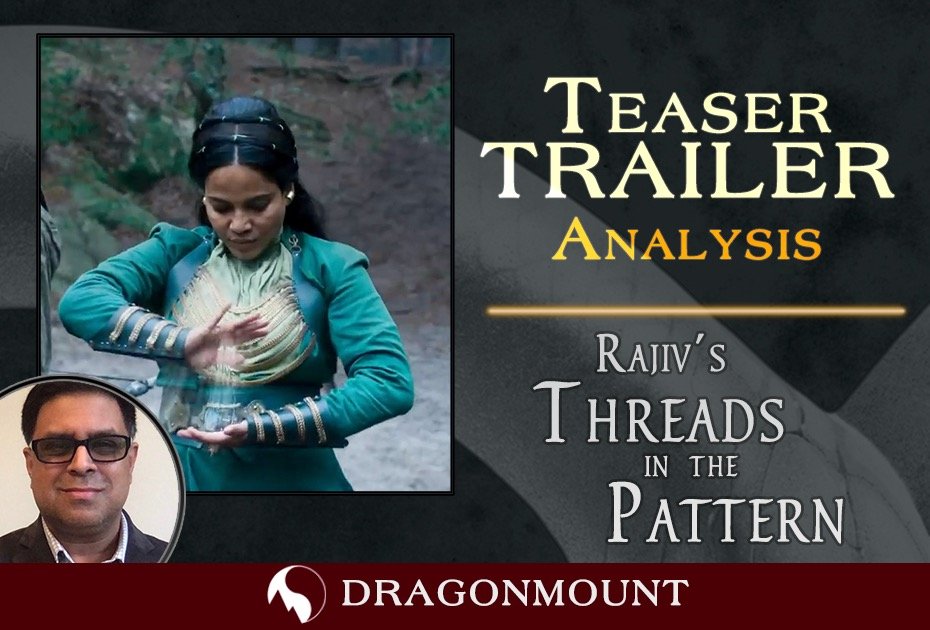 Amazon Prime released the much anticipated teaser trailer for its series based on The Wheel of Time, and watching it (with the Dragonmount crew!) was joyful and cathartic. And, of course, we watched it on repeat, frame by frame, to see what had changed and what had stayed the same in the adaptation to the screen. A great deal has changed. While the set locations are familiar as old boots, the trailer features many scenes that were never in the pages of The Eye of the World.

The Wisdoms of Emond’s Field

In the books, the women who dispensed herbal cures and “listened to the wind” to predict the weather were called Wisdoms. The cures and predictions of the best Wisdoms work uncannily well because, unknown to even them, they’ve figured out a rough, unconscious way to channel the One Power. In the adaptation, Nynaeve the Wisdom shoves her apprentice Egwene into a river (0:02), and we see Egwene calmly floating (0:33). This looks like a visceral (and visual) representation of the Aes Sedai exercise to channel the Power: imagine it as a river, but if you fight it, it becomes rapid and wild. Surrender, and you can control it. Egwene is learning to ride the currents of saidar, the female half of the One Power. This has further implications. In the books, Nynaeve blocked herself from channeling unless she was angry out of fear of the One Power, which was taboo. She eventually breaks through her block when she sinks with a damaged boat, and is forced at last to surrender to saidar. This mirrors the initiation she provides Egwene here. Nynaeve finds her power in going back to her roots.

In the books, the false Dragon (a man who can channel the cursed male half of the One Power, doomed to go insane, who declares himself the world’s savior) Logain is captured by Aes Sedai out of scene. We only hear about it, and see him from a distance in a cage. In the adaptation, we see him, perhaps with his followers, fighting against the Aes Sedai trying to capture him and their Warders (0:49, 1:19, 1:31). Showing the taking of Logain is a good way to demonstrate to viewers the danger of a man who channels. It remains to be seen if we’ll see the disaster that Lews Therin wrought in the book’s prologue (maybe they’ll just insert Winter Dragon?), but if they save the Lews Therin flashback for later, the taking of Logain would be a good thematic prologue for the show.

The Aes Sedai and the White Tower

The White Tower and Aes Sedai other than Moiraine and Elaida don’t appear in The Eye of the World. But they feature prominently in this trailer. If, as the interviews suggest, the adaptation centers Moiraine, then we are probably looking at the Aes Sedai deliberating about how to solve the problem of false Dragons (0:46, 1:24), and some are also wondering about the real Dragon.

The Attack on Emond’s Field

In the book, we only see the aftermath of the attack on Emond’s Field. The in-scene action is at the al’Thor farm. The adaptation appears to center the action in Emond’s Field, and it looks like Rand is there too. We may lose the iconic scenes of Tam retrieving his sword, the Trollocs breaking down the door, and Narg the Talking Trolloc--not to mention Tam’s revelations in the Westwood. But the story will move faster if everyone is together, and we’ll actually get to see Moiraine and Lan mop up the Trollocs. 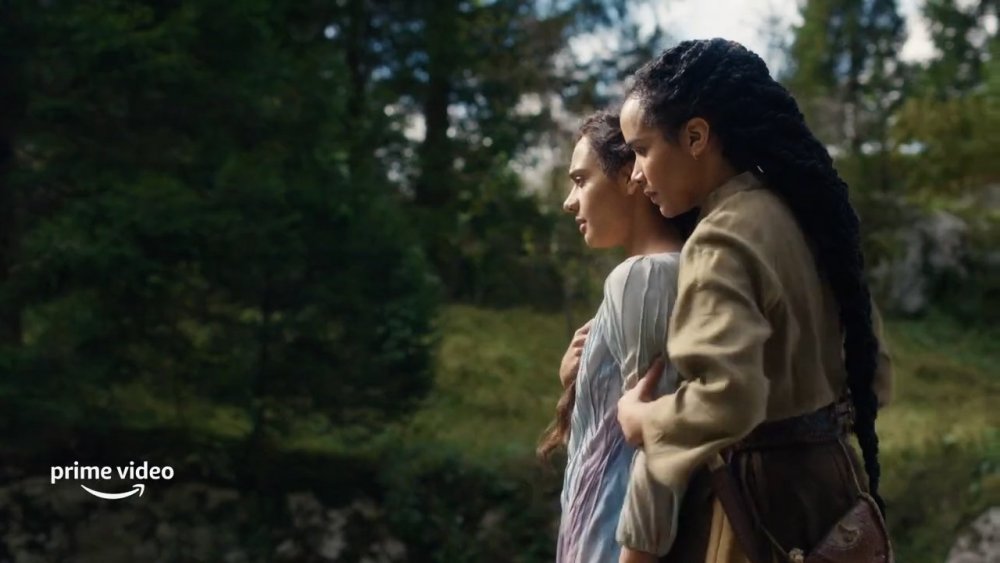 This is new, and a striking way to introduce us to the show. It’s familiar but different--a sign of what’s to come. The Wisdoms of Emond's Field are no strangers to using the One Power. 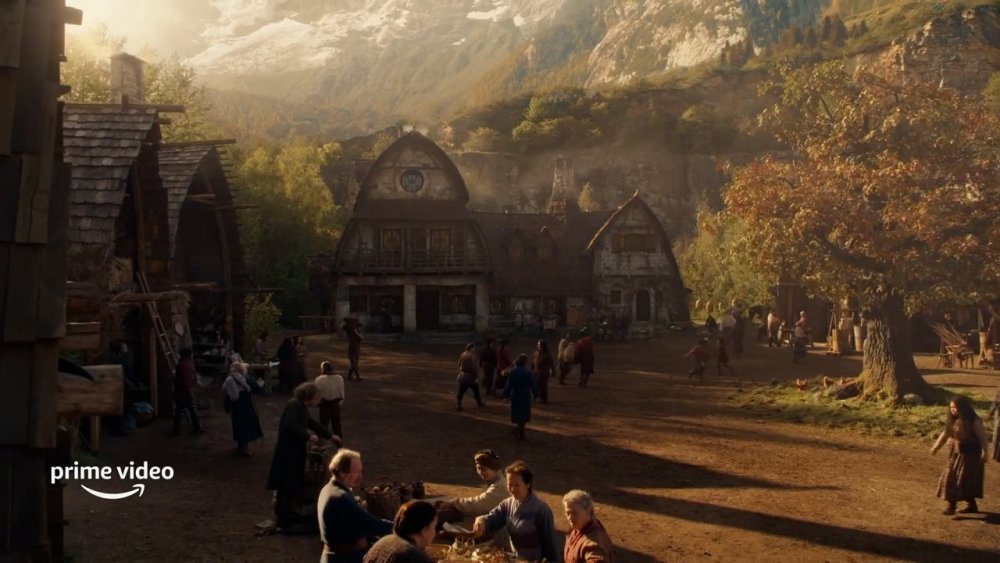 With the exception of the tiled roofs (poor Cenn Buie!) and the lack of stone foundation around that big tree, Emond’s Field is much as I imagined it. The three ta’veren lads seem to be enjoying themselves at the Winespring Inn rather than shirking their chores, but the adaptation has aged them up. The colors are warm, people are smiling, and the atmosphere is cozy. A good status quo to be shattered by the Trolloc attack. 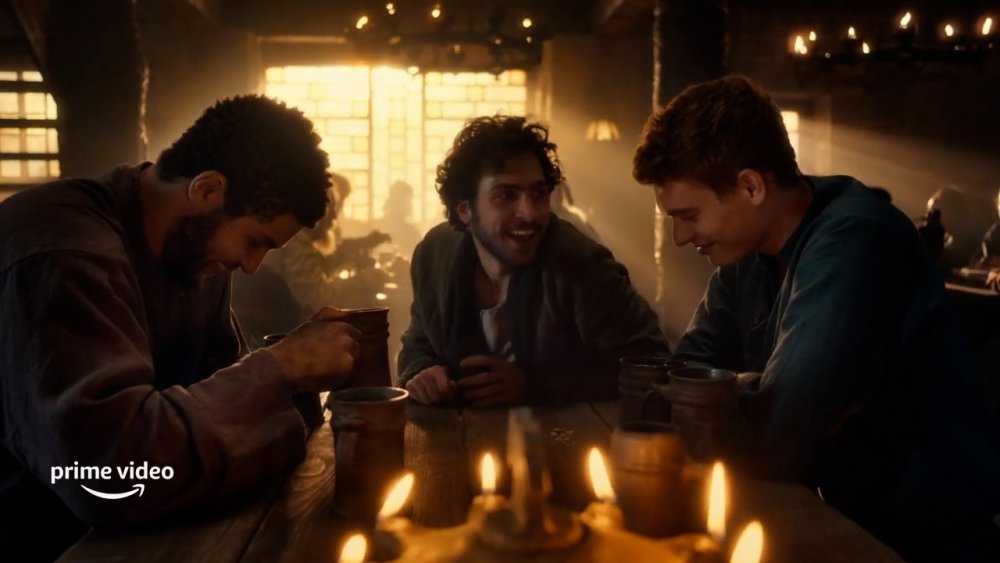 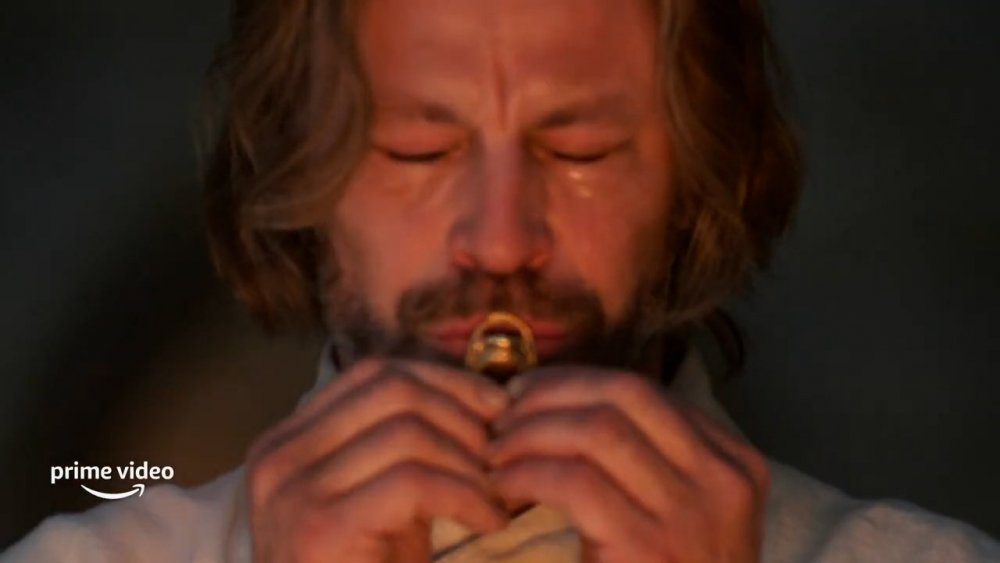 The man crying over a Great Serpent ring is most likely a Warder grieving for his Aes Sedai. We see this man in other scenes, wielding a pair of axes, standing with a pair of Green Aes Sedai and other Warders against a volley of arrows, and leaping to attack someone who is channeling. This is most likely the taking of the false Dragon, and it suggests their effort will carry a terrible cost.

0:20 Egwene rises in a pool of colored stripes 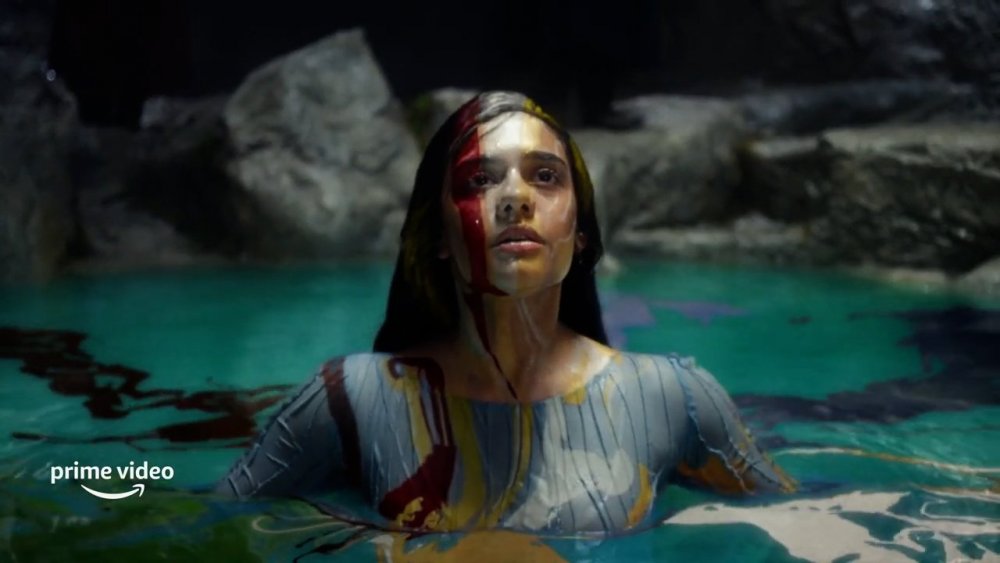 The colored stripes that cover Egwene as she rises from the pool clearly point to her fated rise to the Amyrlin Seat. But here, are we seeing Egwene’s prophetic Dream (perhaps as she floats down the river), or Min’s prophetic Viewing? 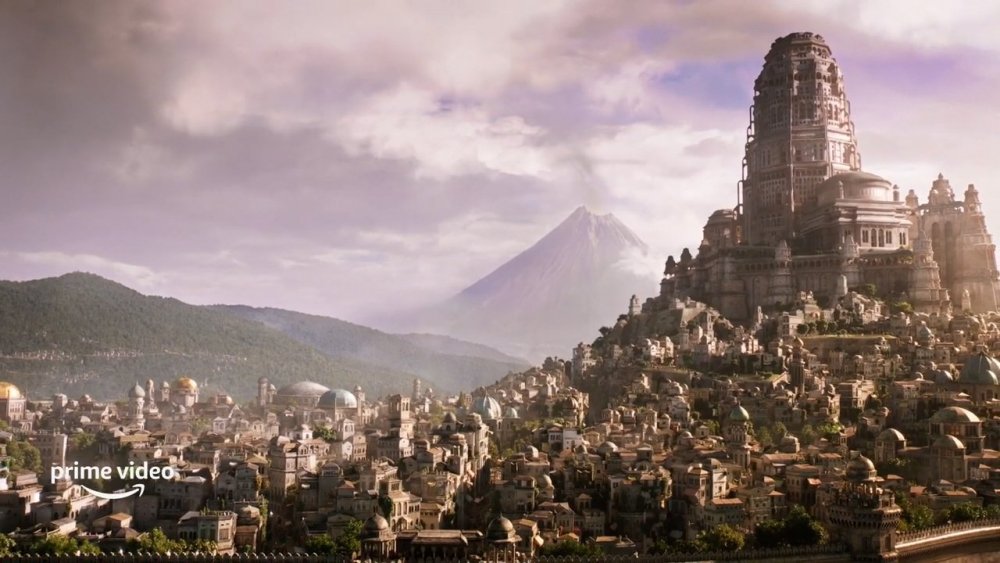 The city of Tar Valon, with Dragonmount in the background, is breathtaking, even if it seems Jeff Bezos’s rocket engineers designed the White Tower. Moiraine makes an entrance, pushing open the doors like Aragorn. 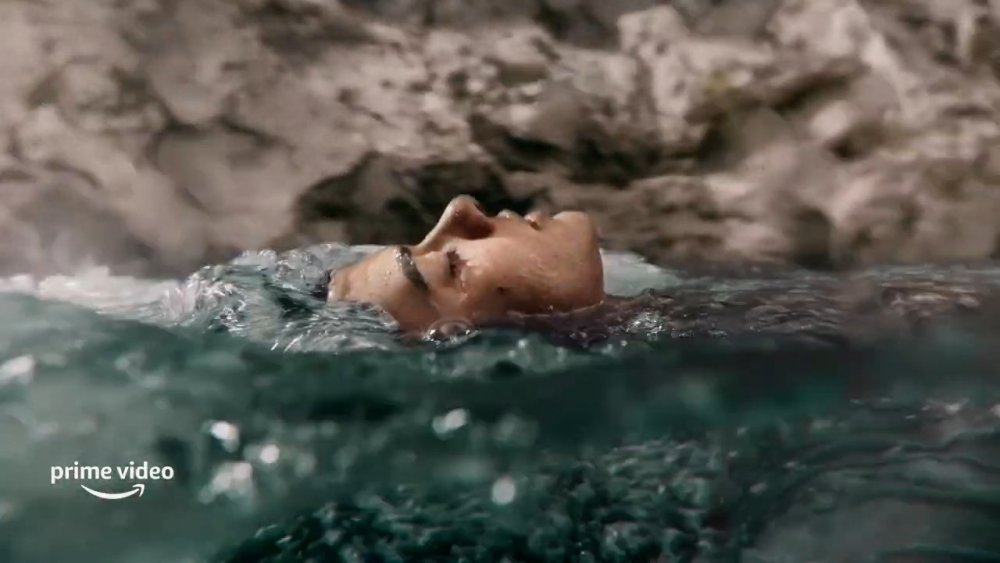 We revisit Egwene’s trip down the river with Moiraine’s voiceover saying that “all over the world there are different names for [the One Power].” This reinforces the idea that Wisdoms are aware, to some degree, that they are channeling saidar, and this initiation is to teach Egwene how to control it. 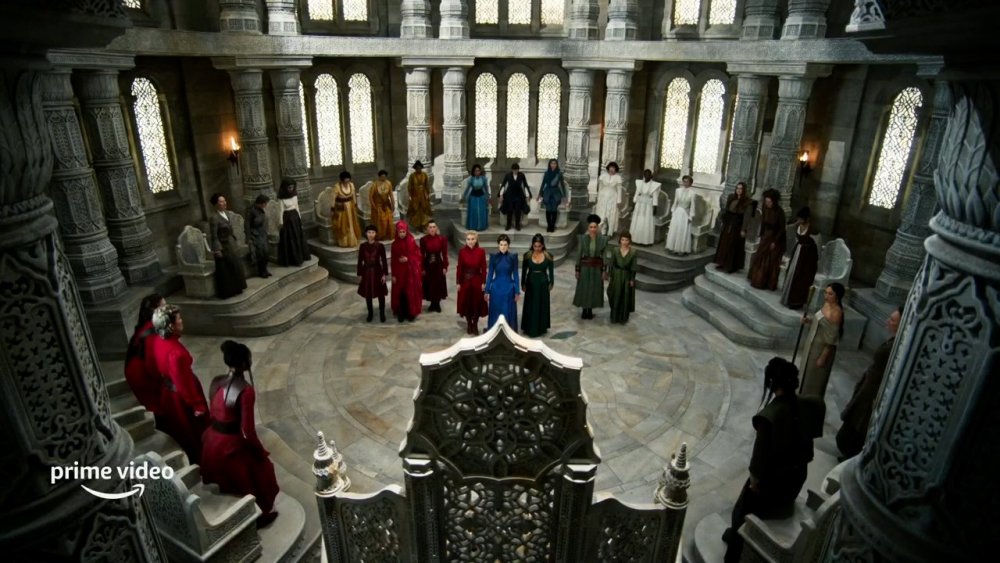 I always pictured the Hall of the Tower to be longer, but to accommodate the Ajah Sitters and the Amyrlin Seat, it’s as big as it needs to be. Its presence in this first season suggests that we’ll be privy to the White Tower’s deliberations over Dragons, false and true, and the fact that Kerene Nagashi is among them indicates that the 20 year secret search for the Dragon Reborn may be condensed into this season’s plot. 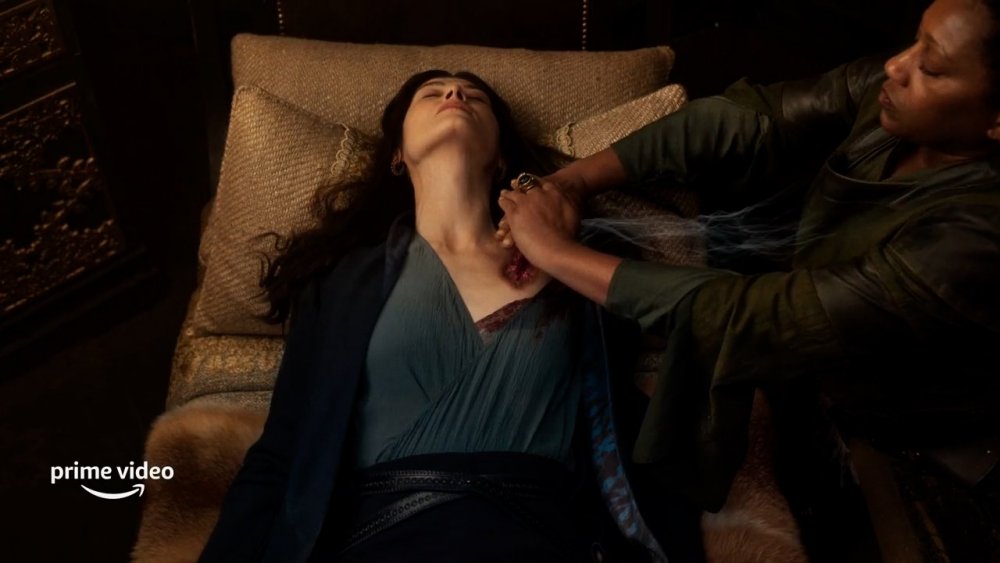 Is Kerene Nagashi Healing Moiraine? And if so, is this during the taking of Logain (which didn’t involve Moiraine in the books) or the attack on Emond’s Field (which, in the books, did not involve any other Aes Sedai than Moiraine)? If Kerene makes it to Emond’s Field, that changes the tone significantly--she’d be the senior member of the secret contingent tasked with the Dragon Reborn. 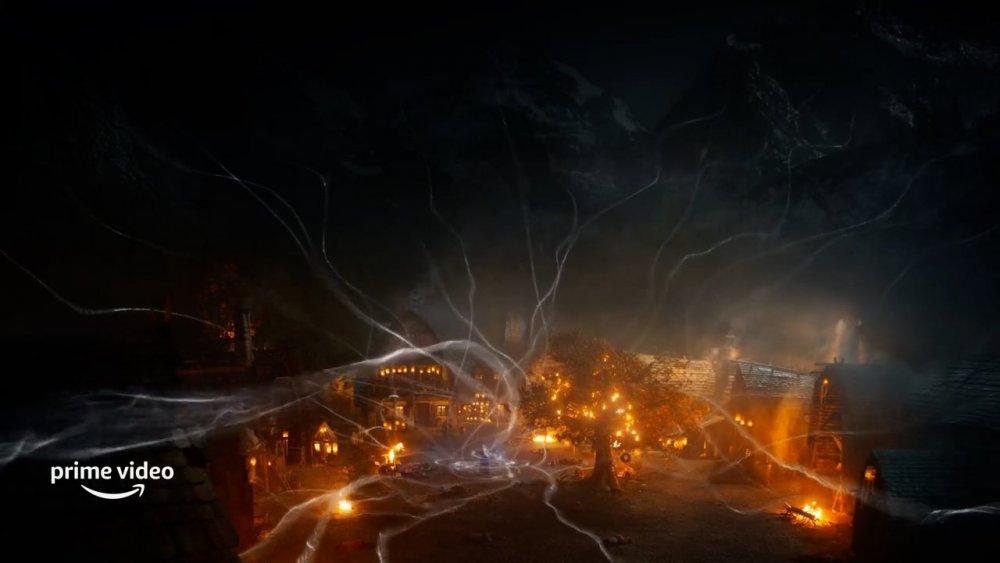 Look at that! The One Power being wielded over Emond’s Field, where the buildings are burning. The Eye of the World only showed us the aftermath of the Trolloc attack; but the adaptation will show us the action. Elaida was the only Red Ajah sister in The Eye of the World, but these stern-faced Aes Sedai look ready for business. That business is probably the false Dragon, Logain. 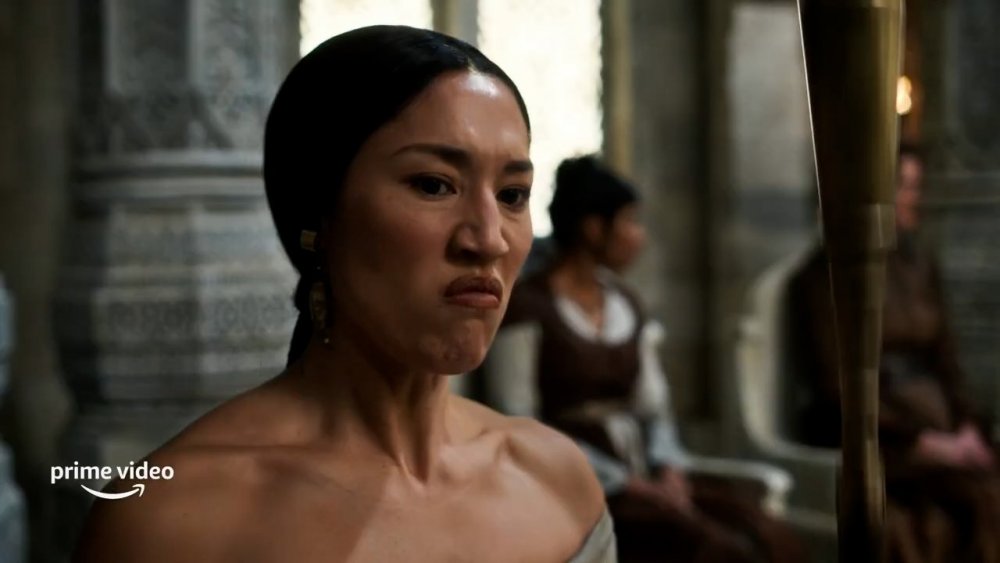 Leane Sharif angrily pounds her Keeper’s staff, calling for order. There is clearly a disagreement in the Hall of the Tower, and given what we’ve seen, it likely involves how to deal with Dragons, False or otherwise. In the books, the Reds tend to act as judge, jury, and executioner, but Siuan knows that if they accidentally sever the real Dragon Reborn from the True Source, the world could be doomed.

0:49 Aes Sedai and Warders do battle 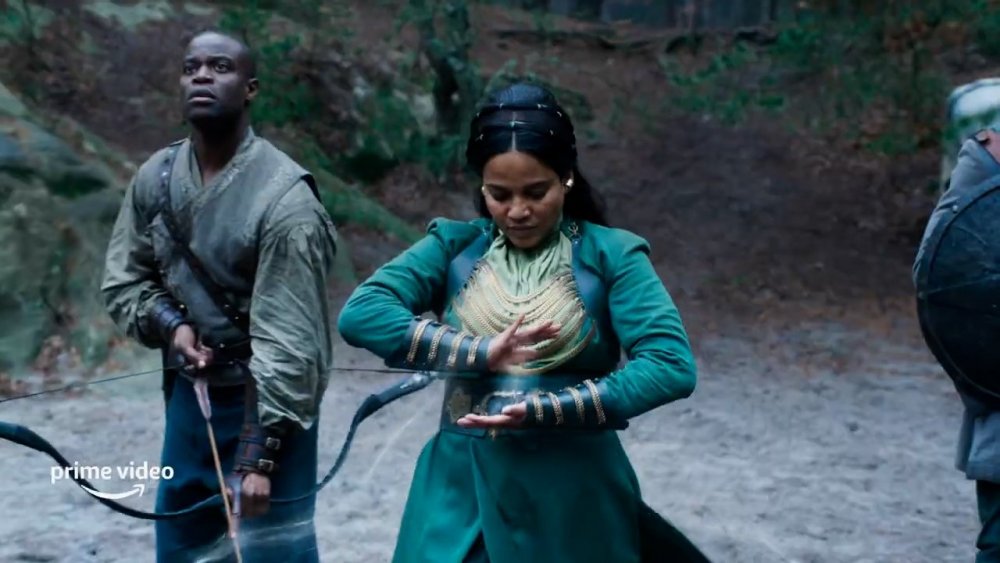 A pair of Green Ajah sisters (including Alanna Mosvani) and their Warders defend against arrows from an unseen opponent. The Trolloc attack in the Two Rivers happens at night, so this looks like the fight against Logain and his followers. 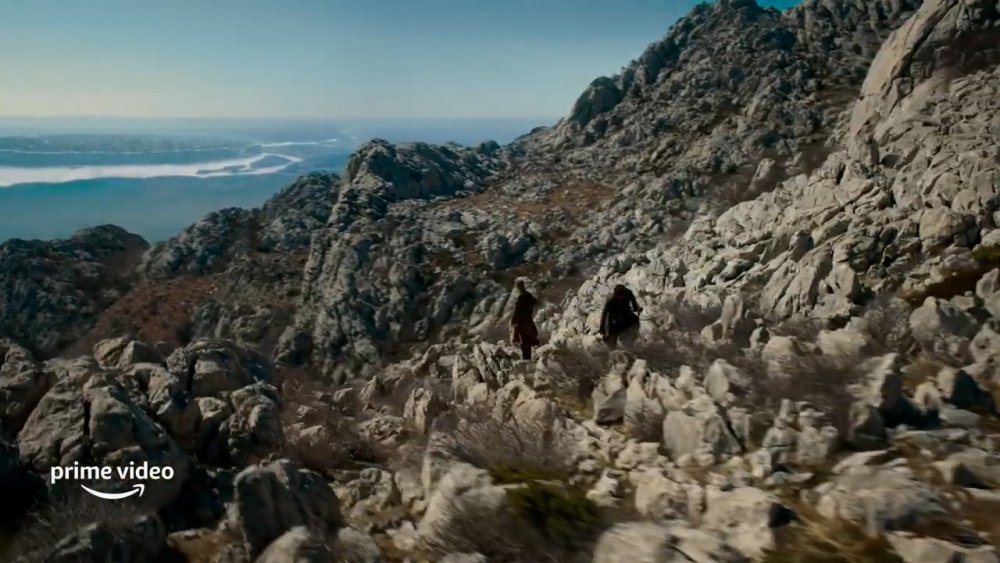 While these rocky hills look like where I imagined Perrin, Egwene, and Elyas hid from the Whitecloaks, Tar Valon is visible in the distance. It’s a different location. This is probably the slopes of Dragonmount, though not a flashback to the birth of the Dragon Reborn, since there’s no snow on the ground. 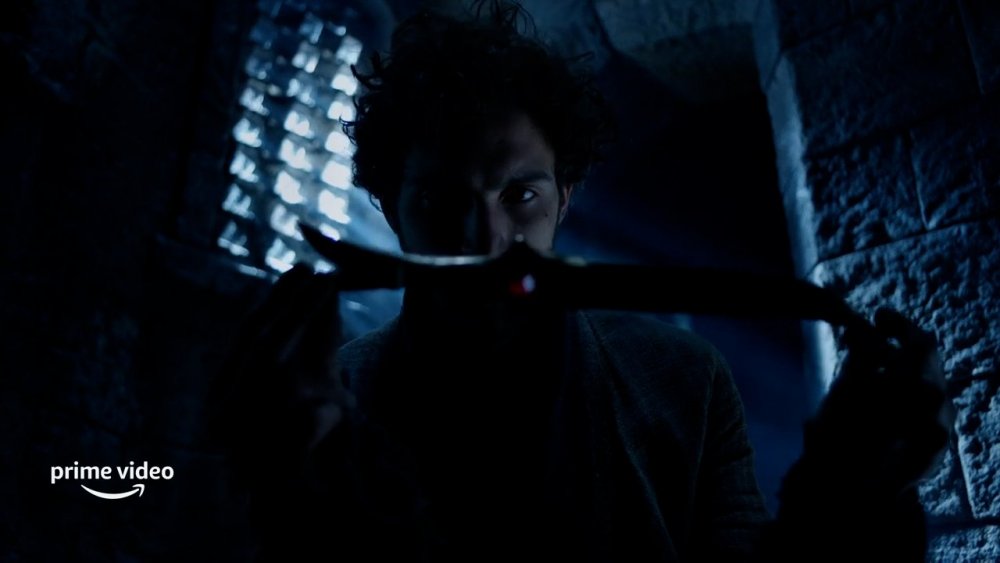 Shadar Logoth is recognizable and creepy. 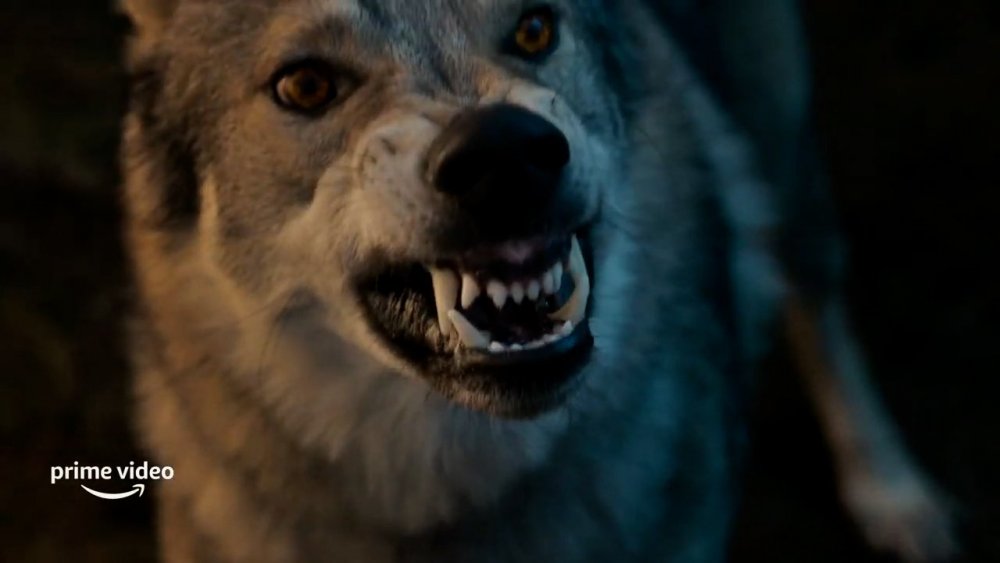 I’m glad the adaptation didn’t go with the Bearbrother idea. 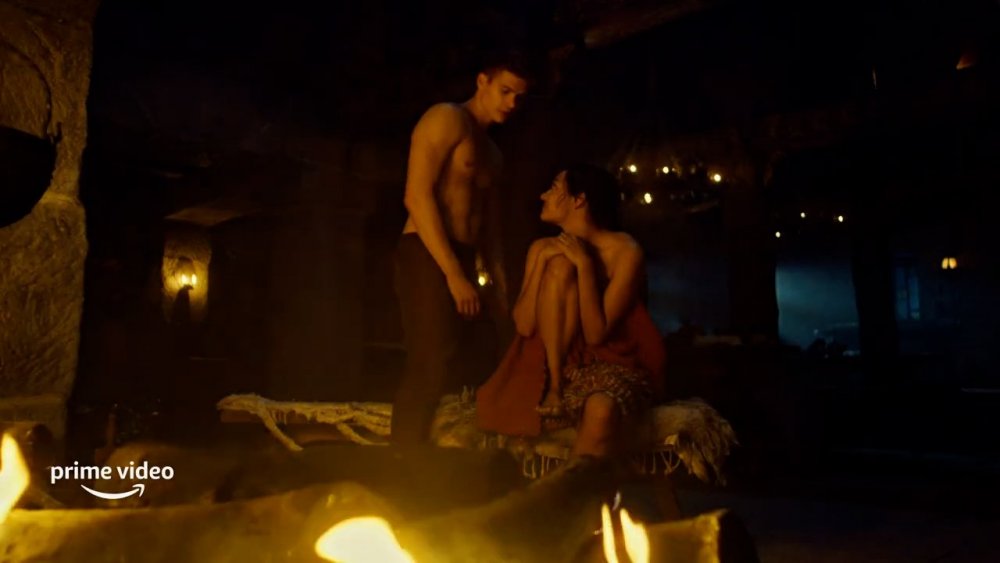 Rand and Egwene en déshabillé? Well, the adaptation has aged the characters up, and it seems that they’ve tossed out the wide-eyed innocence of these country folk with community-governed moral codes. It changes the character of their relationship in the book, which was more of friends who cared for each other, but who, when freed from the expectations of their community to marry, pursued different dreams. 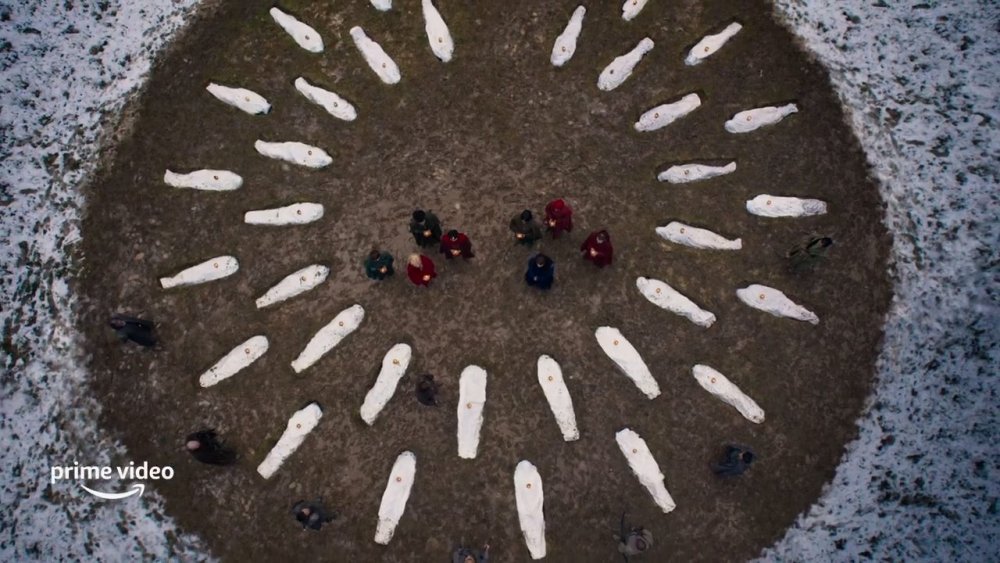 The images seem to juxtapose dancing at the Beltine festival with the aftermath of the Trolloc attack at Winternight. The overhead view of the Hall of the Tower completes the third circle, all references to the Wheel, of course. 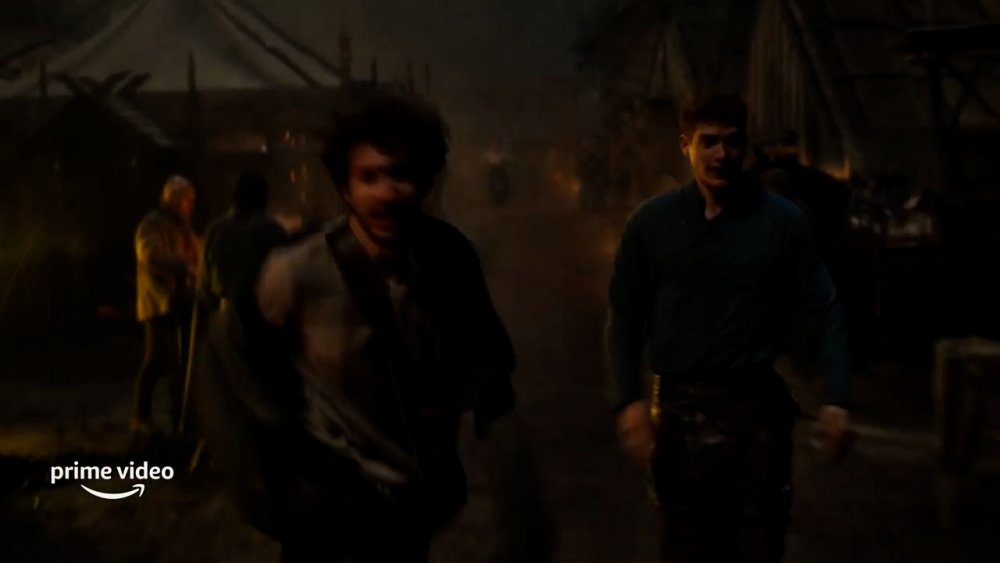 It looks like Rand will be in town during the attack. I’m a little disappointed if that means we won’t see the attack on the al’Thor farm and the lonely, frightened trek through the Westwood. But it looks intense. 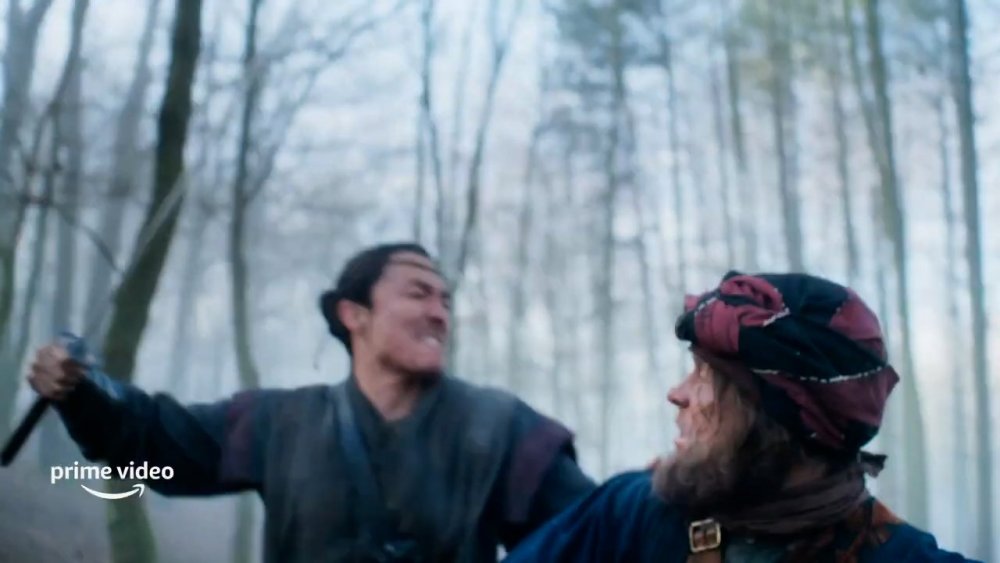 During the sunlight, Lan fights human soldiers in the woods. This isn’t the Trolloc attack (unless there are now Darkfriend soldiers too), so it must pair with the arrows flying in 0:49, and the very next shot suggests that this is the taking of Logain, and that Moiraine and Lan were involved, another departure from the books. We never see Logain channel in The Eye of the World, but the adaptation shows him breaking his shield and doing some damage. Putting Logain “on camera” is a good strategy for illustrating how dangerous and unpredictable a man channeling can be. He radiates danger, even locked in a cage.

1:24 Moiraine in the White Tower 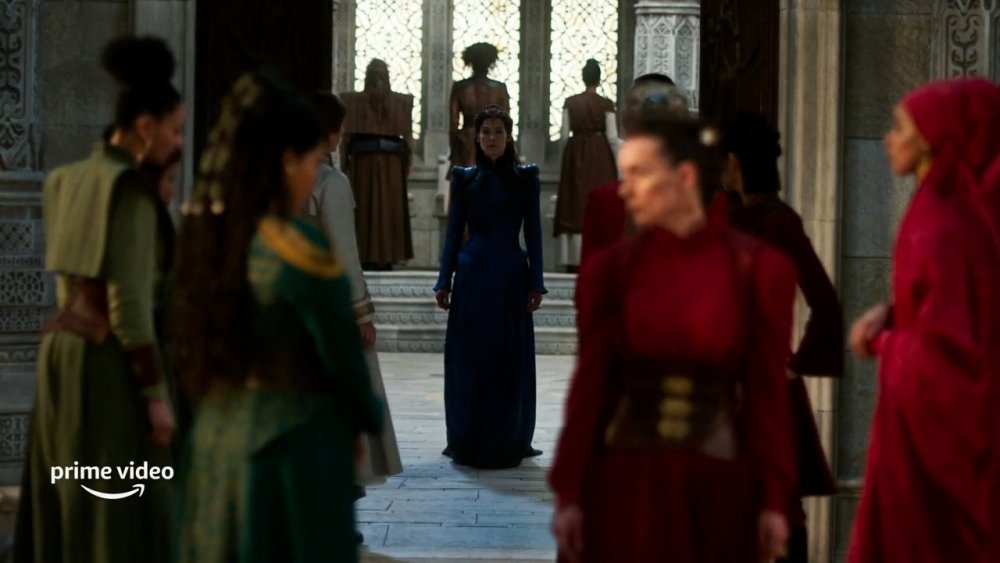 This scene wouldn’t be out of place in the adaptation of The Great Hunt, but Kerene’s words indicate this is setting up the search for the real Dragon Reborn. 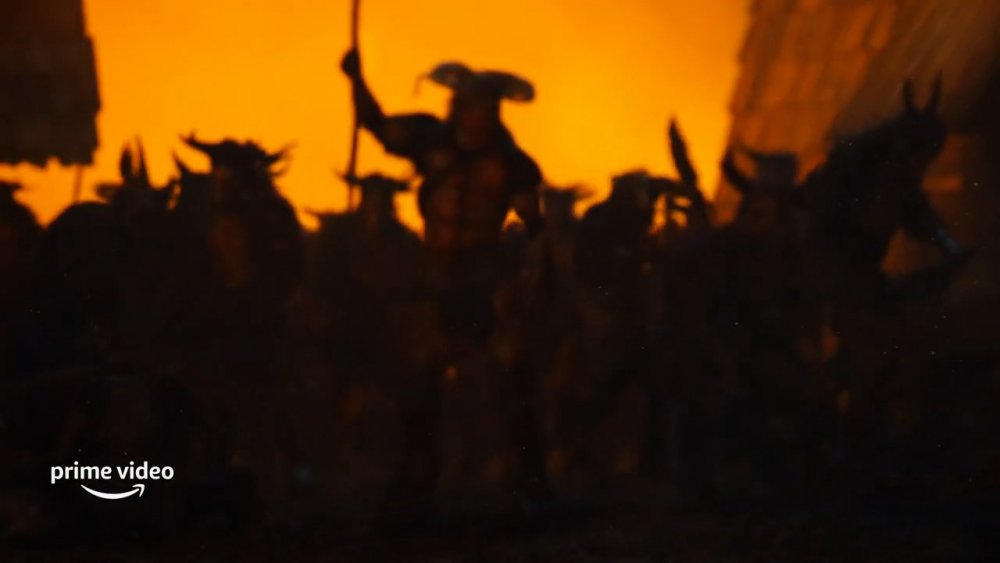 The silhouettes of these Shadowspawn look like the Trollocs on the original book covers which, though they’re not book-accurate, are still iconic in many minds. I look forward to seeing them in detail. They do appear to be more bestial than the book covers, and true to the descriptions.

1:31 Dual Axe Guy versus a channeler 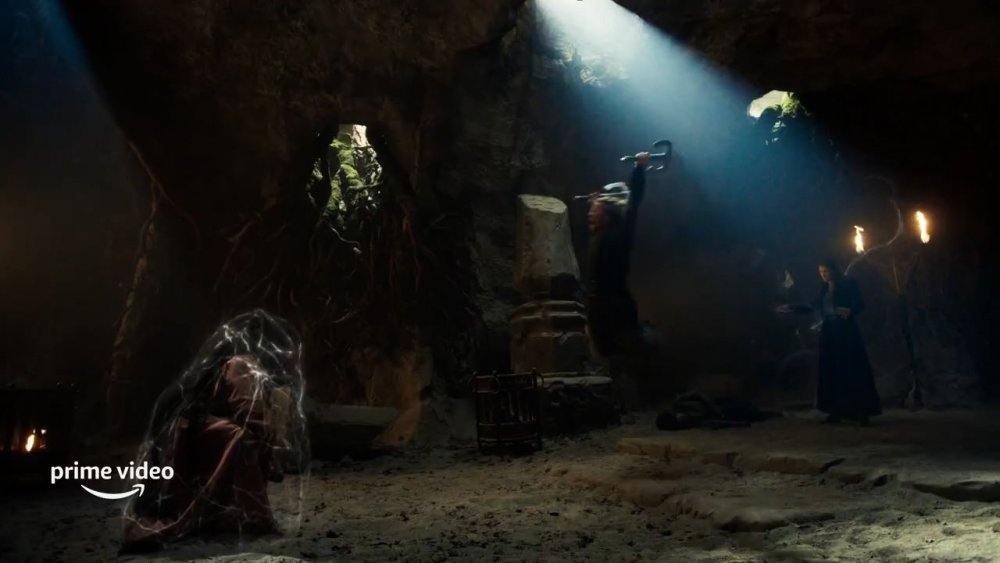 This must be a Warder attacking Logain. Is he shielded, or can we see male weaves? Is that darkness oozing along the weaves? This looks to be the same Warder who was crying over a Great Serpent ring. 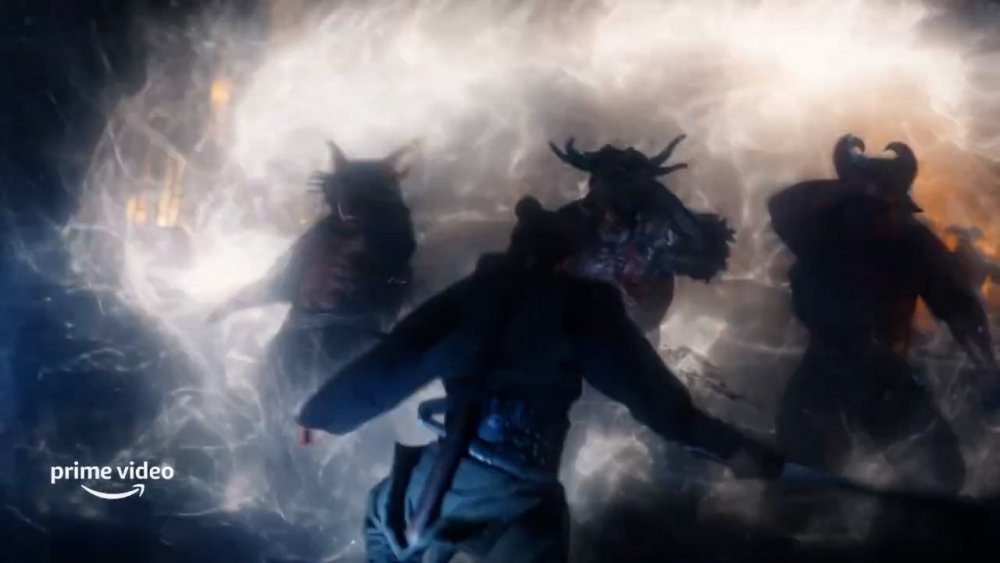 In the books, we only heard about how Lan and Moiraine were a whirlwind of death for the Trollocs at Emond’s Field. Now we’ll see it.

1:33 Seven ride to the Waygate As commentary on the show’s poster image confirmed, this is a Waygate. There seem to be seven riders gathered to venture into the dark. Lan, Moiraine, Rand, Perrin, Mat, Egwene, Nynaeve, Loial… Are we missing someone, or are they just not on screen? Myrddraal are scary in the book. They’re horrifying in the show.

What did you notice in this first trailer for Amazon Prime's The Wheel of Time?