Rajiv's Threads In the Pattern: A Different Dance

Fantasy readers may think they know the steps to Rand’s and Egwene’s dance, but the Wheel weaves them a different fate, as the opposing forces that together weave the Pattern. (SPOILERS for The Wheel of Time and The Chronicles of Prydain.) 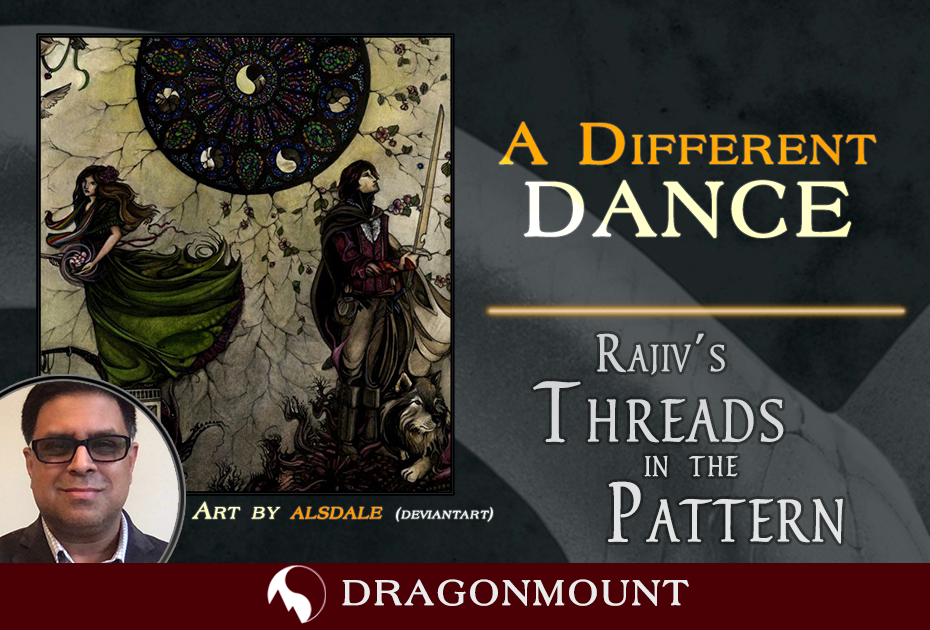 “You’re in love with her.” He stared at her. “I can tell that even without seeing any images. She loves you, too, but she’s not for you, or you for her. Not in the way you both want.”
--“Strangers and Friends”, The Eye of the World

First time readers of The Wheel of Time can be forgiven for thinking that Rand and Egwene will end up together as a couple at the end of the story. Robert Jordan introduced the two with a well-worn trope that fantasy readers recognize. In the eyes of their village, they’re all but betrothed. Rand is tongue-tied and awkward around Egwene. Egwene says and does things that challenge Rand’s entire world view. They bicker, Rand expressing a clumsy protectiveness, and Egwene chafing against it. But underneath, we know that they really care for each other.

All they need is to go their separate ways for a while, grow up some, and realize that despite how they’ve changed, they remain meant for each other. Reading The Eye of the World, I remember feeling the vibes of Lloyd Alexander’s The Chronicles of Prydain, with its coming-of-age romance between Taran the farm boy and Eilonwy the nascent sorceress. Confusion, bickering, then love. Expectations led me to overlook details as obvious as Min’s prophetic warning (shown above), so I was shocked when Egwene told Rand, in The Shadow Rising, that she didn’t love him, and he told her the same.

“Please try to understand,” she said in a gentler voice. “People change, Rand. Feelings change. When people are apart, sometimes they grow apart. I love you as I would a brother, perhaps more than a brother, but not to marry. Can you understand that?”

He managed a rueful grin. “I really am a fool. I didn’t really believe you might change, too. Egwene, I do not want to marry you, either. I did not want to change, I didn’t try to, but it happened. If you knew how much this means to me. Not having to pretend. Not being afraid I’ll hurt you. I never wanted to do that, Egwene. Never to hurt you.”
--“Playing With Fire”, The Shadow Rising

Both Rand and Egwene have atypical heroes’ journeys. Unlike “there and back again” fantasy epics, Rand and Egwene never return to Emond’s Field. Theirs is not a story about the promise of young love fulfilled. Their story--along with a great deal of The Wheel of Time’s--is about leaving old things behind and embracing new ways. Growth is forward, not circling back. Egwene telegraphs her intent in an additional prologue at the age of nine, and also when we first meet her in the first book.

“She wanted to see those lands that Jain Farstrider had written about. How would a husband feel about that? About his wife going off to see strange lands. Nobody ever left the Two Rivers, as far as she knew.
I will, she vowed silently.”
--“Ravens”, From the Two Rivers

“A Wisdom almost never marries. Nynaeve has been teaching me, you know. She says I have a talent, that I can learn to listen to the wind. Nynaeve says not all Wisdoms can, even if they say they do.”
--“The Peddler”, The Eye of the World

While the rest of the Emond’s Fielders are reluctant heroes, dutifully refusing Joseph Campbell’s Call to Adventure, Egwene is fueled by curiosity and ambition from the very beginning. The heart of the bickering between Egwene and Rand is Egwene’s eagerness to surpass the boundaries life set for her, and Rand interpreting her rejection of old ties as a rejection of him. Correctly so. In the world of The Wheel of Time, gender essentialism is a reality, and though men and women can both rise to high positions of authority, their paths and spheres of influence are separate. There are Wisdoms and mayors, Wise Ones and Clan Chiefs, Amyrlins and the Dragon Reborn.

During Egwene’s test for Accepted in The Dragon Reborn, Egwene sees glimpses of other possible lives. The test is designed to wash her clean of crimes committed and suffered in the past, false pride and ambition, and false ties that bind her to the world. Each of the three trials requires her to reject Rand: as a husband and father to her daughter, as a friend desperate for help, and as a prisoner needing her merciful judgment. To be Aes Sedai, fate and the Wheel demanded Egwene walk away from Rand and pledge her loyalty to the White Tower.

Sadly, that is precisely what the Pattern demands, at least until the very end. In every other alternate world, the Dark One won. Rand saw those other realities, those other failures, as he flickered through the mirror worlds connected by the Portal Stones.

“Egwene married him; Egwene, stern-faced in the stole of the Amyrlin Seat, led the Aes Sedai who gentled him; Egwene, with tears in her eyes, plunged a dagger into his heart, and he thanked her as he died.”
--”What Might Be”, The Great Hunt

Only in the fullness of a series re-read did I see that, by the time they reunite in The Shadow Rising, Rand and Egwene have both seen that they literally have no future together. Rand was the Dragon Reborn. Egwene’s path lay toward the Amyrlin Seat who would unite the White Tower to oppose the Dark One. If Rand represented saidin, Egwene represented saidar, the opposing principle that pushed against Rand and was pushed by him, like the black and white parts of the ancient symbol of the Aes Sedai. They were forces in dynamic opposition, keeping the Wheel turning.

There was a parallel dynamic in the Age of Legends, between the previous Dragon, Lews Therin Telamon, and a powerful and influential woman named Latra Posae Decume, also known as Shadar Nor, or “the Slicer of the Shadow.”

“Support for the use of the great sa’angreal [against the Dark One] and opposition to attempting to implant the seals centered around a woman named Latra Posae Decume. Apparently a speaker of considerable force and persuasion, she gathered a large bloc around her, but what assured her victory was an agreement she reached with every female Aes Sedai of significant strength on the side of the Light. (In the manuscript, this agreement is called “the Fateful Concord,” though it was doubtful that this was the name it was generally known.) Lews Therin’s plan was too rash, too dangerous, and no woman who agreed to the Concord would take part in it. As precise placement of the seals was widely thought to require a circle, that apparently killed the plan, since men cannot create a circle, but can only be brought into one created by women.”
--“The Strike at Shayol Ghul”, The World of Robert Jordan’s The Wheel of Time

While there’s no definitive evidence that Egwene is Latra Posae reborn, there’s a symmetry in the tipping point as Rand attempted to negotiate The Dragon’s Peace before he went to Shayol Ghul. As Amyrlin Seat, Egwene was Rand’s equal in stature, just as Latra Posae was an equal of Lews Therin’s, and Egwene was prepared to oppose Rand’s plans to break the ancient seals on the Dark One’s prison. Only Moiraine’s intervention made this turning of the Wheel one where men and women worked in concert.

“You still insist that you must break the seals?” Egwene said.
“Do not worry, Egwene,” Moiraine said, smiling. “He is not going to break the seals.”
Rand’s face darkened.
Egwene smiled.
“You are going to break them,” Moiraine said to Egwene.
“What? Of course I’m not!”
“You are the Watcher of the Seals, Mother,” Moiraine said. “Did you not hear what I said earlier? ‘It shall come to pass that what men made shall be shattered, and the Shadow shall lie across the Pattern of the Age, and the Dark One shall once more lay his hand upon the world of man…’ It must happen. … You know the truth of this one. It does need to be done, and the seals are yours. You will break them, when the time is right. Rand, Lord Dragon Reborn, it is time to give them to her.”
--”A Knack”, A Memory of Light

If the original sin in The Wheel of Time cosmology was the schism between the genders enacted by Lews Therin and Latra Posae, the eleventh hour accord between Rand and Egwne grants the world absolution, and heals the rift. And as Rand realized in his long, dark night of the soul atop Dragonmount, this was the entire point. To try again, and do better.

“Why do we live again? Lew Therin asked, suddenly. His voice was crisp and distinct.
Yes, Rand said, pleading. Tell me. Why?

Maybe… Lews Therin said, shockingly lucid, not a hint of madness to him. He spoke softly, reverently. Why? Could it be… Maybe it’s so that we can have a second chance.

Why? Rand thought with wonder. Because each time we live, we get to love again.

I want to do it right this time.”
--”Veins of Gold”, The Gathering Storm