Gender Essentialism and The Wheel of Time 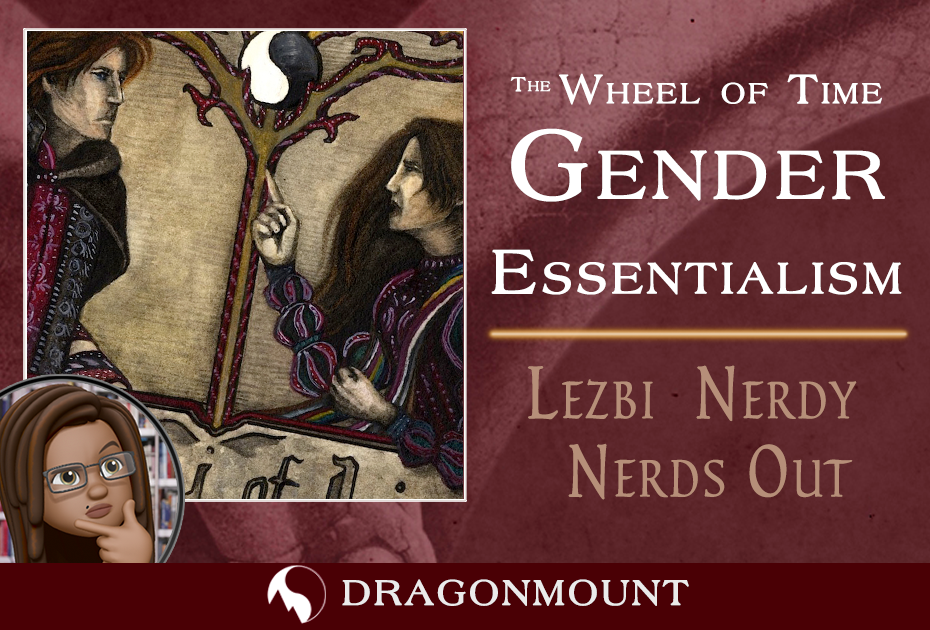 Lezbi Nerdy is a Wheel of Time content creator who recently realized that she has been reading and re-reading the Wheel of Time for more than half of her life, which freaked her out a little bit.  When not obsessing over Wheel of Time and other nerdy pursuits, she works at a language therapy center in South Korea and enjoys long, socially distanced walks while wearing a mask and listening to podcasts.

The Wheel of Time changed the way I read.  So much so that I have in the past claimed that it is the first fantasy series I ever read, which in retrospect is just not true.  I have also said that The Eye of the World was the first “real adult book” I ever read, which… also, in retrospect, has turned out to not be true.  But it definitely feels true, and when trying to figure out why, I think I have landed on an answer.  The Wheel of Time changed how I read books. It turned me into an active reader in a way that just makes it feel like a turning point in my reading life.  This may simply be a by-product of the fact that I am an old-school fan, I was reading before the series was finished, and am among those who had to wait years between books, and wait over a decade to have the story finished.  So, in the time I was waiting, I thought about these books, and about where the story was going, I made guesses and had theories.  This is something I had never done prior to these books because I hadn’t needed to.  The stories I had read before were just… there.  I didn’t have to guess because if I just kept going, I’d find the answer.

But I think it was more than just the wait for more books that caused this change in me.  The story, the world that Robert Jordan crafted just lends itself to theorizing.  The world is so wide in scope, that even with the story finished, there are still questions left.  And there is such depth to the world building that even if there are no canonical answers, it feels like there are.

And so, when reading and re-reading this series before it was complete, my head was full of theories.  And there is one theory that, while it didn’t bear out in the end, I think it is worth examining.

The world of Wheel of Time is a world that has fractured along gender lines.  It is a world in which gender essentialism is… well, it’s true.  We have a magic system that divides things along very binary gender lines.  All male channelers must use saidin, and all female channelers must use saidar.  And those two sources of power are inherently different.  It is gender essentialism written into the foundational magic system that turns the eponymous Wheel of Time.

Characters in the books often muse at the nature of members of the opposite sex.  Men are spoken of by women in absolutes, and vice versa.  Women undertake actions and understand ideas that men don’t seem to know much about (for example, that a Two Rivers good wife would change the curtains in a house depending on the season), and men do things that women can’t seem to understand or dismiss as illogical.  It happens to such a degree that it can become frustrating to readers, even annoying, to hear these characters lump all members of the opposite gender into one group, to paint them all with broad brush strokes as all being the same.

But as I read, and re-read, I came to the conclusion that this was intentional, it had to be.  It had to be a symptom of something that was wrong and broken in their fictional world.  And it was a symptom that made sense to me.  If the foundational magic system of the world seemingly tells people that men and women are fundamentally different, and in fact, unknowable to each other, then why wouldn’t people just accept this as fact and not examine it further?   As Moiraine says in The Great Hunt, “A bird cannot teach a fish to fly, nor a fish teach a bird to swim.”

But of course, the fact that these differences between genders lean into very common and frustrating gender stereotypes was… well, as a woman, it was frustrating.  In order to use the male half of the source, men have to approach it directly, from the front, dominate it through force.  In order to use the female half of the source, women have to surrender to it, submit, and control subtly from within, or underneath the power.

We see this play out in the way men and women use and gain power in the world of The Wheel of Time.  Men, for the most part; battle, conquer, or negotiate directly by saying what they want clearly.  The women, on the other hand, the women in power in the books are mostly seen as manipulators, they pull the strings behind the scenes.  There are, of course, exceptions to these ‘rules’, but in general, this is how things work in this world.  And because of our cultural biases, these two methods are not viewed equally.  Battling, conquering, being direct… most readers see these as noble characteristics, brave even.  Manipulating, pulling strings… most readers will see these as sneaky, underhanded methods. Even if both of these methods are used to achieve the same goals, they are not view equally. These factors color how characters and organizations are viewed. 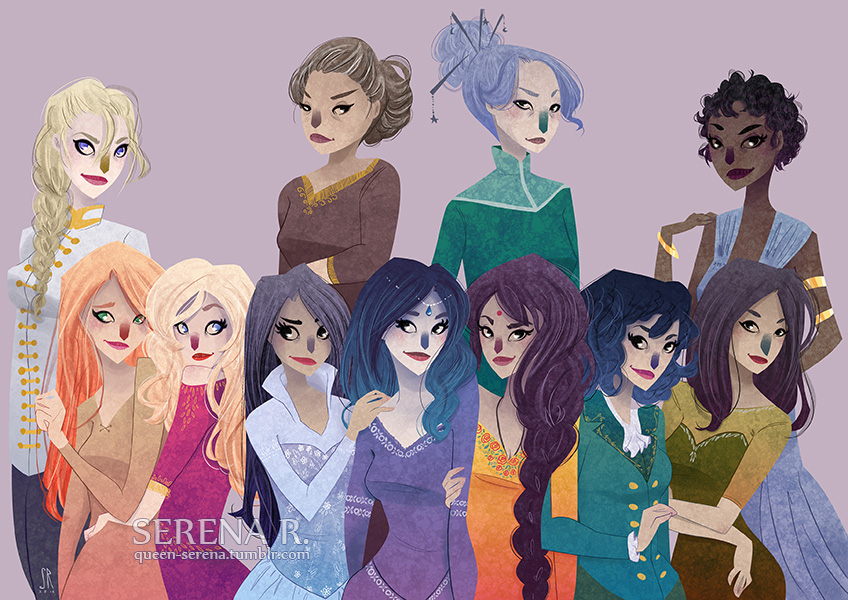 But again, this divide, this break between genders is literally baked into the foundation of this world.  Men must be dominant, because if they aren’t and they are a channeler, they literally won’t be able to channel.  And women must be surrendering, because if they are not able to surrender, then they literally won’t be able to channel.  If they do not conform, then they must learn to conform in order to fully grow into who they are meant to be.  Gender essentialism is enforced by how things work.

But gender essentialism is wrong.  Gender essentialism says that there are universal, immutable, intrinsic qualities to being male or female, and anyone with any sense knows that this is not true. I can tell you that in my over 20 years of teaching experience, there isn’t a single quality, hobby, or personality type that I could say universally applies to all the boys I’ve taught or all the girls.  There are numerous exceptions to every gender rule I can think of.  Even in that same conversation I previously mentioned in The Great Hunt, Verin comments on the faulty logic of the fish metaphor.  “There are birds that dive and swim. And in the Sea of Storms are fish that fly…” These universal generalities about “all women” and “all men” only serve to divide us and to make anyone who doesn’t fit feel like an outsider. To read more about gender essentialism, you can read this piece on Gender Essentialism Theory by Dr. E. Boskey. 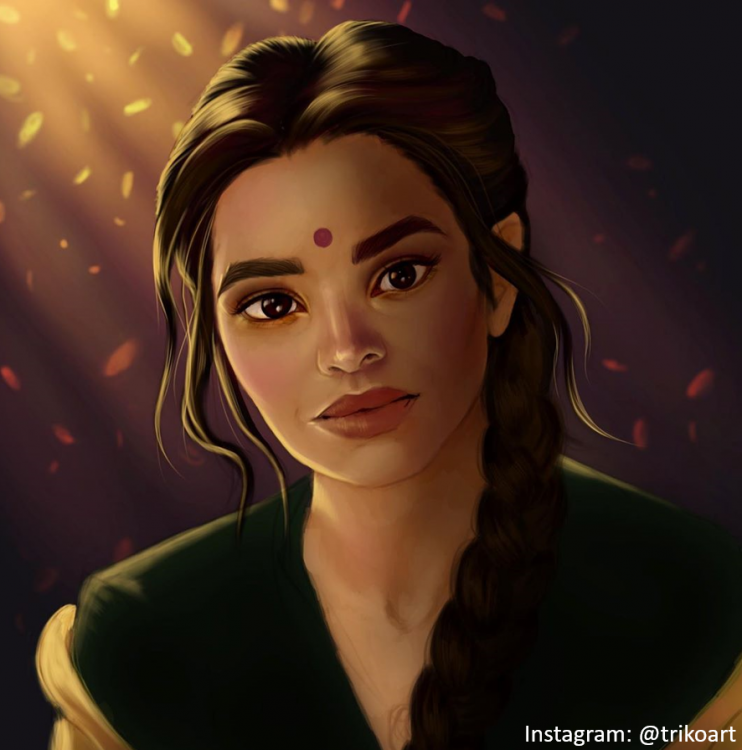 If you know my YouTube channel, then you probably know that Nynaeve is my girl.  She is my favourite character, hands down, and so she is the person I have thought the most about, and so yeah… on my re-reads it started to dawn on me that it didn’t make any sense that Nynaeve, for the first part of the series, can only channel when angry.  It goes against everything we know about the nature of saidar and female channeling.  Women are only supposed to be able to channel when calm, but that is out the window with Nynaeve, because she has to be livid to be able to ‘embrace the source’.  And secondly, women are supposed to only be able to channel through surrendering to the vastness of the One Power – literally are only able to use power by surrendering to power.  Now, maybe this is me, but anger is not a surrendering emotion in my book.  And from what we read and know of Nynaeve, it isn’t one for her too.  When she is angry, she bowls over people, she takes charge, she is blunt and direct, violent even.  She is displaying very characteristically masculine traits.  Theodrin even comments that she doesn’t understand how Nynaeve can channel in the first place because it goes against everything she knows about how the female half of the source works.

And I honestly thought that this was the point.  That Nynaeve was going to prove that everything that everyone has assumed about saidar – and saidin as well – was wrong.  That Nynaeve was going to show that women don’t have to surrender, women don’t have to conform to these old and tired stereotypes about how women are manipulative and submissive.  And through this we would also learn that men don’t have to conform to male stereotypes either, they don’t have to be violent, to conquer and dominate.  That while maybe these old ways are easiest for most, they are not essential.  That the male half and female halves of the Source aren’t as unknowable to each other as originally thought, and through that that the world would come to understand that men and women aren’t as foreign to each other as well.  I thought it was going to be a part of the healing that this world was going to go through because of our main characters.

I held out hope for this theory until the final book, even after she surrendered to the source at the bottom of that river.  But it didn’t happen.  I suppose, with the world continuing as it does, that this could be something that happened in the post-book era, but I think I have to accept that this wasn’t a part of Robert Jordan’s original plan.  And, if I’m honest, it is one of the very few things in The Wheel of Time that I’m disappointed with.

I’ve said before that I always assume good intent with Robert Jordan, and even in this area this still stands.  I think that it was his intent to show the value in both ‘sides’ of the coin, to show that men and women must work together, that equality and cooperation are goals worth striving for.  But gender essentialism is an inherently limiting philosophy.   And when there are strict lines drawn between two sides, it practically invites people to make judgements about which is better.

But with the show coming out, I think that there is a new opportunity to address this issue in the world of Wheel of Time in a way that doesn’t lock men and women into outdated stereotypes that were never universally true in the first place.  Obviously, I am attached to my personal theory about how this could be addressed; but regardless of how it is done, I think it would be in keeping with Robert Jordan’s vision of healing the divide between genders to not stick to the fundamentally flawed principle of gender essentialism.

But these, of course, are only my thoughts.  What are yours? How do you feel about the role gender essentialism plays in The Wheel of Time?