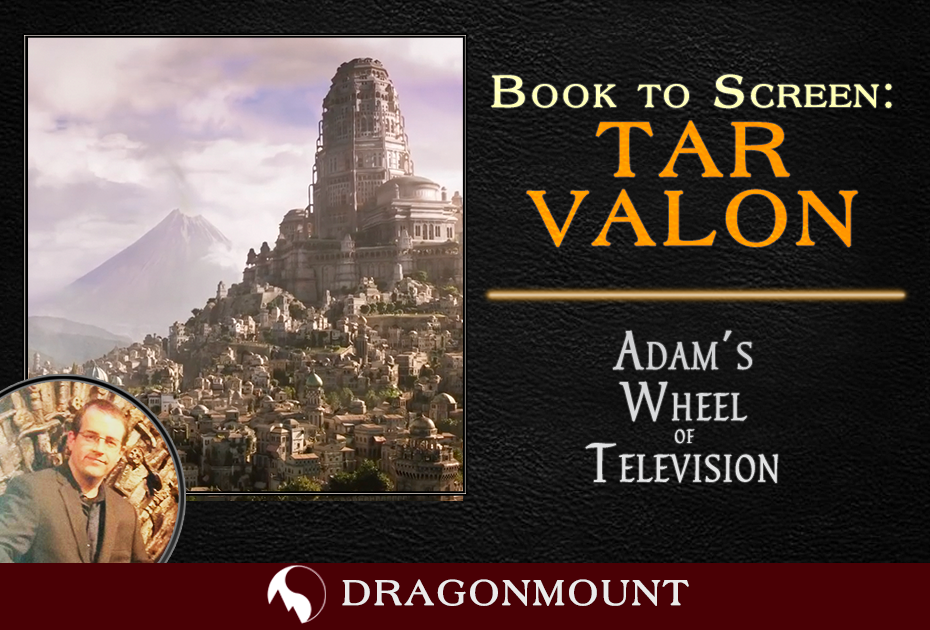 It’s also our first chance to see the world where the action takes place. Robert Jordan’s worldbuilding has been acclaimed as among the best in the genre, maybe not quite on J.R.R. Tolkien’s level (and Tolkien might have taken especial exception to Jordan’s lack of different languages) but certainly still remarkable in its detail, depth and breadth. 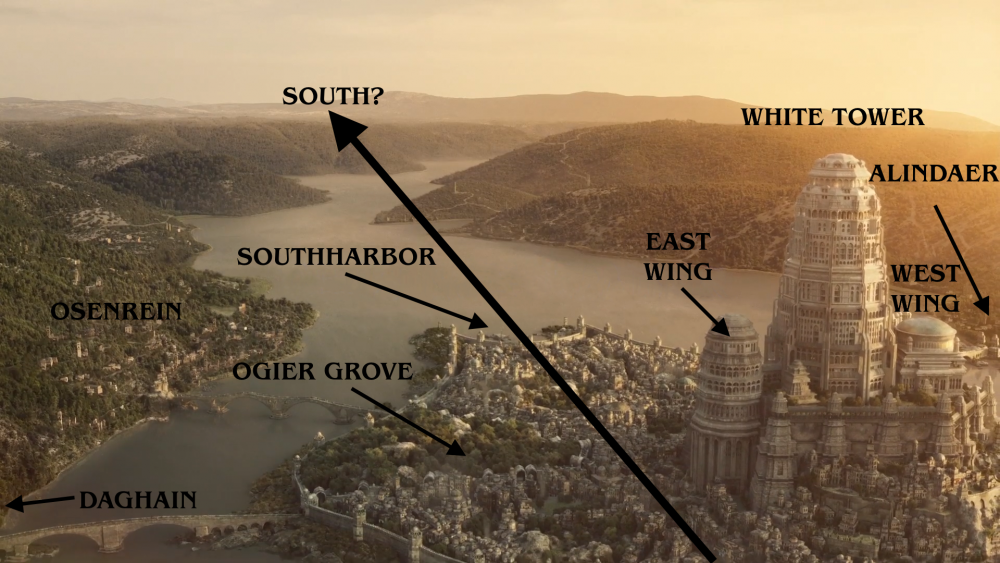 At the centre of Jordan’s world – figuratively and thematically, if not quite geographically – is Tar Valon, the great city which serves as the stronghold of the Aes Sedai sisterhood. The city is located on an island in the midst of the River Erinin, roughly sixteen hundred miles north of where it flows into the Sea of Storms in the vast delta known as the Fingers of the Dragon, and acts as a meeting point between the four kingdoms of the Borderlands to the north and the great southern nations of Cairhien, Andor and Tear. The city has famously withstood siege numerous times (on four occasions in the Trolloc Wars alone) and never fallen in battle, although fighting has raged on the streets of the city during both the Trolloc Wars and the War of the Second Dragon against Guaire Amalasan, when Artur Hawkwing saved the city from the false Dragon’s followers to the humiliation of Bonwhin, the Amyrlin Seat. 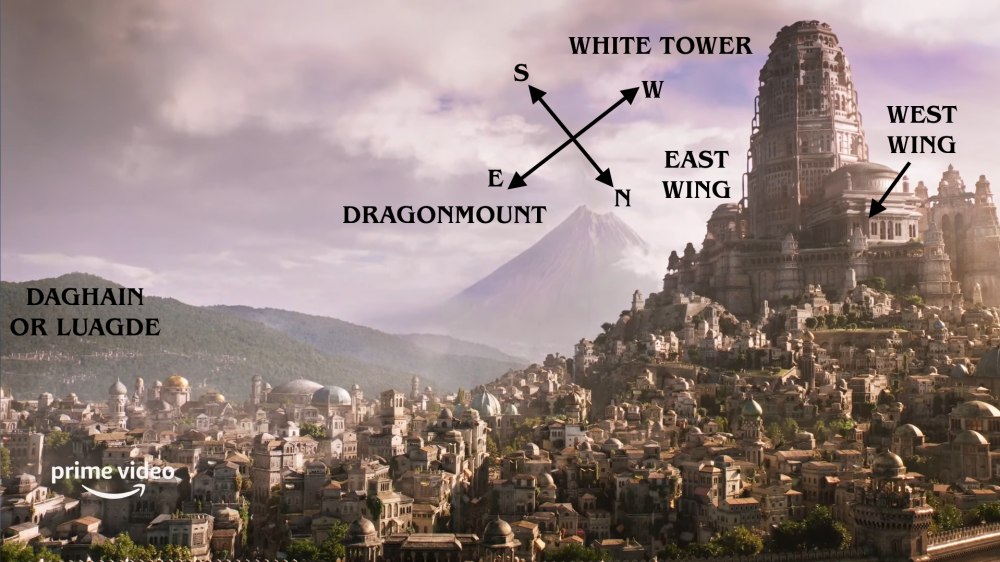 By comparing the two images, we can be sure that in this image we are looking more or less due east, with Dragonmount now visible in a different direction to in the books. Assuming the island has not been flipped 180 degrees, which would make this looking west instead.

Tar Valon serves as some of a hub for events in the novels, with news and events flowing into the office of the Amyrlin Seat, first Siuan Sanche and later Elaida do Avriny a’Roihan, and various characters base themselves in the city at different times. For the TV show, Tar Valon’s importance seems to have been bolstered even further; all of the shots of contemporary cities in the trailer are exclusively of Tar Valon, with the other major cities from The Eye of the World – Fal Dara and Caemlyn – completely missing. Only ruined Shadar Logoth gets comparable screen time. Whether this means that Tar Valon is replacing Caemlyn as the geographic hub of the early story remains to be seen. 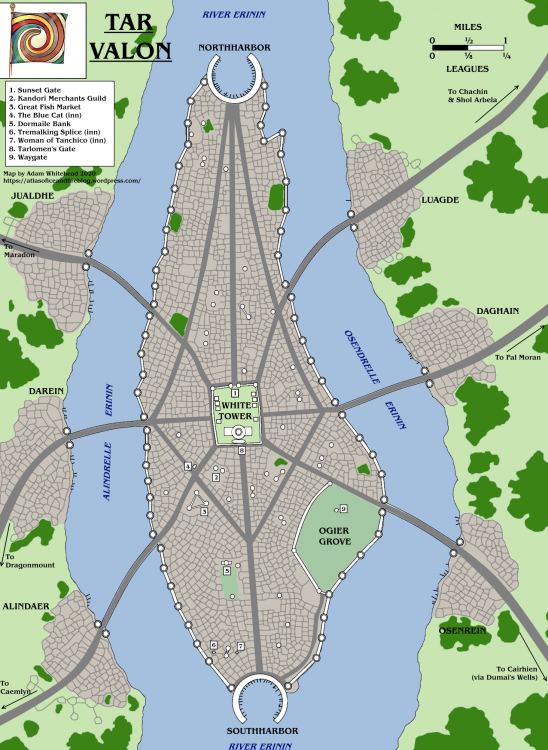 A recreation of the book map of Tar Valon.

What we can do is compare and contrast the book and TV versions of Tar Valon, and immediately we can see some major differences. Tar Valon in the books is substantial in size: the island is eight miles long and over two miles wide at its widest point, making it almost a ringer for Manhattan Island. The White Tower is located almost at the geographic centre of the island, in a position almost comparable to the Empire State Building in Manhattan. The White Tower is 600 feet tall, just under half the height of the Empire State, but given it was constructed by human and Ogier hands (with some help from the Aes Sedai) without 20th Century cranes or construction materials or techniques, that’s still very impressive. The White Tower was designed to house around 3,000 Aes Sedai with room for expansion, via the cavernous Ajah quarters making up almost the entire northern half of the Tower and the huge number of training and teaching rooms in the southern half, not to mention the extensive store rooms below ground and the two wings radiating out from the Tower itself, designed to hold many hundreds of Accepted and novices. However, with the Aes Sedai reduced to around 1,200 in number, with maybe a third of that in the Tower at any one time, the building feels largely empty when the series begins. 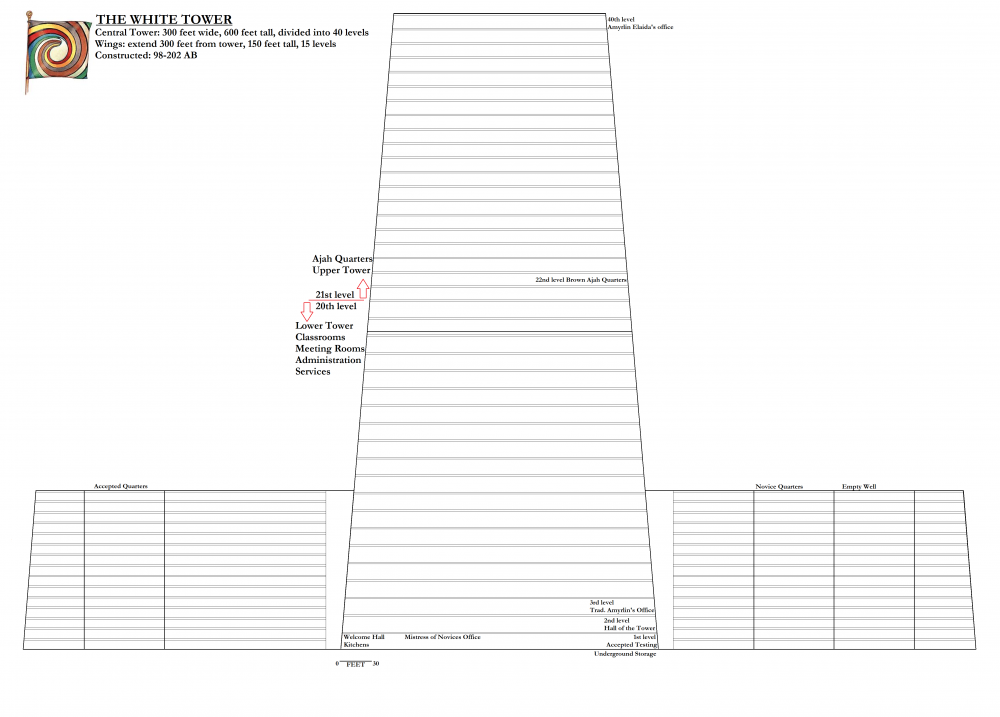 An approximate floorplan of the White Tower, based on the descriptions provided in the novels and the Big White Book.

The White Tower is surprisingly “stubby”; Robert Jordan described the Tower as 100 spans (600 feet, or 183 metres) tall and 300 feet wide at the base, narrowing to 200 feet wide at the top. The width of the Tower at the base is thus around half the total height of the Tower. Despite these descriptions, both fan and professional art from the series often depicts a much slenderer, more ornate tower. The TV version seems to get the relative dimensions of the Tower pleasingly correct. 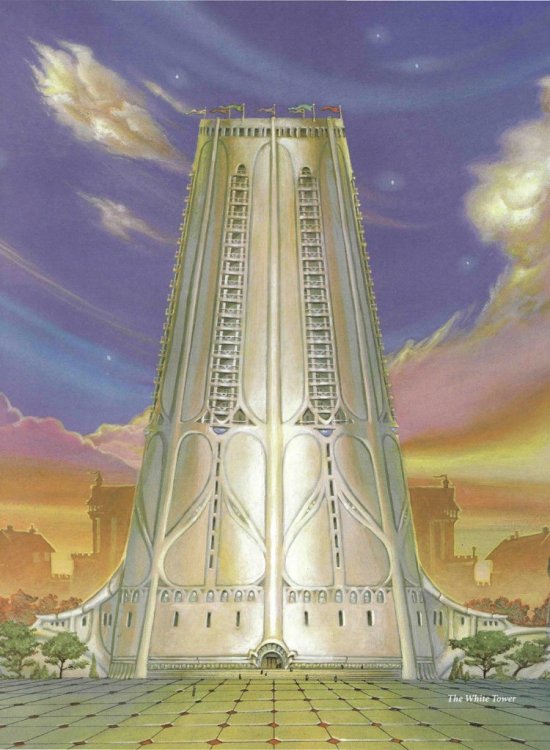 The White Tower as it appears in The World of Robert Jordan's The Wheel of Time. Although the art in the Big White Book is not great, this image seems to reflect Robert Jordan's vision of the Tower relatively well, despite the absence of the wings on either side holding the novice and Accepted quarters and more ornate windows than are described in the books.

However, the TV version does seem to vary from Jordan’s description in several other respects. In the books the White Tower is described as smooth and polished, with no seams visible in the stonework thanks to the One Power being used to fuse the stone into a single structure. Clearly the TV version has visible steams and seems to have been made using more traditional techniques. The Tower in the TV show also has a much more extensive superstructure, with pipes laid over the exterior structure and various sections of the tower extending outwards with viewing areas visible. One promo image has Moiraine standing on one of these areas, looking out across the city. In the book, whilst the Tower has windows it doesn’t have a described viewing area apart from the rooftop viewing platform. 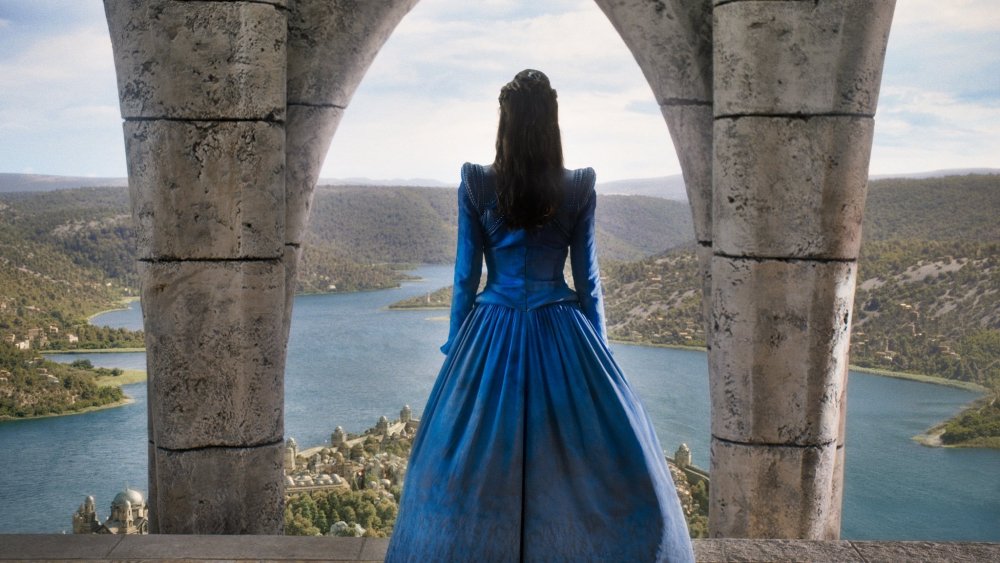 Moiraine gazing out across Tar Valon from the White Tower, in a publicity image released by Amazon.

The TV version of the Tower pleasingly still has the two wings extending out from the side, the home of the Accepted and novice quarters respectively. Several other buildings are shown tightly clustering around the base of the Tower, presumably including the stables, the Warder garrison and the White Tower Library. The complex is walled away from the rest of the city, as in the books.

There are several very big differences here, though. In the books, Tar Valon is flat whilst in the TV show it is hilly, with the White Tower sitting on a massive hill in the middle of the island which simply doesn’t exist in the books. The White Tower grounds in the novels are much bigger, with more space around the buildings, which are spaced further apart, and a large plaza extends out from the walls on all sides, which is clearly not the case here. 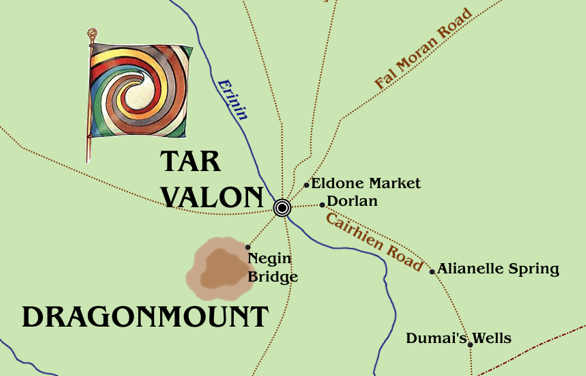 The immediate environs around Tar Valon.

There are also some interesting changes to Tar Valon itself. The biggest one, immediately obvious, is that the TV version of Tar Valon appears to be significantly smaller than its book counterpart. A building half the size of the Empire State Building sitting on an island the size of Manhattan would still be big and clearly visible from across the city, but it would not dominate the entire skyline the same way the White Tower does here. The White Tower does appear to be around its size in the books (by counting the number of windows, around forty levels can be discerned, the same as in the novels), so its much greater dominance of the landscape can only be explained by the island and city being significantly smaller.

It’s an interesting choice, and at first glance mildly disappointing: Tar Valon is a huge medieval metropolis of around half a million people, the economic heart of the northern half of the continent and the seat of Aes Sedai power. It should be huge, grand and imposing. Obviously from a budgetary point of view, the bigger the city is, the more expensive it is in terms of CGI design and render time, and in making sets that integrate with the CG backdrops well.

More to the point, I expect if they did a test render based on the book scale, they decided that the White Tower looked too small and unimpressive compared to the rest of the island and that using the polished white stone look in the novels did not look appropriately awe-inspiring (the occasional complaint raised by artists doing a faithful take on the White Tower is that it can turn into a lighthouse rather easily). Rather than make the White Tower preposterously huge – if the city dimensions were kept the same and the Tower expanded, it’d be over a mile tall in the TV show! -  they seem to have elected to shrink the city and make the Tower more impressive in contrast. 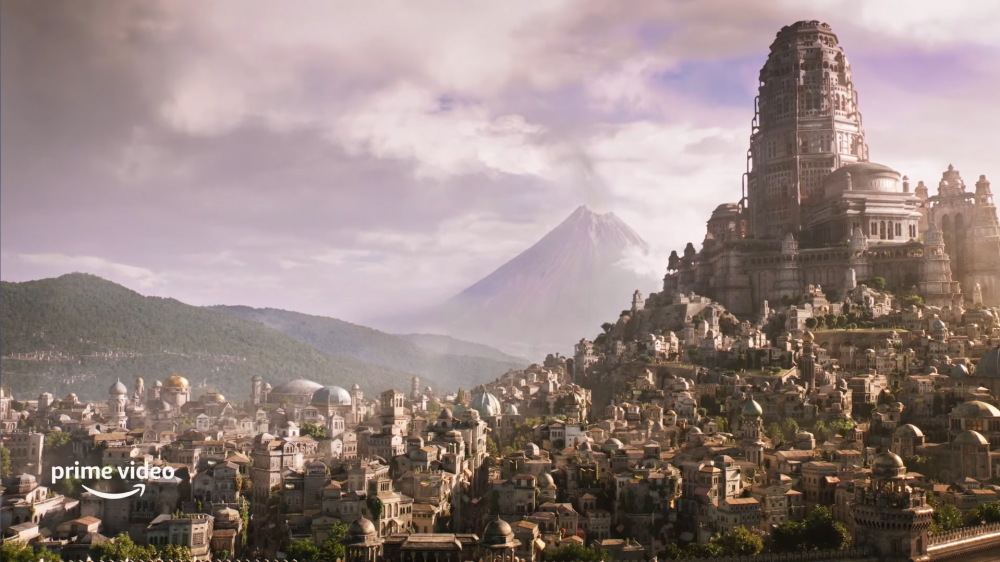 Another interesting change is that the location of Dragonmount seems to have shifted. Dragonmount was located between twenty and thirty miles south-west of the city in the novels, but here it appears to have moved directly east instead (in the promo image the mountain lines up with the wings, rather than 45 degrees to them as would be the case in the novels). A minor change, but a curious one.

Looking in detail at Tar Valon, many different kinds of buildings can be seen, including European-style towers and bastions, Arab-like minarets and ornate domes. There’s no immediate sign of skybridges, but we only see small chunks of the city in these shots. The city’s parks do seem present, including one that might be the huge Ogier grove, and the general shape of the island seems to have been retained (indicating we are looking due south in the first image). Southharbor also seems present and correct, and several of the bridges over the Erinin can be seen, with clusters of buildings on the other end which correspond to the bridge towns. 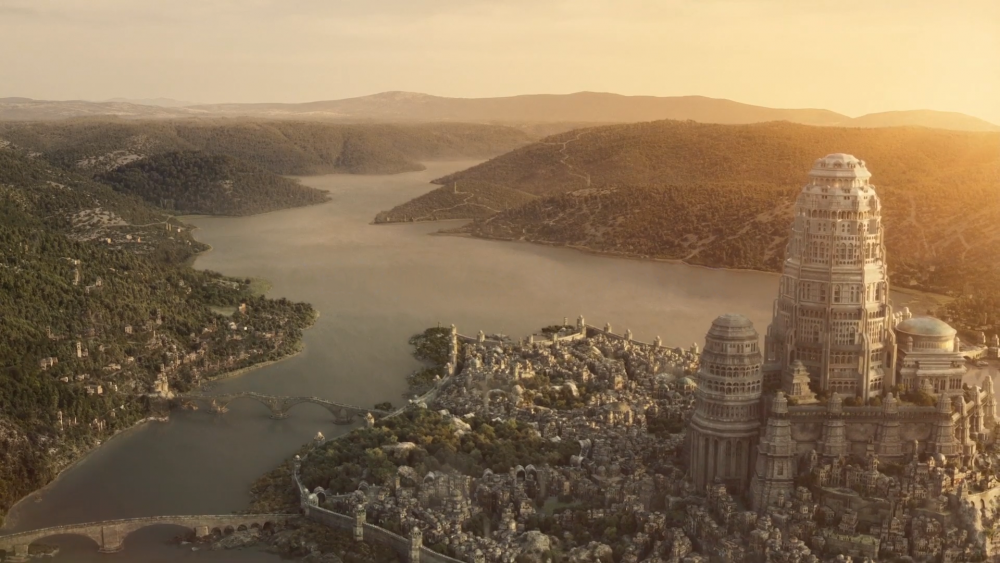 Tar Valon and the White Tower may stand in miniature for the TV show’s relationship with the books as a whole: similar, familiar and impressive but differing in many small details. It’ll be interesting to see what other changes have been made. A second, apparently longer trailer will apparently hit screens before The Wheel of Time itself does on 19 November 2021, on Amazon Prime Television.