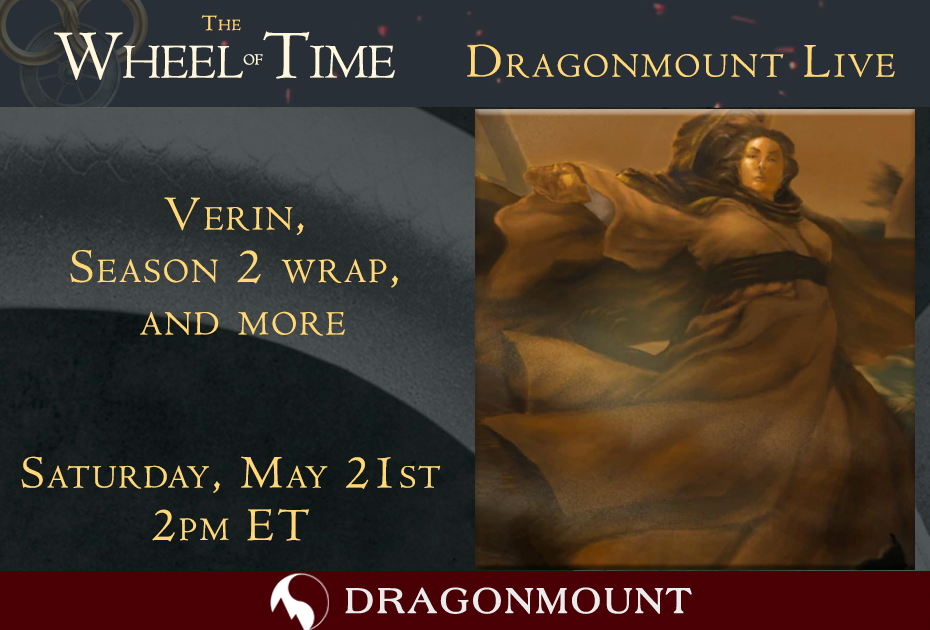 Watch Dragonmount Live on our Instagram feed, Saturday, May 21st, at 2pm ET!

An important message from the Empress of Seanchan

U.S. Citizens: the Empress of Seanchan (may she live forever) has an important message for all of you. She requests commands you to go out and vote on November 2nd, which also happens to to be the release date of a certain book we keep talking about.   If you happen to live in her district, you might be well advised to cast your vote for her.   http://www.youtube.com/watch?v=Yknv169AYUQ?fs=1&hl=en_US&rel=0&hd=1&color1=0x3a3a3a&color2=0x999999">http://www.youtube.com/watch?v=Yknv169AYUQ?fs=1&hl=en_US&rel=0&hd=1&color1=0x3a3a3a&color2=0x999999">   Thanks to Andrew" rel="external nofollow">http://twitter.com/andrewmjordan">Andrew Jordan for producing this fun video.

<p>The 4th Age podcast presents Episode 94, WoT You Need to Know about the upcoming <em><strong>Towers of Midnight</strong></em> signing tour! Virginia and Spencer highlight where the 4th Age members will be doing a live streaming podcast for you! ToM will be released on November 2nd, 2010. Check out <a href="http://www.dragonmount.com/index.php/News/tom/book-tour-info-for-towers-of-midnight-r33">Dragonmount.com</a> for all the details.</p><p>We are jumping ahead in number sequence here to get this out to you all before the release date for ToM. Never fear – all of the podcasts in between WILL be posted now that the podcast page and the new Dragonmount server are playing nicely together.</p><p><span style="color: #ff0000;"><strong>ATTENTION! THERE ARE NO TOWERS OF MIDNIGHT SPOILERS!</strong> </span><em>But spoilers on ALL the other books are VERY likely! </em>There will be spoilers, just none for ToM! If you haven’t read all the way through the Wheel of Time, THERE WILL BE SPOILERS of all previous books! Maybe of other series, too…. we will try to give warning.</p><p>Hosts: Virginia and Spencer</p><h6>Editor: Spencer Music by: Josh Needleman His website is at <a href="http://www.joshneedleman.net/">www.joshneedleman.net</a> and he has the music available to hear on his MySpace page at <a href="http://www.myspace.com/joshneedleman">www.myspace.com/joshneedleman</a>. It’s title is <em>Floodgate</em>. Thanks, Josh!</h6><div><strong><a href="http://www.dragonmount.com/Podcast/Media/dm-4thAge-094.mp3">Download this Episode now</a></strong></div><img src="http://feeds.feedburner.com/~r/4thAge/~4/VHyO4VS0b40" height="1" width="1"/>

TOWERS OF MIDNIGHT Round Up

The Wheel of Time Recap

Forgotten what's what and who's where? In preperation for the release of Towers of Midnight on November 2nd, Dragonmount is happy to provide you with this summary of the major plotlines, and listing of where the characters are at and what they're about up to the end of The Gathering Storm. It's a quick and easy way to get yourself back up to date and ready for November 2nd.   Note: There are no Towers of Midnight spoilers in this recap.   You can download the PDF here. Enjoy!

<p>The 4th Age podcast presents Episode 93, a spoiler-free look at the anxiously awaited <em><strong>Towers of Midnight</strong></em>! In this segment we are pleased to welcome three SPECIAL GUESTS: Leigh Butler of the famous <a href="http://www.tor.com/blogs/2009/02/wheel-of-time-re-read-index">Wheel'>http://www.tor.com/blogs/2009/02/wheel-of-time-re-read-index">Wheel of Time Re-read Blog</a> on Tor.com, as well as Jason Denzel and Jennifer Liang of <a href="../../">Dragonmount.com</a>! They join Virginia for a fun and spoiler-free look at the book which will be released on November 2nd, 2010.</p><p>We are jumping ahead in number sequence here to get this out to you all before the release date for ToM. Never fear – all of the podcasts in between WILL be posted now that the podcast page and the new Dragonmount server are playing nicely together.</p><p><span style="color: #ff0000;"><strong>ATTENTION! THERE ARE NO TOWERS OF MIDNIGHT SPOILERS!</strong> </span><em>But spoilers on ALL the other books are VERY likely! </em>There will be spoilers, just none for ToM! If you haven’t read all the way through the Wheel of Time, THERE WILL BE SPOILERS of all previous books! Maybe of other series, too…. we will try to give warning.</p><p>Hosts: Virginia and SPECIAL GUESTS Leigh Butler of the famous <a href="http://www.tor.com/blogs/2009/02/wheel-of-time-re-read-index">Wheel of Time Re-Read Blog</a> on Tor.com as well as Jason Denzel, founder and owner of Dragonmount.com and Jennifer Liang,  Dragonmount administrator and driving force behind JordanCon (see <a href="http://www.ageoflegends.net/">AgeOfLegends.net</a>) and other WoT events at DragonCon, etc..</p><p>Regular co-hosts Andrew and Spencer had scheduling conflicts and unfortunately could not join us for this recording, but they will be back, never fear!</p><h6>Editor: Spencer Music by: Josh Needleman His website is at <a href="http://www.joshneedleman.net/">www.joshneedleman.net</a> and he has the music available to hear on his MySpace page at <a href="http://www.myspace.com/joshneedleman">www.myspace.com/joshneedleman</a>. It’s title is <em>Floodgate</em>. Thanks, Josh!</h6><div><strong><a href="http://www.dragonmount.com/Podcast/Media/dm-4thAge-093.mp3">Download this Episode now</a></strong></div><img src="http://feeds.feedburner.com/~r/4thAge/~4/907ZXdP7xH4" height="1" width="1"/>

It wasn’t long after Brandon Sanderson had agreed to finish Jim’s (aka Robert Jordan's) work that he made it clear that he wanted his name to fall under Robert Jordan on the book. His wish was even more proof to me that Brandon was the right man for the monumental task. I offered that with the by-line we might also insert a Robert Jordan autograph. Brandon agreed.   So began the search through my Robert Jordan signatures for the perfect copy that I could scan and email to TOR. Michelle Horn, a coworker of many years, and fan girl long before that suggested that she had just the book.   In the early 2000s, I was visiting in Charleston, the Two Rivers. Jim and I were in his office late in the afternoon. I recalled that Michelle didn’t have a signed copy of The Eye of the World or any other of Jim’s works for that matter. I asked Jim if he could sign one for her. He took a copy off his writing desk and signed "For Michelle Horn, Best Wishes, Robert Jordan." All these years later, Michelle handed me her cherished book to see if the autograph would work. It was perfect. Then, the significance of that signature hit me: it was in the first book, it was from Jim’s collection, it was signed on his writing desk, and I was privileged to watch him do it. Still, the best laid plans can and will go awry. In the whirlwind of events to get The Gathering Storm to press, a file copy was accidentally substituted for the signature I sent. It’s a great example of Jim’s strong signature, but carries no real personal connection. With the help of Harriet and Paul Stevens at TOR that error is now corrected. What was will be. The Wheel turns and the signature that is in the first will be in the last.   Wilson Brother/Cousin 4th of 3.

The Wheel of Time Frequently Asked Questions, or "WOTFAQ" for short, has just been updated. This document was originally started in 1993 by Erica Sadun to document WoT discussion that had taken place at rec.arts.sf.written.robert-jordan, a Wheel of Time newsgroup and probably the first place fans were discussing this series online. Over the years, the series and the discussions grew, and the FAQ did as well. It changed hands several times, finally ending in the hands of Leigh Butler.   Unfortunately, after her last update in 2004, Leigh was no longer able to maintain the FAQ, though it still remained online in several places. In early 2009, Leigh agreed to pass control of the WOTFAQ to Dragonmount. Jennifer Liang (that's me!) agreed to take it on as a project when she retired as an active member of Dragonmount's community staff.   Since the last update, three new Wheel of Time books have come out (New Spring, Knife of Dreams, The Gathering Storm), Robert Jordan started a blog, become seriously ill, and passed away, and Brandon Sanderson was chosen to complete it. Additionally, a lot has changed with the internet and how we use it.   Here are some notes on how to navigate the WOTFAQ:   The FAQ is divided into thematic sections. Section "Zero" is meta-content about the series, it's authors and it's publishing. Section One is about everything that touches on the Shadow, divided into subsections. Section Two is everything else, divided into subsections. Section Three is discussion of Jordan's historical and mythological inspirations, divided into subsections. Section Four is a discussion of prophecies and Foretellings, divided into subsections. Because of the large amount of material this version of the WOTFAQ had to update, those two sections are not current. Then there is a big skip to Section Ninety-Nine, which contains information about the publication history of the series. The reason for the off numbering is so that additional sections can be added (which is very likely in the next update), but still keeping this section last.   Many articles cover very old discussions from the early days of the series. Others are new discussions. An article that has new information added has "Updated" in in the title. One that was heavily re-written will be marked as "Revised." Articles that are entirely new to this version of the FAQ are marked "New".   The WOTFAQ is not meant to be comprehensive. This means there is a good chance your pet theory isn't included (unless of course your pet theory is shared by many).   The WOTFAQ does not have spoilers for Towers of Midnight. Yes, we know that means some articles are incorrect now. Deal with it.   Aside from fixing typos and other mistakes, the next update of the WOTFAQ is planned for 2011, before the publication of A MEMORY OF LIGHT.   Got all that? Good. You may read now. http://wotfaq.dragonmount.com/

My Interview With Brandon Sanderson

Chapter 2 of Towers of Midnight Now Available in Audio Form

Three weeks ago we announced that we were taking applications for "Tower Guard" for the upcoming TOWERS OF MIDNIGHT signing tour. Like last year's Storm Leaders, these are volunteers that will assist Brandon and Harriet at each signing event. You might see them taking photos, writing notes for an official report or handing out some really cool Wheel of Time swag.   In total, we received 324 applications for 56 positions in eight cities, the most coming in for Provo, Utah's midnight release event. So if you didn't get chosen, don't feel bad. You're in good company. If you weren't chosen this year, please try again when A MEMORY OF LIGHT is released.   Here are the first names and last initials of everyone selected this year.   Note: There are some extra names on some lists. These are people who have made extraordinary contributions to the fandom and have been added to the list by request. They did not take a spot away from another Tower Guard. Provo, UT Midnight Release Lauren R Andrew L Casey C Riley R Spencer P Mark S Matt H Jennifer L     Sacramento, CA Ken B David D Baily E Cody W Elizabeth B Matthew L Virginia O Jason D   Cincinnati, OH Rose K Leah J Lynn M Kathy E Mark A Marvin K   Dallas, TX Shannon A Chuck G Chris T Charles M Sarah B Manar H John S Bob K   Hanover, MD David D Melody S Eric M Maureen S Renee F Robert M Cassy E   Bailey's Crossroads, VA Steve M April D Bill G Benjamin T Matthew M Greg L   Boston, MA Dennis H Rick D Helane D Andrea K Venkat R Bob D   NYC Zeshan H Joseph A Erin M Raphael K Christian G Thomas D Leigh B   Thanks again to everyone who applied this year. And we wish the best of luck to anyone who wants to apply for the next one.

Towers of Midnight book trailer: Behind the scenes