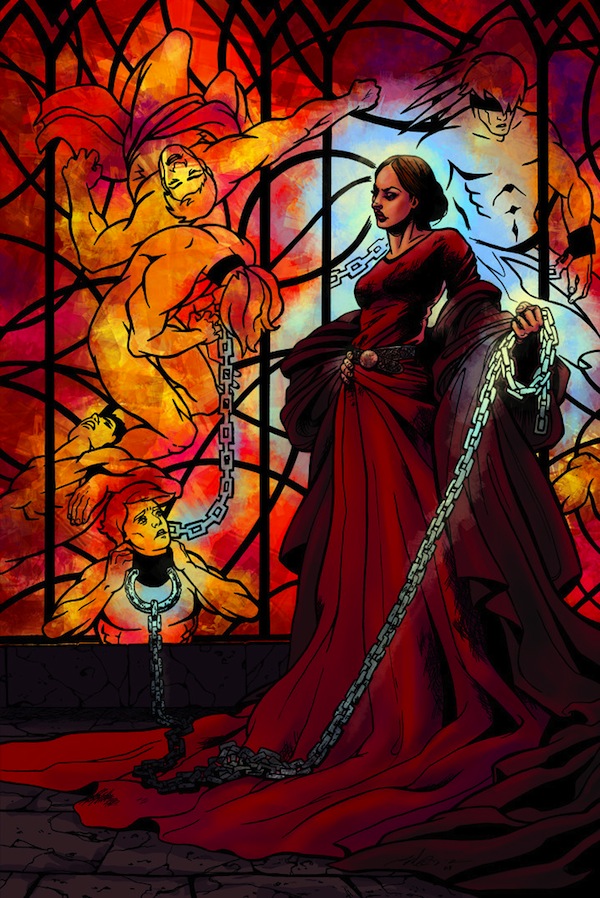 Physical and mental bonds are a recurring theme in The Wheel of Time. This week, the Fan Art Friday spotlight is on the four types of bonds that shape destiny in the world of the Wheel.

These bonds may be entirely physical, but they have a powerful mental effect on the imprisoned. Perhaps the greatest example of this is the subjugation of the marath'damane by the Seanchan, which (especially in Egwene's case) may yet impact the world in ways we haven't even foreseen. For better or worse, imprisonment plays an essential role in the personal development of many of the characters. Egwene's imprisonment in the White Tower was essential to her development as Amyrlin and the mending of the rifts between the Aes Sedai factions, Rand's imprisonment in the events leading to the Battle of Dumai's Wells didn't do his sanity any favors and most certainly precipitated his trust issues, and Faile's kidnapping at the hands of the Shaido Aiel forced Perrin to accept command. Then, of course, there is the most famous prison of all--the Dark One's prison in Shayol Ghul, where He was "bound at the moment of Creation."

Above: Red Ajah by ~leilasedai

Below: Defeat in the Stone Stand by *faile35 (Jeff Fairbourn)

Many of the oaths sworn in The Wheel of Time, including oaths of fealty and all those promises Mat always ends up regretting, can be broken at will (albeit at the oath-breaker's peril). Others, such as treaties made with the Snakes and Foxes in the Chamber of Bonds, oaths sworn on the Oath Rod, and the oaths sworn by Darkfriends, are virtually inescapable. These bonds exact a terrible price.

Above: Son of Battles by ~aiconx (Amanda Elm)

Below: Seanchan Propaganda Poster by ~minniearts

Love, friendship, and fealty take on a whole new meaning in a world with Warders and Aes Sedai, first-sisters, and Compulsion. For me, the most interesting person-to-person bonds in the series are those between Rand and Moridin and those between Rand, Mat, and Perrin. In the case of the three ta'veren, they are not only bound together mentally (as evidenced by the flashes of color they see when they think of each other) but are also bound together physically, as threads in the Pattern.

Above: WoT: Hold over Caemlyn (Rahvin and Morgase) by *Rakiah

Most of the heroes in the world of the Wheel are reluctant heroes, and most of the series concerns each character's struggle to accept his or her fate. Eventually, though, even Mat realizes some things are just meant to be.

Below: One Seanchan to go, please ... by Forbis