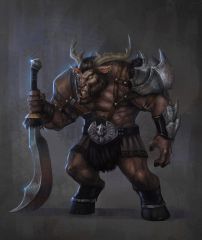 Trollocs. Fades. Draghkar. Myrddraal. Twisted Ones. Neverborn. The Shadowspawn have names that differ from region to region. They were created by Aginor during the Age of Legends for the fight against the forces of Light. They are the forces of the Dark One whose numbers are so large that the forces of Light cannot compare. They were formed from twisting humans and animals with the True Power.

Every fantasy needs the kinds of creatures it can throw against the good guys (and not mind dozens of them being killed in the process). The Wheel of Time has the Shadowspawn. The Shadowspawn are a varied bunch, including Trollocs, Fades, Draghkar, and gholam.

These creatures have been fascinating for me (or I just chose this topic because I call my brother a Trolloc).

Now, without further ado, I present to you the Shadowspawn.

I suppose my teachers could count as Shadowspawn, but I cannot post pictures of them here since they are not from the Wheel of Time series.

That's all for today!

(Artworks have been used with permission.)