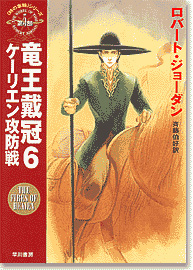 This week Fan Art Friday we're going to deviate a little bit from strictly fan art and show off some pieces from the Japanese translations of The Wheel of Time. We are, of course, very saddened by the recent earthquake in Sendai and tsunami that affected the Pacific Rim. We hope that any Japanese fans out there reading this are safe and know where their loved ones are.

For those who aren't aware, the entire series has been translated into Japanese and published with new covers and interior art by Toshiaki Katou. As is common with translated books, each one has been split into several smaller volumes. The Japanese editions average between four to five volumes per book. The official website for the Japanese editions is hosted by Japan Contents.

This is from the second volume of The Eye of the World. It's Moiraine and Lan, looking spooky and foreboding. I'm sorry that we don't have a better resolution scan of this. The detail on these pieces is incredible.

This is from the second part of The Dragon Reborn. Nynaeve is pretty easy to pick out with her braid, but did you notice that Elayne is rising out of a lily? And her personal sigil is a golden lily? Like I said, attention to detail. I don't know what those feathers around Egwene are supposed to be though.

Rand, from towards the end of A Crown of Swords. If I was a guy, I'd totally use this as my forum avatar. FEAR ME!

And finally, Moghedian, the Spider. Chilling, huh? Too bad she's such a wussy Forsaken.

To see more Japanese covers check out our recently upgraded Art Gallery. And if you'd like to donate money to help fund relief efforts in Japan or the Pacific, the White Tower Social Group has helpfully collected some links.

Or you can donate via text message: