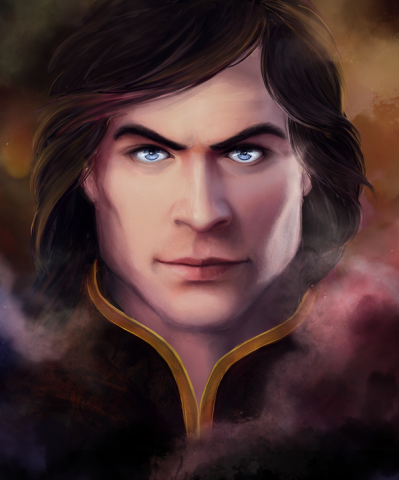 It's Friday, and that means Fan Art!

You might notice it's a new person writing this blog... I'm Misheru, or Mish as most people call me, and I'll be your resident fan art blogger from now on! I'm in my mid twenties, from Norway, and here on Dragonmount I'm an avid mafia player, and I tend to hang out in the White Tower Social Group, where I'm a member of the Green Ajah. I love Wheel of Time (d'uh!) and my absolute favorite thing to geek out about, is the fashion and clothing. I love how detailed Robert Jordan was in making each country and culture have such distinctly different styles, and it's something I'll explore a bit with you guys.

I thought I would kick this off with showing you some of my own personal favorite pieces of fan art!

Well here comes the fashion-geek straight out of the box! Andor is heavily influenced by Tudor-era England, and the clothing in this painting is a strong nod to that. I really like how Elayne both looks regal and capable, while still looking like a young woman. It looks like a royal portrait commissioned to hang in the halls of a grand castle. To me, the placing of the hands look a little like she's used to holding a sword, which is a fine nod to Elayne being of the Green Ajah, and being ready to be a general and leader in Tarmon Gai'don.

The artist says in the description she's hoping to make a series of character portraits, I do hope so, I'd love to see more from her!

The artist said this is a commission from her boyfriend. I really like the colors, the ambiance and the format of the picture. The slightly cartoon-ish proportions fit Mat very well. It's got all the things a Mat portrait should include; the hat, the dice, the asharandei. The red hand-symbol gives the image a powerful contrast; the painting itself is very serene, but the hand reminds us that it's rarely Mat gets a serene, quiet moment... And makes him look like he's ready to leap into action even though he's just sitting there lounging right now.

I can't post my favorites without including an image of Moiraine, since she is my all time favorite character. I think this depiction by tinazz is fantastic! The border and patterned background remind me of Cairhien (the pattern on the border looks like a strong nod to the rising sun of Cairhien, no?). The composition with the flowing cape gives the image a sense of drama and action. Her face is great; a perfect representation of the Aes Sedai "ageless" look. I do find it a bit funny that her hand is making the gesture that is described as the Seanchan gesture of warding off evil.

The Flame of Tar Valon, by jieroque

You can say what you will about Egwene--love her, hate her--but you can't argue that this painting is amazing. It's so strong, and depicting one of the most exciting scenes in the books, in my personal opinion. It's a strong and fierce composition, the dynamic pose, the debris flying in the air, the lightning bolt, and the raken plummeting towards the ground in the background. The artist has chosen to use a rather limited color palette, which enhances the dramatic feeling. Lovely!

....Hmmm? Oh, right, you're probably waiting for some commentary from me. I got temporarily distracted by those eyes... *clears throat* Anyway! The painting style is amazing; by far my favorite depiction of any of the Forsaken. The background with it's dark colors and smoke gives it a suitable menacing ambiance, and the facial expression is strong, a bit arrogant, and I at least see a bit of his insanity. I'm just waiting for the saa to swim over his eyes. I'd love to see the artist do a similar portrait of Rand; she has a portrait of rand but I'd love to see a "twin" of this portrait here, same composition and crop, with Rand's face. I think it's so interesting that Moridin doesn't look downright evil here; the artist has managed to capture that duality that makes Moridin so interesting.

So, that's some of my all-time favorites! Which one do you like the best of them?