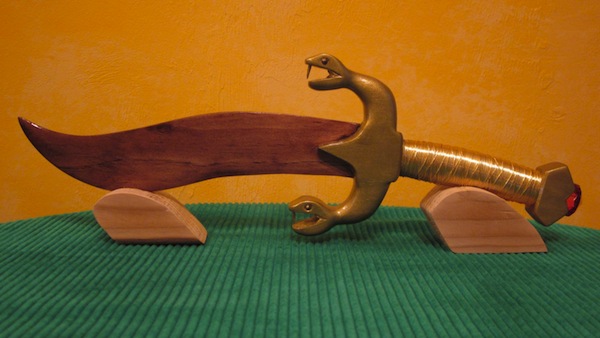 The world of the Wheel is as much defined by objects, symbols, and clothing as it is by characters. Unfortunately for you all, I'm a pretty poor craftsman. This inability to create decent crafts has convinced me that I probably can't tell good crafts from bad crafts, and that I probably shouldn't try. So, I've been avoiding them.

This week, I hope to fix that. My goal today is to show the best of the best--craftsmanship so lovely that even I couldn't mistake it for anything other than the product of exceptional talent and painstaking effort.

This is a beautifully detailed replica of one of the most interesting objects in Randland, done by a Dragonmount member with (if I do say so myself) exquisite taste in Internet handles. Check out his Dragonmount gallery for more Wheel of Time woodwork, including Mat's ashandarei!

Oh my gosh, it's a giant oil painting of Randland. There is really no limit to the awesomeness and creativity of Wheel of Time fans, is there?

Corella Studios creates amazing 3-D art (including a lot more great Wheel of Time art). It's worth checking out their gallery if you have time. They are currently open for commissions.

This is a stock image. To the best of my knowledge, this means it was created as a reference for other digital artists, traditional artists, and photomanipulators. I think it stands beautifully on its own. (I don't recognize the flag. I think this was inspired by The Wheel of Time, rather than directly adapted from it.)

Wheel of Time--Lily and Boar (Elayne and Gawyn) by ~DreaminBlood

A rare combination (for The Wheel of Time, at least) of beautiful cosplay and beautiful photography.

Okay, I admit it. I'm not sharing this one because the costuming is awesome, even though it is, and I'm not sharing it just because it's a fun crossover. I'm sharing it because this guy looks exactly like the version of Mat in my head. Maybe it's because of his resemblance to versions of Mat drawn by ~Forbis and ~solitarium, which for me have always defined the character. What do you think?

Lanfear: Look to the Stars by ~TnSabregirl

Not being a cosplayer myself, I have not to date paid nearly enough attention to ~TnSabregirl's beautiful costumery. This dress is my favorite of her Wheel of Time costumes. The detail is just incredible.