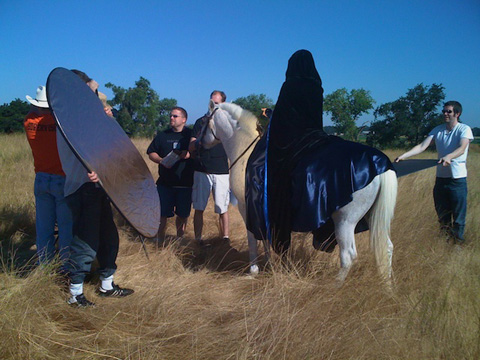 Dragonmount is proud to announce a partnership agreement with Tor books to produce multiple videos to promote A Memory of Light. Building on the success of the Towers of Midnight book trailer, Tor has commissioned us to produce multiple live-action videos for the final Wheel of Time novel.

In addition to these video "trailers", a collection of behind-the-scenes features will be produced, along with other associated media, prize give-aways and fun stuff. The campaign is expected to begin sometime near the end of 2011.

In case you missed it, DM produced a "book trailer" last year for the release of Towers of Midnight. It received strong positive reviews and quickly became Tor's most viewed video ever. You can read all about the making of the video (with video and photos) on our Behind the Scenes page.

A Memory of Light is the fourteenth and final novel in the WoT saga. No official release date has been announced, although it is expected sometime in 2012.

Production for these video will happen over the summer in California. If you're interested in helping with production, please send an email showing your interest with appropriate filmmaking or related skillsets to movies@dragonmount.com.

The Towers of Midnight book trailer: