Episode 5 of The Wheel of Time gives us the sad story of Stepin the Warder while the Two Rivers folk saunter toward a reunion in Tar Valon. SPOILERS through S1E5. 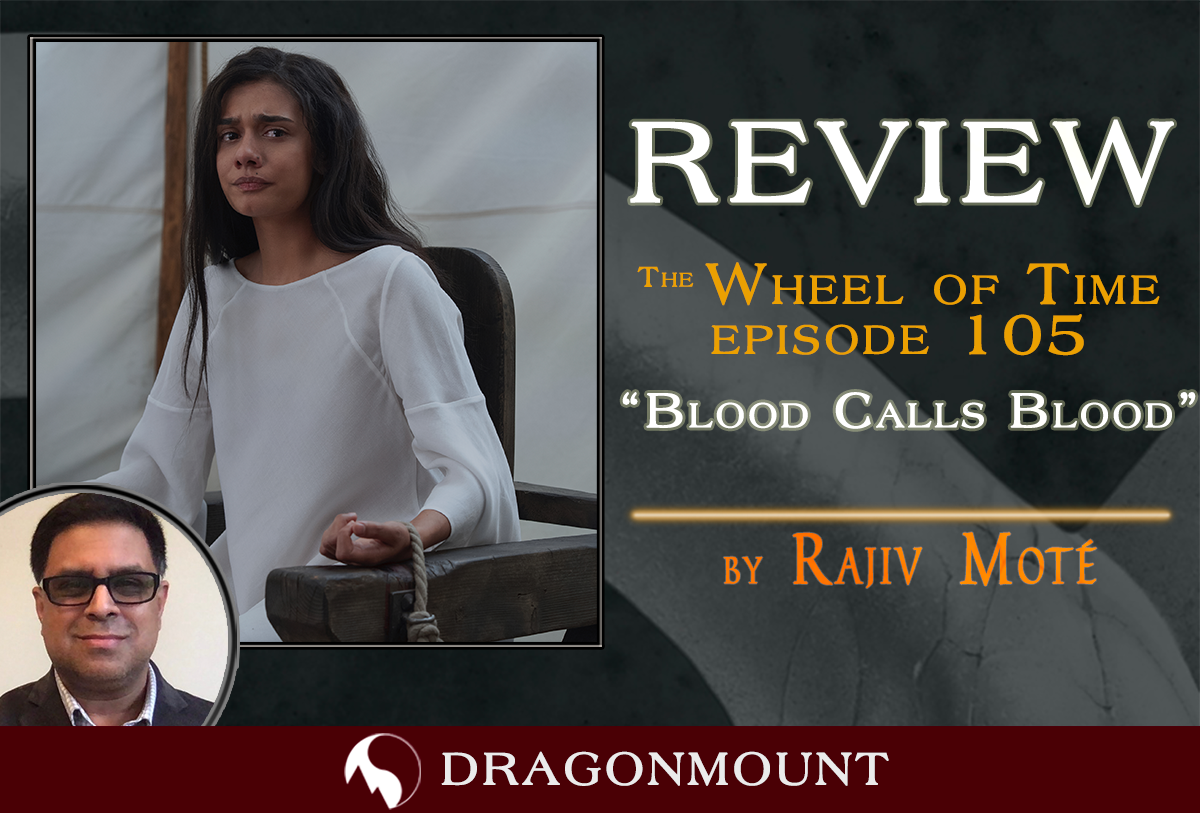 Rajiv Moté is Dragonmount’s book blogger with a lens on the craft of fiction writing. When he’s not directing software engineers, he writes fiction of his own, which can be found catalogued on his website.

Do you love Stepin, the affable, dual axe-wielding Warder of Kerene Sedai, whose easy charm brings smiles around the campfire and who did not appear in any of the books? If you do, I have good news and bad news. If you don’t love Stepin, the news is mostly bad: episode 5, “Blood Calls Blood,” centers around him. And if you love him, well, this episode chronicles his terminal decline and demise. It’s all to a purpose: it shows us that the bond between Warder and Aes Sedai is bone-deep, emotional, and carries consequences. When an Aes Sedai dies, it is as if her Warder “swallows her death.” He falls into a depression. He loses the will to live. These are the stakes of a Warder bond. I sure hope that doesn’t ever happen to someone we know. 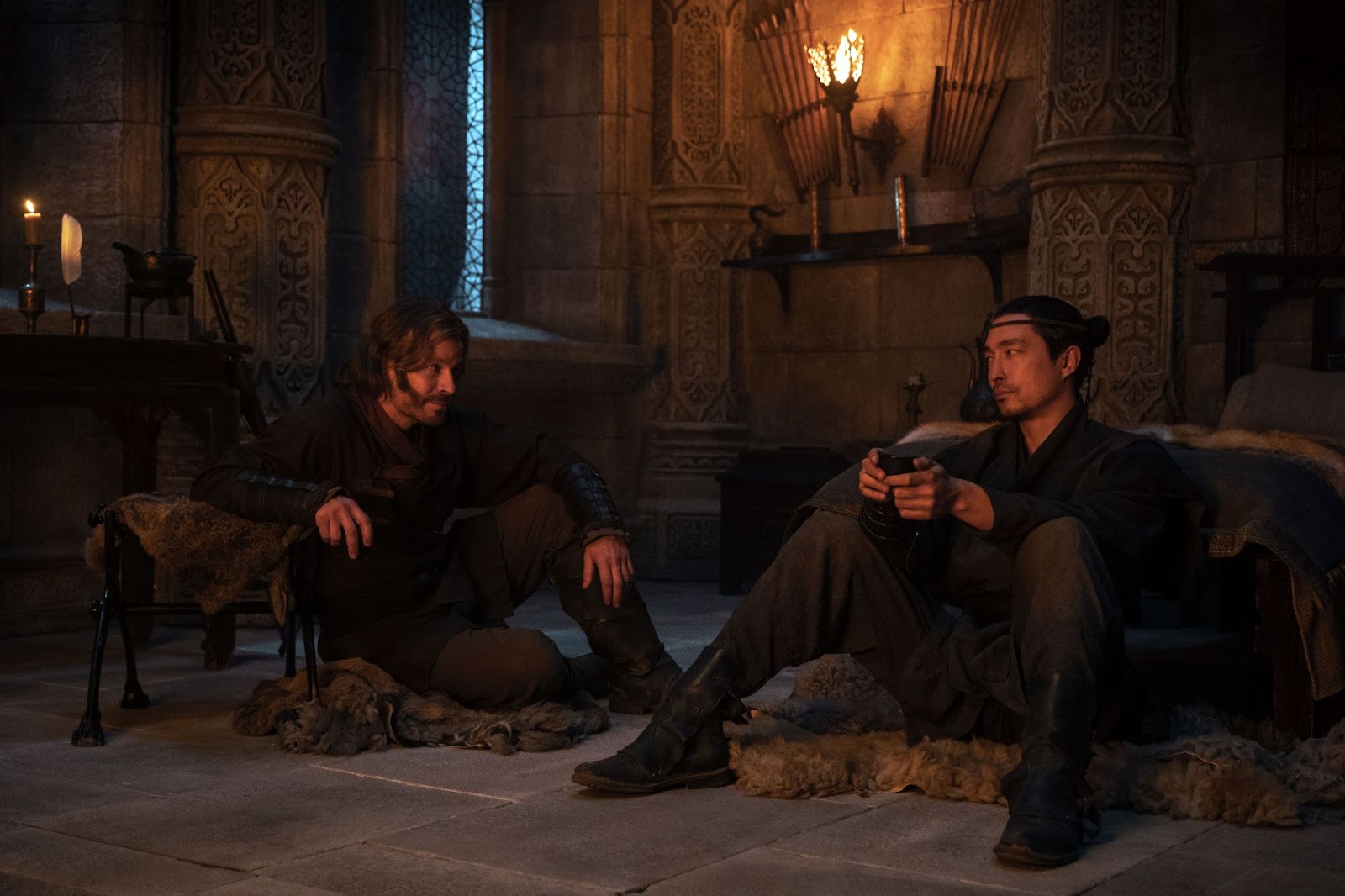 Alanna the Green Aes Sedai plans to bond Stepin herself, as a way of saving his life. Moiraine mentions that she thinks it’s possible to release a Warder from his bond. A little world-building, a little foreshadowing. But alas, Stepin is a clever man. He gets a sleeping powder from Nynaeve, uses it on Lan, and takes the unsupervised moment to commit suicide before the doors of the Hall of the Tower. The Warders hold a throat-singing, chest-thumping funeral, and open, naked grief throws Lan off beat with the thumping. The pain he feels is mirrored in Moiraine’s eyes. The bond cuts both ways.

Daniel Henney is an empathetic, emotive version of Lan Mandragoran, not the stone-faced Warder of the books. It works because Henney’s charisma is of a warmer, emotionally wider sort. It’s easy for audiences to take to him, and to understand why certain characters might do so too. It also works because The Wheel of Time of showrunner Rafe Judkins is deliberately redefining the masculinity of Robert Jordan’s vision. Where the latter’s conception of masculinity was stoic, consumed with duty, and honor-bound, the show imagines men with the emotional room to fret over a daughter’s initiation, pine over a girlfriend growing more distant, and insist on the creature comforts of a hot bath. These men talk to each other about their feelings, swap personal stories, and stay up all night together when one is feeling sad.

Stepin’s tale is a valuable foundation for what may occur later, and Stepin’s history and the camaraderie of the Warders is touching, but this episode feels like a digression. Especially since our protagonists--the scattered Two Rivers folk--are a hair’s breadth from a reunion in Tar Valon. We started the journey because one of them is the Dragon Reborn, hunted by the forces of the Dark One, and requiring the protection of the White Tower. The only trouble is, the White Tower doesn’t seem to be in on the plan, because Moiraine keeps secrets.

Nynaeve is already in the White Tower, hidden away in the Warders quarters by Moiraine to “protect” her from the Red Aes Sedai, Liandrin. We’re given our first look at Aes Sedai politics: when a promising potential student shows up, she is noticed by all, and the Ajahs compete to lure her to their team. Moiraine warns Nynaeve, now that she’s seen how great she is in comparison to those she loves, she will never be the same. That deserved a braid-tug--Nynaeve knows who she is. For her part, Nynaeve has fulfilled her end of her knifepoint bargain with Lan. She kept Moiraine alive, and now she wants assurances that Moiraine will bring the Two Rivers folks to her as soon as her eyes-and-ears locate them. The promise Moiraine gives is not necessarily the promise Nynaeve hears, but Nynaeve isn’t the trusting sort--and Liandrin is happy to drive a wedge into that crack. Unfortunately for Moiraine, all Liandrin has to do is suggest Nynaeve go for a stroll in the Tower garden.

Mat and Rand arrive in Tar Valon, and Rand seems to recognize Dragonmount. Impossible--he has lived all his life in the Two Rivers. He must be thinking of another volcano. In a shock to book readers, Mat thinks they should go straight to the White Tower. But Thom the gleeman had given Rand the name of a trusted inn where they can rest and refresh. (In the world of The Wheel of Time, lying on your bed with your boots on is not just for oafs like Mat--Moiraine does it in this episode, too.) Mat has become dark and troubled in the month since fleeing Shadar Logoth. He snaps at children. He’s sullen and pessimistic. He wonders if he, not the Fade, killed the Grinwell family. He thinks he’s going mad, and he’s terrified of what that could mean. When he and Rand sit on the balcony to watch the Aes Sedai parade the caged, defeated false Dragon Logain into the White Tower, Mat imagines (?) Logain seeing him and laughing wildly. Madly. Does the false Dragon recognize the real Dragon? Or is this a part of the paranoid madness Mat feels seeping into him? 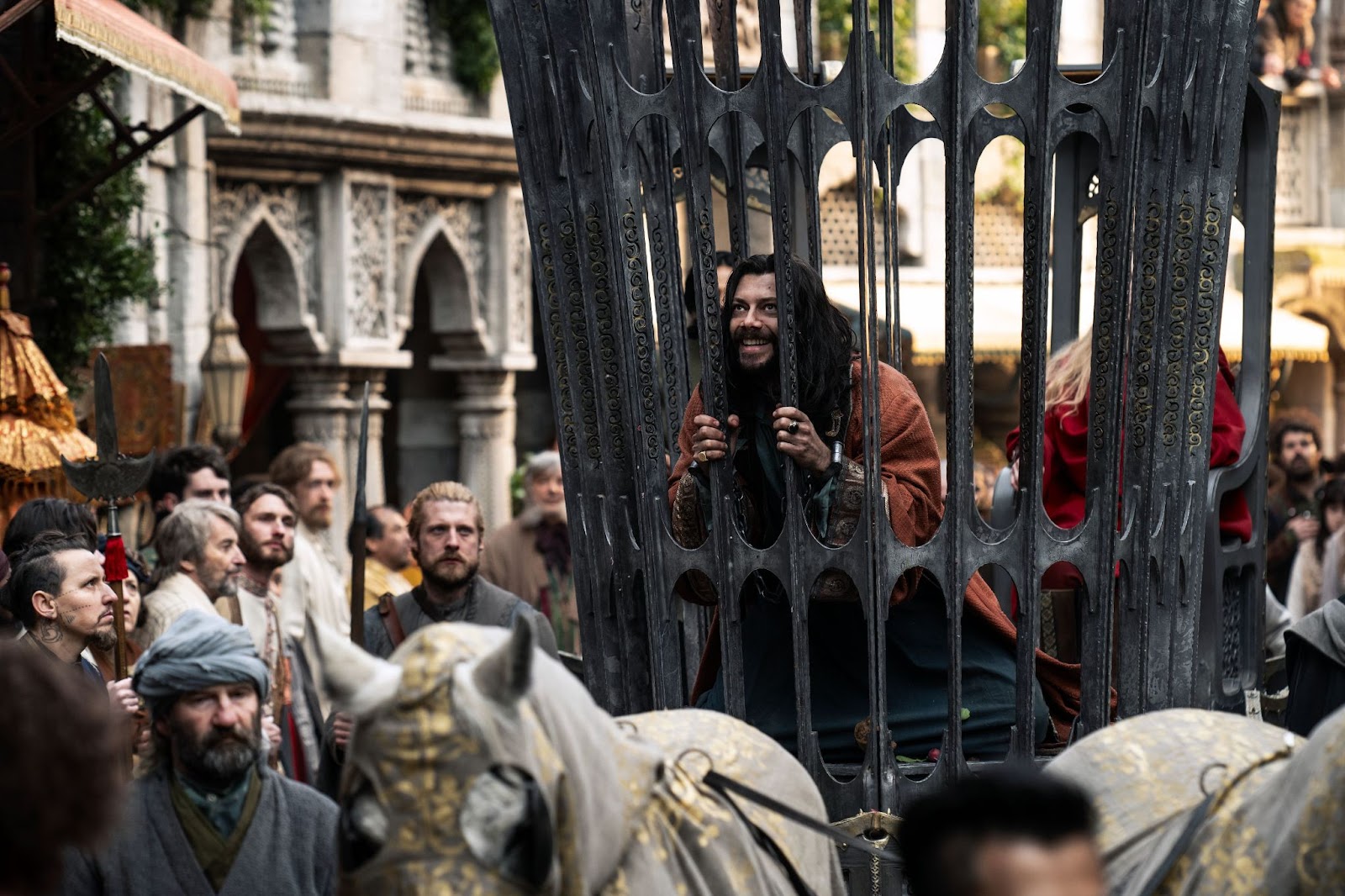 Meanwhile, Rand is bored with Mat’s moping (and apparently incurious about seeing the peddler Padan Fain having a drink in Tar Valon) so he browses books in the library, like the Karaethon Cycle--the Prophecies of the Dragon. There, he meets a new friend, who isn’t put off in the least by Rand’s rudeness. Enter Loial the Ogier--big as a Trolloc, but much more chill. The show has rendered the Ogier with practical effects, and at first, Loial looks like an actor in a costume. My suspension of disbelief kicked in quickly, though, and he became the Ogier--a little less naive, a little more sure than his book counterpart, but still a gentle giant with good manners. Except, of course, when he tells Rand with absolute certainty that his red hair makes him an “Aielman.” At least Thom was discreet about that. I mean, have you seen the royal house of Andor? (No, we have not. In this adaptation, we skipped Caemlyn for Tar Valon.)

Loial’s access to the White Tower grounds, the apparent rarity of braided women, and Liandrin’s seemingly innocuous suggestion to Nynaeve, reunites three of the Two Rivers folk. It becomes immediately clear that Mat is going through something bad when he lashes out at Nynaeve. That, and the dark whispers. Logain was beset by voices, but we heard dark whispering in Shadar Logoth too. Rand and Nynaeve worry about Mat, but they worry about Perrin and Egwene, too. Nynaeve tells Rand a story about how Egwene survived (mysteriously) a childhood infection of the deadly breakbone fever. “Egwene is many things, but above all else, she is unbreakable.”

This is fortunate. Despite the Tinkers’ non-violent attempts to prevent the brutal Whitecloaks from taking Egwene and Perrin, the two end up prisoners of the gleefully villainous Questioner, Child Valda. Ever the gourmet and gourmand, Valda enjoys roast suckling pig as he sets up a deadly dilemma. If Egwene channels the One Power, Valda will kill her and release Perrin. Otherwise, Valda will flay Perrin and release Egwene. 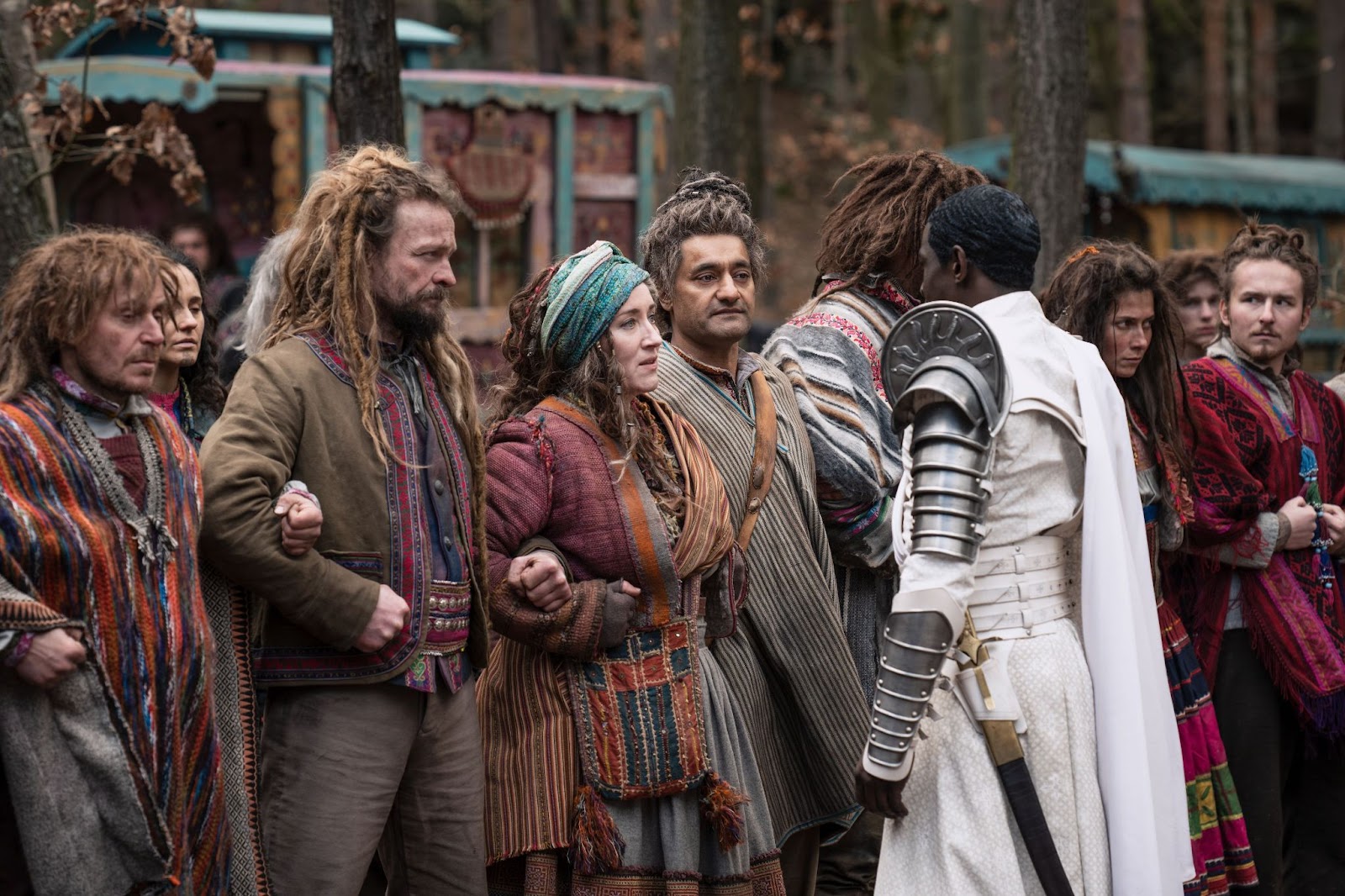 Perrin wants to die. As wolves begin to howl outside, he admits to Egwene that yes, he was directly responsible for his wife Laila’s death. Under Valda’s knife, Perrin’s eyes turn golden. Like a wolf’s. But Egwene won’t allow it. She tosses a feeble fireball at Valda, but manages to singe Perrin’s bonds enough for the big man to snap the ropes and break free.

There are so many ways this scene could have played. Perrin could have gone berserk, like during the Trolloc attack. He could have crouched on all fours and leaped like an animal at Valda. Hell, he could have wolfed out like Michael Jackson in “Thriller.” But instead he only groaned like Frankenstein’s monster and shambled forward--slowly. Valda, who has faced Aes Sedai and was just channeled at, can only stand paralyzed, and gasp “What are you?” Fortunately, Egwene knifes him in the back, ending the whole embarrassing scene. Outside the tent, wolves are savaging the Whitecloaks and Egwene and Perrin slip away.

“Blood Calls Blood” slows down the breathless pace of the first four episodes. Our heroes have fled the Trollocs, survived the dangers of the ruins, wilderness, and the road, and reassembled in Tar Valon. Along the way, Egwene has learned to channel unaided, Nynaeve has lit a beacon fire to her potential power, Perrin has gained the protection of wolves, Mat has found a dagger and started hearing voices, and Rand has discovered a talent for breaking down doors. The plan was to assemble in Tar Valon under the protection of the Aes Sedai sisterhood. That accomplished, the question becomes “now what?” Tar Valon has provided no answers yet. It’s clear that outside of Moiraine and Lan, nobody of the Tower knows about the Dragon Reborn. But the Amyrlin Seat, the leader of the Aes Sedai,  is coming, and presumably she’ll know what to do next. Until then, all we can do is put up our booted feet on the bed and wait.