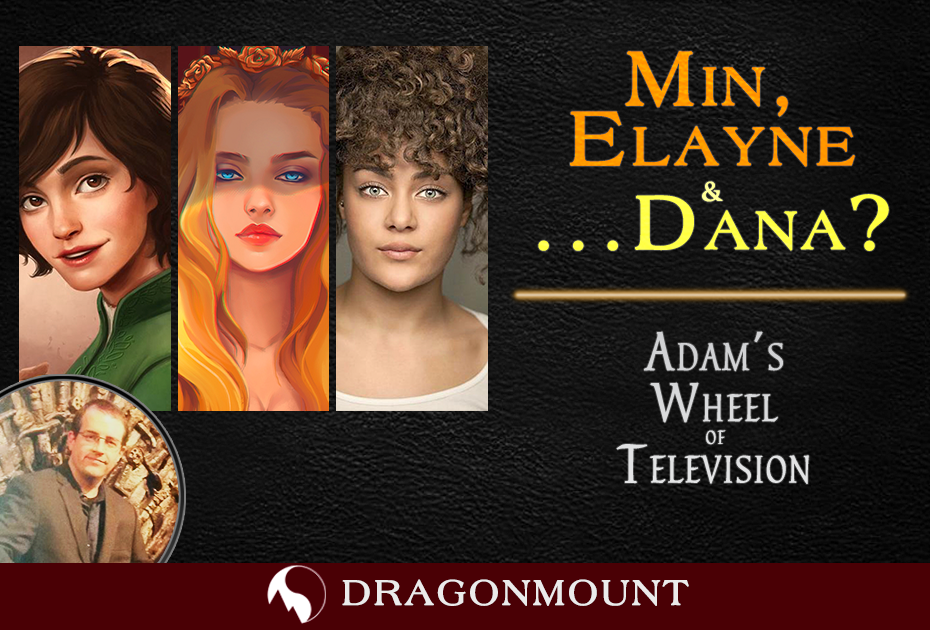 Things have been surprisingly busy since our last check-in, with Amazon revealing multiple new castmembers for the show.

To quickly get up to speed, the new characters announced are as follows:

With the exception of “Dana,” these are all characters well-established in the books, consisting of a sizeable chunk of the Emond’s Field supporting cast, two of the Whitecloaks and two farmers met by Rand and Mat on their journey.

There are two questions that the latest casting announcements encourage: who is Dana and why haven’t we heard anything about Elayne or Min?

There is no Dana, there is Only…?

In the Wheel of Time novels, the name Dana is notable by not actually existing. The closest approximation is “Dena,” the name of a young gleeman whom Thom takes on as a student (and lover) in The Great Hunt. Changing “Dena” to “Dana” seems fairly pointless, but it is possible that they will introduce Dena much earlier in the TV show and perhaps have Thom meet her after he parts ways with Rand and Mat. Keeping Thom’s story on screen saves it disappearing for a large stretch of time (probably well into the second season), which is useful for keeping the actor gainfully employed in the meantime.

It is also possible that the producers have already decided not to feature Dena (a very minor character in the books) and borrowed her name for Else Grinwell. With several “E” names already present in the first season (Egwene, Elayne, presumably Elyas), introducing some name variety is a good idea. It seems a bit silly, but other shows have also done this kind of name-changing on occasion (most famously, turning “Asha Greyjoy” in Game of Thrones into “Yara Greyjoy” because they deemed it too similar to the already-introduced wildling character of Osha). The fact that Dana was announced at the same time as the Grinwells adds credence to that theory, although you’d assume that they’d also have just announced her as “Dana Grinwell” in that case.

There is also the possibility that “Dana” is a codename for another role, ranging from Mili Skane (the last Darkfriend standing, first introduced in The Eye of the World) to the intriguing (if somewhat farfetched) possibility that she is actually “Dana Bornhald,” the genderflipped daughter of Geofram Bornhald. That seems unlikely, but remains a possibility, since Dana and Dain are closely related names.

Another discussion engendered by the announcements is the fate of Elmindreda Farshaw, or “Min,” a fan-favourite character who appears early on in The Eye of the World. Min only has a small role in that book but goes on to have a much bigger role in the rest of the series.

Min first appears in the town of Baerlon. Curiously, we have not heard any casting at all for notable characters in Baerlon (such as Dain Bornhald, despite his father being cast) and the episode titles suggest that if our heroes are stopping in Baerlon at all in the show, it’ll be for a very brief visit (the second episode is called Shadow’s Waiting, suggesting that most or all of the Shadar Logoth storyline will take place in that episode, which limits the time that can be spent in Baerlon). This has led to the speculation that Min has been cut from the first season and will appear in Tar Valon in Season 2, or, more intriguingly, will show up in the Queen’s Blessing Inn instead, working for Basel Gill. The rumour mill suggests that

Gill has also been cast, but we have had no official confirmation from Amazon yet. This latter idea has a lot of promise, since it means that Min and Rand can meet up and spend several days together rather than the comparatively brief meeting in Baerlon.

My strong suspicion is that Min has been cast for Season 1 but not announced yet, and appearing later in the season would explain why the announcement has not yet been made. Of course, it could be that “Dana” is a code name for Min.

Another question is hovering over the fate of the entire family Trakand. The royal family of Andor has a small but key role in The Eye of the World, when Rand’s curiosity gets the better of him and he ends up in an ad hoc royal audience with Queen Morgase and her court. Particularly important in this sequence is that he meets Elayne Trakand, Daughter-Heir of Andor, but many characters critical to the later storylines show up at this point: Gawyn, Galad, Gareth Bryne, Elaida, Morgase, Lini and Martyn Tallanvor.

That’s seven characters with multi-season roles to introduce at once, which is why I’m increasingly sceptical that it will be adapted faithfully. It might make more sense, especially from a budgetary point of view, to skip this scene and introduce Elayne, Gawyn and Galad in Season 2 instead, and potentially Morgase and Gareth as well (Lini and Tallanvor are relatively minor characters who are ripe for the chopping, although I think fans would hate to see Lini and her endless quotes cut from the series). The only problem with this approach is that Elayne and Elaida are such major characters that introducing them as early as possible seems like a much better idea. They could also cut the difference: cut the court scene but introduce Elayne and Elaida via the expanded Logain storyline, as we know there will be new material for Logain relating to his capture in battle and subsequent journey to Caemlyn and Tar Valon (it’s also likely that this is where we will meet Alanna and Liandrin).

These are key questions that will, of course, keep fans guessing until Amazon confirm the full cast for the first season.

As usual, let us know your thoughts in the comments and keep checking in with the Dragonmount TV page for the latest developments.