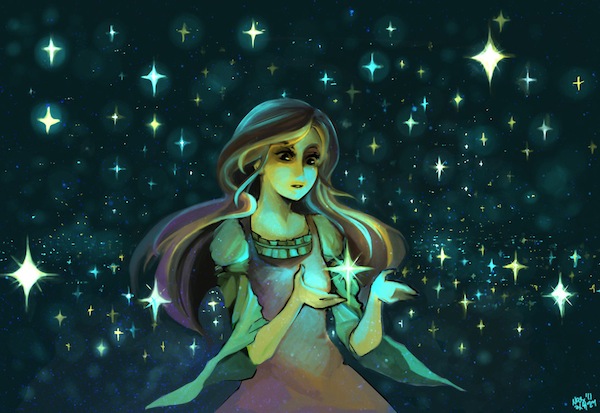 I mentioned in an earlier post that Egwene is one of my favorite characters. Now, I'm well aware that a lot of Wheel of Time fans love to hate on Egwene. And all of you who hate her have a point. Yes, she tends to criticize others and not herself. Yes, she can be entitled and overbearing.

But here's why I love her anyway. In a fantasy setting that sometimes feels a little too black-and-white (compare Robert Jordan's approach to good and evil to the complex morality of George R.R. Martin's A Song of Ice and Fire), Egwene's role as Rand's opposition on the side of the Light is a refreshing twist on an age-old tale.

That's not to say their tense relationship doesn't have grounding in some age-old themes itself. In the ancient symbol of the Aes Sedai, he is the Dragon's Fang and she is the White Flame. Where Rand brings chaos, Egwene brings order. The obvious origin of this symbolism is of course the yin-yang, which symbolizes the interdependence of opposing forces (oh, just go read the wikipedia article).

It's no coincidence that Rand and Egwene develop the ability to channel at approximately the same time, and it's no coincidence that Rand resists his fate with as much passion as Egwene pursues hers. Even though the series is full-to-bursting with characters and events, their relationship is a key thread in the Pattern Robert Jordan wove. It's appropriate, then, that Egwene and Rand are the two characters that get prologues in The Eye of the World--even if Rand (at least, his soul) first appears as the four-hundred-year-old Dragon and Egwene first appears as the nine-year-old water carrier (note that Egwene's prologue was written for the young adult edition released by Starscape Books in 2002).

Egwene and the Raven by Charles Vess

Part of the reason I'm so fond of Egwene is that she goes after her goals with great gusto. Of all the Two Rivers folk, she alone chose their adventure, pursuing it with a bright-eyed innocence that I both admire and pity.

Unlike many of the other characters, she never falters in her convictions. She has a genuine (if occasionally overwrought) love of the One Power and the White Tower, as well as a deep-rooted passion for understanding both.

She and Rand have both suffered manipulation and subjugation. Unlike Rand, however, she has truly thrived in these situations. The path she took to reunite the Tower under her rule (first as the Salidar "puppet," then as Elaida's prisoner) is a perfect example of this.

Above: Egwene in Salidar by ~Snunad (Egwene being raised on a platform of air as she is declared Amyrlin of the Salidar faction, Lord of Chaos Chapter 36, "The Amyrlin is Raised")

Below: WoT Scene by *RoseMuse

Although as readers our immediate response to the tension between Egwene and Rand is to pick a side, I prefer to view their relationship as a tenuous balance. Both the Amyrlin and the Dragon have an essential role to play in the fight against the Shadow.