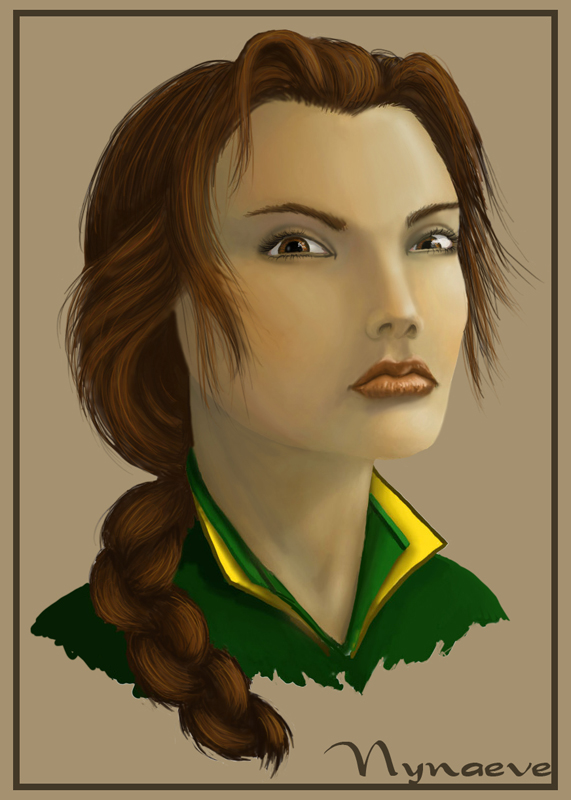 This week on Fan Art Friday, we're looking at Nynaeve al'Meara, one of the main characters of the Wheel of Time series. Nynaeve is a powerful channeler, who grows from ill tempered village Wisdom to ill tempered Aes Sedai and all around bad ass. Nynaeve's character arc is one of the most interesting to me. It ranges from romantic, to funny, to dramatic with everything in between.

RoseMuse agrees with me, looking at her "Stages of Nynaeve". Look at all that stuff she does. For awhile, I was convinced that Nynaeve was the female lead of the series, not Egwene. I still think you can make at an argument for her. Egwene might get to be Amyrlin, but Nynaeve was going toe to toe single handedly back when Egwene was still playing Wise Ones' apprentice. One of Nynaeve's defining physical characteristics is her braid. Not just a fashion statement, the braid is also a barometer of her moods. She tugs it when she's annoyed, and deliberately sets it aside when she's trying to project an aura of calm. This piece is by vild. This is another really nice version of Nynaeve by RainfeatherPearl. Like many Aes Sedai, Nynaeve tends to wear her Ajah color (yellow). But she also favors colors like green, blue and white since those her husband's favorite colors.

Oooh! Check out this great Nynaeve miniture by laundryhamper! I'd love to see a "making of" to go with it. I'm not terribly crafty myself, but I love seeing how folks put together things.

And that's all I've got this week. See you next week!