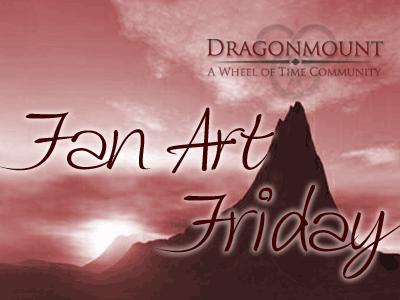 Welcome back to Fan Art Friday! Last week on Twitter we asked for some suggestions for future articles. One of the most popular suggestions was "Landscapes" or illustrations of the places described inthe books. Since I had a computer issues and a tight deadline for school and didn't get this done in time to run last week, this edition will be a little longer than usual. And if you have suggestions for what you'd like to see in this space, be sure to email me: jennifer@dragonmount.com

Probably one of the most popular things to illustrate is the city of Tar Valon. It's such a central place to the series, the heart of the Aes Sedai power and the most beautiful city in the world. I think it's natural that artists would want to depict it. This sketch by rayblasdel also includes some of the White Tower. I like his concept of the Tower being topped with glass, even if it's not accurate to the books. It's a cool visual and it seems like the Aes Sedai would have something wondrous like that in their home. Here's another view of Tar Valon from Gala-maia. One of the interesting features of Tar Valon are the sky bridges. They don't get mentioned much, but it's nice to see them here. Another very popular place in fan art is the Stone of Tear. Here's a great 3D render of the Heart of Stone where Callandor was kept by Lahooligante. I really like the lighting on this one. My friend Art Guy Joedid this 3D model of Caemlyn several years ago. Caemlyn is often considered the second most beautiful city in the world. I think this image really gets across that sense of scale and grandeur you'd expect.

I'd be remiss if I didn't show an image of our namesake. Here's Dragonmount by UidinDragonmount is supposed to be a mountain taller than Everest, that juts out of a rolling plain near Tar Valon. I think this piece really captures that alien feeling, that Dragonmount isn't a truly natural feature of the landscape.

And that's all for today. Feel free to post your favorites in the comments below.