Adam's Wheel of Television: WoT on Prime Updates - May 2020 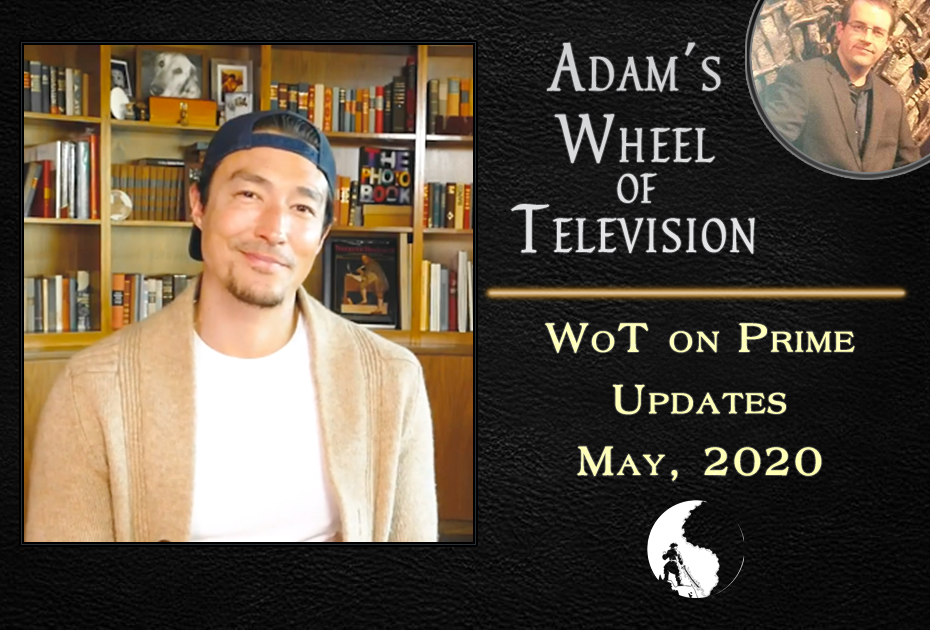 A couple of weeks back, Rafe Judkins dropped in on a virtual JordanCon panel (with Matt Hatch, Shannan Lieb, Daniel Greene, Jennifer Liang and myself) to drop some nuggets of new information about the show. He confirmed that six episodes of the first season – rather than the previously reported four – had completed filming before the lockdown, leaving only two incomplete. Editing and post-production of those six episodes are in progress even during the lockdown. Rafe also confirmed that the show’s first two seasons will consist of eight episodes apiece.

Encouraging news has also come out of the Czech Republic, where The Wheel of Time has been shooting. The Czech Republic enacted a severe lockdown very early in their outbreak of the virus, sealing borders with more adversely-affected countries and reinforcing their health service. As a result, the Republic has seen cases and fatalities both plummet. The country began easing restrictions two weeks ago and there has been no sign of a surge in new cases. As a result, the country’s government has given permission for shooting on various productions to resume, as long as cast and crew subject themselves to several days of isolation and testing after entering the country. The second season of Carnival Row is expected to resume shooting in the next few weeks, and discussions are underway with Marvel and Disney to remount the aborted Prague leg of shooting for The Falcon and Winter Soldier. In the latter case there was only a few days of shooting booked for Prague with most of the remaining shooting to be undertaken on the main sound stages back in Atlanta, Georgia, which so far remains shut down for filming (but likely not for much longer).

Interestingly, The Wheel of Time is apparently not rushing back to filming. About six weeks of shooting were left on the clock for the first season, so more work definitely needed to be done but the current reports suggest that a resumption of filming is further out. This may be a nod to the show’s more international crew, with actors and crew having to return from other countries where pandemic restrictions and lockdowns are still in place. Interestingly, Rosamund Pike (Moiraine) chose to remain in Prague during lockdown and seems raring to get back to work.

Still, the situation is better there than it is for countries still at the peak of their respective outbreaks; the UK, where filming of the second season of The Witcher and the first season of Joss Whedon’s new show, The Nevers, were in full swing, is unlikely to allow production to resume for many more weeks.

In additional news, actor Daniel Henney has hosted one of his online Q&As. He confirmed that he is in the process of reading the books and notes that Lan in the show will retain his commitment to loyalty and duty, elements he finds inspiring. He also noted that he found the sets built for the show to be overwhelming, and the most impressive he’s ever worked with.

Back to Rafe, he recently asked a question on Twitter about how fans think the prologue should be handled. He’s previously confirmed that the first episode will open with Rand and Tam on the Quarry Road, so the prologue is not opening the series, and there have been no signs that it’s been filmed in the first season (no possible casting, so far, for Lews Therin or Ishamael, for example).

It’s likely that the scene will appear eventually as a flashback. My feeling is that the producers want to avoid the problem of other productions where they’ve hired actors for the first season, had a long break before getting back to them and then finding them unavailable, so have had to recast (a repeated bane of casting on Game of Thrones, for example). It may make more sense to hold back until the studio can do a better deal with the actors to lock them in place for a longer stint. That may also feed into how they want to handle Lews Therin’s “voice” in the film, whether it’ll just be a voiceover or maybe a more physical presence, and also whether they want the same actor to play Ishamael/Ba’alazamon and Moridin.