Adam's Wheel of Television: Why We Won't See a Trailer at Comic-Con

We have the cast, we have the crew, we have the logo and we know the show is coming this year, but what about a trailer? When can we expect to see one? 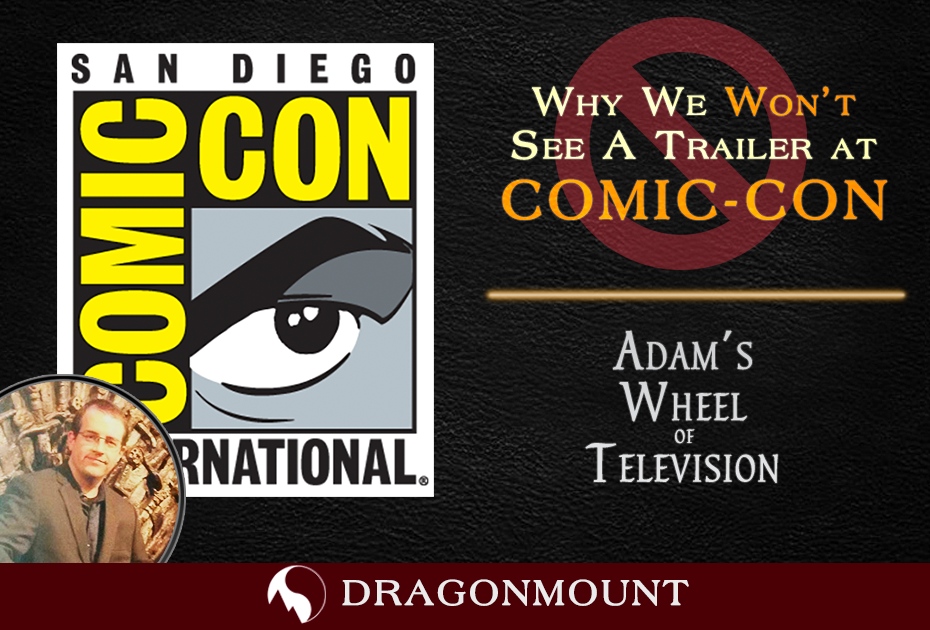 It’s now been confirmed that Amazon’s Wheel of Time TV series is coming in 2021, which means the show should launch in well under six months from now. Excitement is building among the books’ immense global fanbase, but, as discussed previously, Amazon are going to need to get new viewers to watch the show as well. So far all of the teasers, logo reveals and casting information has been aimed at book fans and those already invested rather than complete newcomers to the franchise.

A big moment will come when the show unveils its first, proper trailer for the series. Some are hoping that will come at this year’s virtual Comic-Con event where Wheel of Time showrunner (or “shadowrunner”) Rafe Judkins will be appearing on a panel with several other writers and creatives. This is the only Wheel of Time-related event at Comic-Con currently scheduled. The panel takes place at 11am PT on 23 July.

However, it appears doubtful that this will actually be the case. The panel is a sequential series of relatively brief discussions, first with Judkins and then Evengelion 3.0 showrunner Hideaki Anno, followed by segments on Leverage: Redemption, S.O.Z. Soldiers or Zombies and the I Know What You Did Last Summer reboot. The event is relatively low-key. I think if Amazon were planning a launch for the TV show as soon as September or maybe early October, they’d go all-in with a full (virtual) Comic-Con panel with as much of the cast as possible, a trailer launch and so forth. The fact they are not doing that, in a year when the absence of big-hitters DC and Marvel means they’d get more publicity than normal, is telling.

There’s also been a change at Amazon in how they approach marketing, in contrast to competitors Netflix and HBO. Amazon used to tease shows very early in development, sometimes whilst filming was underway or even before it had begun. The earliest marketing teasers for Good Omens and The Boys aired almost a year before the shows aired, and The Man in the High Castle and The Marvellous Mrs. Maisel both benefited from having their first episodes shot and released separately as pilots before the rest of the season was filmed. However, from Carnival Row onwards, Amazon originals have switched to a much more focused campaigns, described by some in the business as “global saturation marketing campaigns,” or for those familiar with movie Aliens, “nuke the site from orbit, it’s the only way to be sure.” The idea is to not get people to watch at trailer six or twelve months from release and then they forget about it until the week before the show airs, which they might miss (a common Netflix mistake), but instead to bombard audiences and viewers with trailers, teasers and information in a much more concentrated time period, lasting from six to twelve weeks before the release date.

Even with shows where they did show early teasers, Amazon adopted this policy in the lead-up to release with great success (especially for The Boys). Whether Amazon break from this for their vastly more expensive Lord of the Rings show (which appears to have between two and three times Wheel of Time’s already-generous budget, maybe even more), rumoured to launch in the first few months of 2022, is a bigger question.

What that means for The Wheel of Time is that a trailer during Comic-Con is highly unlikely unless they plan to release the show relatively quickly afterwards. We know the show is airing in 2021, so it will start in December at the latest (which Amazon might be trying to avoid, as it will end up going head-to-head with Season 2 of The Witcher), and the recent movements of the publishing dates for the tie-in novels suggest it might start in October or (as long has been rumoured) November. To me that makes a marketing blitz starting in late August or even September is more likely than July.

Hopefully we will get some more information from Rafe’s panel and it’d be great if he could confirm a release date there, but the feeling of myself and the rest of the Dragonmount team is that those hoping for a full-length trailer will likely be disappointed, unless Amazon decide to shift the marketing strategy they have been using for the last three years.

As usual, let us know your thoughts and keep checking our TV news and casting pages for updates.