Wheel of Time showrunner Rafe Judkins hosted an impromptu Q&A yesterday and revealed some key information about the TV series. 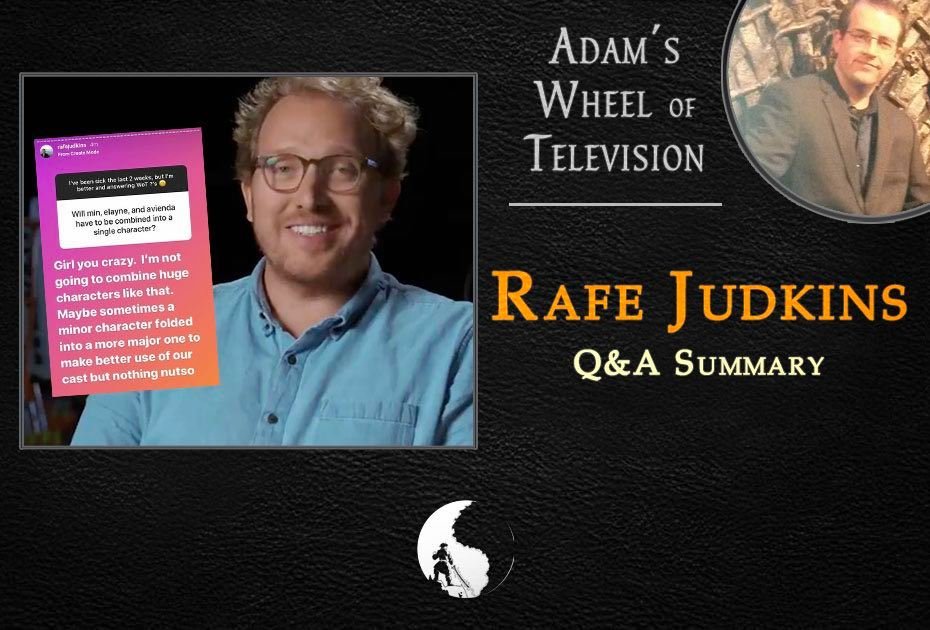 With Wheel of Time production suspended – along with almost every other TV show and film on the planet – I was thinking it might be some time before we got more solid news on the series. However, showrunner Rafe Judkins surprised everyone by hosting a Q&A yesterday on his Instagram feed.

There was a lot of exciting information to learn here, so let’s get to the salient points.

My main takeaway is that, as previously speculated, it should be possible for Amazon to complete the first four episodes even with the shutdown. Whether that means they will transmit them or wait until production can resume and finish the whole season is not known. If the shutdown is likely to persist into 2021, they may decide to air the completed episodes as new content, but if it looks like the pandemic has eased and production can be remounted later this year they may choose to wait until the last four episodes are completed as well.

Obviously, the health and wellbeing of the Wheel of Time cast and crew, and of the residents of the city of Prague and the Czech Republic, is the primary concern at the moment.

A full transcript of the Q&A follows

Which character has your favorite costume so far?

Can we expect a trailer for the show anytime soon?

Rafe: Probably not for a long while sadly.

When will we get more casting announcements to hold us over?

Rafe: I’ll try to get them to put out something soon. A lot of folks in all departments are affected by the state of the world right now though, so I can’t promise a timeline.

Are you using taller actors to portray the Aiel, or camera trickery?

Will [Min], [Elayne], and [Aviendha] have to be combined into a single character?

Rafe: Girl you crazy, I’m not going to combing huge characters like that. Maybe sometimes a minor character folded into a more major one to make better use of our cast but nothing nutso

Do you have a favourite chapter from the whole saga? Mine is Veins of Gold.

Rafe: So many. But Honey in the Tea is one off the top of my head.

How many trollocs do I have to take out to become a writing assistant?

Rafe: Violence is never the answer

RJ writes a lot of internal headspace stuff. What’s 1 hint on how the show will handle that?

Rafe: That’s the biggest difficulty of any novel adaptation. Figuring out how to make the internal monologue come out clearly to the audience. A lot of the changes we make and stories we tell differently are designed to serves exactly that purpose—showing you what those characters internal monologues from the book are without them just saying it out loud in exposition

What are you finding most challenging about going from book to screen?

Rafe: The hardest thing is the physicality of production. In the first book alone they go to more than 20 villages and cities. To try to do that is physically impossible for the show, so most of the work we [do] in the room is geographical, figuring out how to condense the story and move it through places we can physically create.

Yes or no. Have you had to make any cuts be it a scene or chapter, that has been painful for you?

How are you handling sword forms and their names?

Rafe: We have a for real sword master on the show who walks into every room and tests out everything as a weapon. He could most definitely kill me with any item in my office.

What’s been your favorite shooting location so far?

What words of hope would you offer a fan afraid that the show will cut out a lot of content?

Rafe: I genuinely think we are cutting less than most people think. When I see people ask questions like “are you cutting Min?” it blows my mind. I don’t know how you do an adaptation without some of these characters. I think it’ll be more of the smaller stories you’ll miss. We can’t have Rand and [Mat] travel to many many inns on their travels across the countryside for instance. It’s just not producible. So that will be more of what you miss, I think, and the books always exist to read for that ?

Any funny behind the scenes stories?

Rafe: I once walked up to Rosamund’s dummy to say hello and then pretended to check its makeup and told everyone they were doing great work

What would you say the CGI to practical ratio is going to be?

Rafe: Trying to do as much in camera as we possibly can!

Will we have to wait till season 2 to see any Aiel? (Other than Rand)

Rafe: Nope. And the one you see will shock you. Haha. Amazon shouldn’t let me be on here when I’ve been cooped up for a week.

How are the horses on set? Is Mandarb spectacular?

Rafe: They are so great. Honestly I love our horses. Mandarb and Aldieb are downright sexy

Is [Mat] fluent in the old tongue yet?

Rafe: We’ve had a couple cast members speak in it already and they NAILED IT

Will the show be understandable for those who didn’t read the books?

Rafe: That’s the idea. If there are little things they don’t get though, luckily google exists

Similar to Thom performing in an old Inn, what other iconic moments filmed stands out to [you]?

Rafe: Rand and Tam walking through the Westwood

Who is your favorite Aes Sedai in the books? And you can’t say Moiraine/Siuan or the Wonder Girls

Rafe: So many rules. I honestly love all of them though (except Galina that bitch) Alanna, Liandrin and Verin are probably my Top 3. And Siuan! There’s too many I love. Sheriam! Pevara!

Since JordanCon was cancelled, can we maybe get an extra treat next month?

Rafe: Sure! What do you want?

I think [Bela] is such an important character, will the same horse play [Bela] through the series

Rafe: We’ve already had to have two Belas. It turns out a horse for riding on film is not the same as a horse for pulling a cart and SHE MUST DO BOTH

If you were an Aes Sedai, what Ajah would you choose?

Rafe: Such a good question. They all have merits but GREEN for the win. If only to hang with @priyankabose20

Has any post-production work begun or does that not start until filming is completed?

Rafe: Yeah! It would cheer us all up and we have some fun news

How involved, if involved at all, is [Brandon] Sanderson in the writers room?

Rafe: Brandon is hugely helpful. I talked to him before we started Season Two while he was in Prague to get advice and he reads all the scripts and gives notes. He’s incredibly thoughtful and understands the process of adaptation and what’s required from it. I feel so lucky to have him involved. I would have him do more if I could make him!

Will there be a soundtrack? Who’s the composer?

To what extent has Harriet McDougal been involved with the project?

Rafe: She’s a consulting producer so she’s been out to Prague to the sets and reads all the scripts and sends me her notes on them. She and Maria [Simons] are hugely helpful for maintaining the truth of the series and always keep me honest when it comes to things that change too much

Do you read [The Way of Kings] or Mistborn? Please make a tv adaptation for them too

Rafe: Read both. Love both.

Are you going to merge Min and Elayne?

Rafe: You will hear that phrase

Is Lan going to be as much or an absolute stud in the show as he is in the books?

Which WOT book title best describes your self isolation experience?

Rafe: A Memory of Light…

What has been your favorite set so far?

RJ created 1000’s of [characters]. Given that did you feel the need to create new characters?

Rafe: Anyone “new” is inspired by characters in the books or a number of characters combined. If we paid to cast all speaking roles in the book we could only afford to have a radio play

First moment you were speechless on set?

Rafe: First time walking into Emond’s Field with my mom

How is the cast and crew weather the pandemic?

Rafe: Our team in Prague did an amazing job of getting everyone out and keeping them safe. And now everyone’s home and we all live on Instagram.

Should Amazon do a better job of engaging fans love of theory & speculation. [Please] embrace us!!

Rafe: I love theory and speculation! What can they do to better engage you? Send suggestions and I’ll forward them along ?

Blink twice if Min is in season 1.

Do you have a favorite Wise One?

Rafe: I think they’d all say it’s the other

Will Loial portray the Ogier species, or will he be humanized for screen?

How are you planning to handle the visualization of the weaves? Any little tidbits?

Rafe: We are trying to stay as true to the books as possible. I’ve been giving a bunch of VFX folks long diatribes about channeling, weaves, threads, earth vs. air, etc and [the] early stuff has started coming in. It looks FUCKING AWESOME. I screamed when Rosamund started channeling

Will Jeff Probst be one of the Aiel? Can you make some calls?

Rafe: If he dies his hair red ?

Can you please make sure you do a great job? Books are so great

Rafe: This is a really good idea

Is any aspect of the show still in development, or has it all stalled because of the virus?

Rafe: A lot can be done virtually! I’m still doing VFX, editing and the Season Two Virtual Writers Room! And I can do it all in pajamas

Who is your favorite Forsaken??

Rafe: Ahhh. I love the ladies. Greandal, Lanfear, Modhedien. And Ishamael holds a special place in my heart the more time I spend with him

So far, what is your favorite prop in the show?

Rafe: Great Serpent Ring. We all want one.

How has it been to work with your incredibly talented cast? Also… dinner’s ready

Rafe: Okay I have to go eat now. I think I did this right. Next time I’ll use different colors. I don’t know why it was pink and orange the whole time.