Adam's Wheel of Television: How Many Books in Season 1?

As production resumes on Season 1 of The Wheel of Time, a familiar question has reared its head again: how much material from the books will the first season cover? 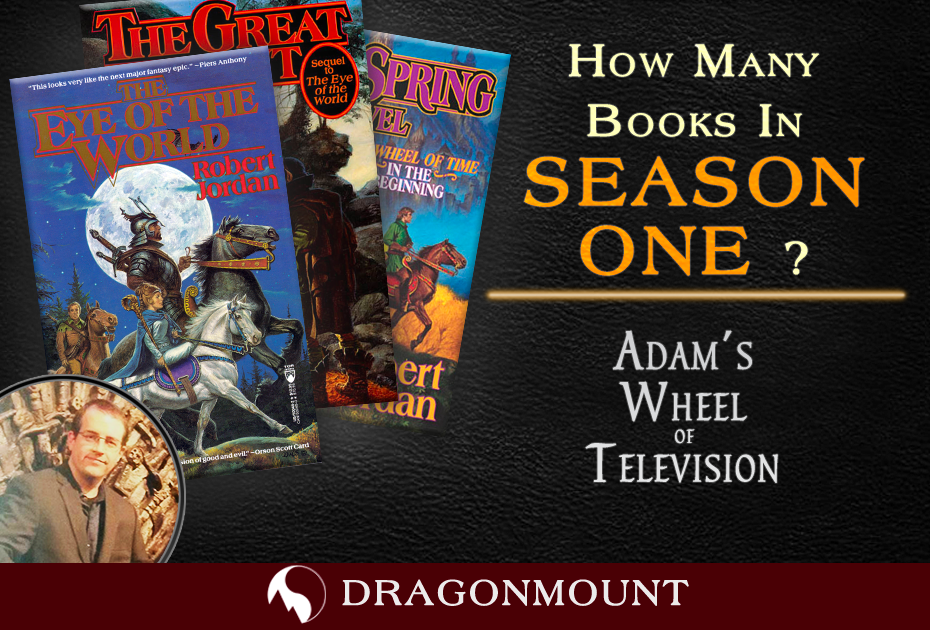 As production resumes on Season 1 of The Wheel of Time, a familiar question has reared its head again: how much material from the books will the first season cover?

This is a key question because The Wheel of Time is, by some measures, the longest work of epic fantasy ever published. The series itself spans fourteen large volumes, a prequel and two companion works. The series is almost 12,000 pages long in paperback, containing more than 4.4 million words (approximately ten times the length of The Lord of the Rings) and taking twenty-three years to publish. Adapting it to a television series which might be lucky to last seven or eight seasons is going to require very extensive changes, far moreso than even the changes required to adapt George R.R. Martin’s A Song of Ice and Fire into its TV equivalent, Game of Thrones; although I suspect Rafe Judkins and his team will at least be very happy that they have a complete story to work from. This question became more challenging once it became clear that Season 1 of The Wheel of Time will only consist of eight episodes, which will almost certainly be the standard one-hour length of most Amazon television series. For contrast, Game of Thrones had ten episodes to adapt the first novel in that series, a novel which is only marginally shorter than The Wheel of Time’s first volume, The Eye of the World. It could be argued that The Eye of the World has a somewhat more relaxed pace and certainly a much smaller cast than A Game of Thrones, with a more linear story which keeps the characters together in the same location for much of its length, so there is scope to depict it more quickly, but even so there are limits on what I think will be possible in terms of compression.

We also know the names of the first six of the eight episodes in the season: Leavetaking, Shadow’s Waiting, A Place of Safety, The Dragon Reborn, Blood Calls Blood and The Flame of Tar Valon. On the basis of the titles alone (and the perceived overall need to fit in two books per season), some have suggested that the show will try to fit The Eye of the World and The Great Hunt into the first season. On this basis, Leavetaking will span most or all of the events of Winternight, our heroes meeting Moiraine, the Trolloc attack and the subsequent flight from the Two Rivers; Shadow’s Waiting will focus on the side-trip to the ruined city of Shadar Logoth; A Place of Safety could refer to Caemlyn and Egwene and Perrin’s adventures with the Tinkers; The Dragon Reborn would feature the events in Fal Dara and the Blight; Blood Calls Blood would feature the events in Fal Dara leading to the theft of the Horn of Valere and The Flame of Tar Valon would introduce the Amyrlin Seat. These all seem like fairly logical extrapolations. In addition, we know several characters have been cast who do not appear until Book 2, most notably Siuan, Leane, Alanna and her Warders, and Liandrin.

However, there are several problems with this interpretation. The first is the casting has been announced roughly in keeping with the table reads for the series. Maria Doyle Kennedy and her fellow actors playing Tinkers were not unveiled until the Episode 5/6 table read, suggesting that the Tinkers will not appear until these episodes. The second is that much of the casting for the show was leaked before it was officially announced, and we have had no indications at all of casting for key Book 2 roles such as Ingtar, Hurin, Suroth, Egeanin, Verin or King Galldrian (although we should also note we have still not had several key Book 1 cast announced yet, most notably Elayne, Galad, Gawyn, Morgase, Elaida, Bayle Domon and Lord Agelmar). We also have a reasonable list of filming locations so far and none of the places involved would seem to reflect key Season 2 locations, such as Falme or Cairhien (indeed, the shooting locations for this week seem more reminiscent of the Blight, or Tarwin's Gap). In addition, Johann Myers who plays Padan Fain has only been booked to appear in one episode of Season 1, with the potential to return for future seasons. I would submit that doing the start of The Great Hunt, let alone all of it, without Padan Fain is untenable. Finally, we know that the Eye of the World material will be supplemented by a new storyline focusing on Logain, his capture and his taking to Tar Valon for trial and gentling, with actor Alvaro Morte booked for multiple episodes of the first season. A rushed Eye of the World, which is only covered in four hours, doesn’t seem like it leaves much room for a major new multi-episode arc focusing on a different set of characters. We also know we are getting flashback scenes to Siuan’s childhood (as an actress has been cast to play Siuan as a young girl) and potentially to the events of New Spring (an Aes Sedai who only appears in New Spring and dies during its events has been cast); fitting in a large amount of new material when they are trying to cram two long, epic books into just eight hours would be very difficult.

Revisiting the episode titles with this knowledge, they can be given different explanations: The Dragon Reborn could focus on the battle against Logain and his capture, whilst in The Flame of Tar Valon he arrives in Tar Valon and is tried and gentled. During this storyline we would meet the Book 2 characters who show up early: Alanna, Siuan, Leane and Liandrin. This would also be a likely explanation for why Eamon Valda has been cast in Season 1. Although oft-mentioned in the first six books, he doesn’t actually appear in-person until Lord of Chaos. However, we do know that he was part of the detachment of the Children of the Light who helped defeat Logain (studiously avoiding all Aes Sedai contact in the process), followed them to Tar Valon via Caemlyn and generally made a nuisance of themselves outside the city. Blood Calls Blood is a trickier one, especially if it’s the same episode the Tinkers first appear in. It may be that the TV show has repurposed the saying from the Prophecies of the Shadow to be more related to the wolfbrother abilities. On the other hand, it might be that the dark prophecies will be quoted and appear earlier on than they do in the books, perhaps in one of the dream sequences that litter the first volume.

The curious issue of pacing is still a valid one. We know from Brandon Sanderson’s set visit that Episode 2 opens with the events in Taren Ferry. Perhaps the action cuts quickly from fleeing Taren Ferry to Shadar Logoth (potentially bypassing Baerlon altogether, with Min’s late casting announcement suggesting she appears somewhere else, perhaps Basel Gill’s inn) based on the episode titles, but that then leaves a fairly yawning chasm between fleeing Shadar Logoth (presumably at the end of Episode 2) to Perrin and Egwene meeting the Tinkers (apparently in Episode 5). One solution I’ve seen theorised is that Episode 2 actually does feature more material related to the flight from the Two Rivers and Shadar Logoth is presented as “a place of safety” they can flee to; the Shadar Logoth events take place in Episode 3 instead and then Episode 4 cuts away mostly to Logain’s story, picking our heroes back up in Episode 5.

A third solution also does raise itself. We’ve been focused very much on Season 1, but we also need to consider the bigger picture of the entire series. It’s extremely unlikely the series will go for much longer than seven or eight seasons in total due to the mounting cost of cast salary renegotiations (the expense of which eventually made even global mega-hits like Game of Thrones and Friends unsustainable at a certain point), so packing in the entire saga as it appears in the books is simply impossible, as that would take more like fourteen seasons. If eight-episode seasons are going to be the norm (as they are for many Amazon projects), Rafe Judkins and his team potentially have less episodes than Game of Thrones did to tell a story more than twice the length in the books. This requires a dramatically different kind of adaptation, one that simply cannot afford to be “faithful” to the text in the same way as Game of Thrones’ early seasons or Peter Jackson’s Lord of the Rings movies. Trying to do that would likely result in the series being left incomplete. Instead, the approach may be to take the entire book series as one whole and then dramatically cut, compress, combine and streamline events into a shorter, more focused narrative, whilst trying to remain true to Robert Jordan’s themes and the general big picture. Taken from this perspective, trying to map which books will appear in which season may be futile, with the showrunners instead conflating storylines, characters and locations in a more dramatic manner than fans are perhaps expecting. On this basis the first season may draw on elements, scenes and characters from several books whilst still trying to achieve the narrative objective of introducing the characters and world and setting up the storyline.

With shooting due to resume in the next couple of weeks, hopefully we’ll get some shots and information from the Episode 7/8 table read which will confirm those episode titles, which should gives us some more information to work with.

As usual, let us know your thoughts and keep an eye on the Dragonmount TV page for more Wheel of Time news.