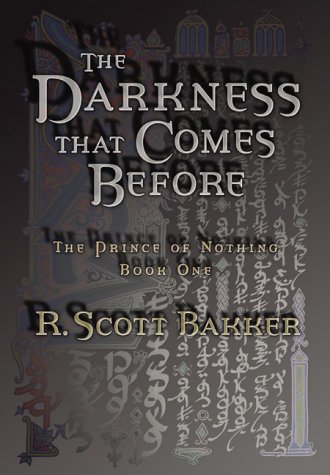 The Prince of Nothing by R. Scott Bakker

This month on Dragonmount's Fantasy Review, I’ll be looking at R. Scott Bakker’s The Prince of Nothing Trilogy, which is the first series in a two part set that will be called The Second Apocalypse. I should probably begin it with a content warning, because this series is much darker and contains much more adult content than the Wheel of Time. There is sex, violence and coarse language in abundance, so with that in mind, let’s continue.

What is the Prince of Nothing series about?

The Prince of Nothing is a story on three levels. The uppermost level deals with the growing Holy War between two major religions, the Inrithi and the Fannim, in the area known as the Three Seas. The political vying of the various kingdoms, empires, religious orders, and magical Schools on the Inrithi side of the conflict, is the tapestry in which the series is laid out. And to the knowledge of most involved, this is the only game being played. The second level involves the machination of the Unholy Consort, who wish to bring about the Second Apocalypse and the return of the No-God, Mog-Pharau, and their opponents, the Mandate School of magic who retain the memories of their founder, Seswatha, who lived through, and fought in, the First Apocalypse.

Into this walks the third level of the story; Anasûrimbor Kellhus, an unknown, and largely unknowable element to those involved. Kellhus is one of the Dûnyain, which are a reclusive monastic society dedicated to the study of logic, rationality and reason. Added to the thousands of years of selective breeding, and the process of training the Dûnyain call ‘conditioning’, this upbringing results in a warrior whose abilities to study, analyse, understand and predict those around him to such an extent that ‘world-born men’, as the Dûnyain name them, become like children before him.

Kellhus enters the Three Seas from the Ancient North, a land devastated in the First Apocalypse, with a purpose—hunting down his father, another Conditioned Dûnyain, presumably to end the threat he poses to the secrecy of the order. Perceiving a weapon in the Holy War, Kellhus sets about a coldly calculated manipulation to usurp it.

Why Do I Suggest This Series to Wheel of Time Fans?

The scope of this series, like the Wheel of Time, is vast, spanning a continent with a multitude of ethnicities, religions and nations, and a history going back thousands of years. As with the Wheel, there is the over-arching theme of good versus evil, though in this context the shades of gray are much... murkier. Bakker uses this set up to explore much deeper themes, much as Jordan was want to do, and like Jordan, he drew heavily on real world events, history and mythology in the construction of his world, granting it a sense of depth and solidity.

I spoke above of the darker, more adult tone, and that is true, but for those who enjoyed the complexity of the Wheel—especially in the nature of character growth and worldbuilding, then there is much to be found in The Prince of Nothing.

Themes, and the Importance of Philosophy

Within the Prince of Nothing Bakker explores the depth of the human condition—from the dangers of the coldly rational mind to the extremes of religious fanaticism, Bakker shows the sordid truth of how history is built—one lie at a time. And yet, even as Kellhus slowly subverts the Holy War, you see him learning, both through his interactions with his teacher, Drusas Achamian, and through philosophical extremes his assumed role within the Holy War take him.

Whilst beautifully written, Bakker’s style does not lend itself to casual reading. Heavily anchored in Bakker’s literary past, the complicated prose is in some ways both the highlight and the major setback in Bakker’s novels. It will take you to the heights of the emotional and metaphysical struggles of the characters—if you stick with it.

The Role of Magic

The only other comparison I would draw is that if you liked the One Power, I suspect you will enjoy the magic of Bakkers world. Not that the two are in anyway similar, but the magic Bakker has woven is a thing of dark philosophical implications, beautifully examined in the relationship between the Mandate Sorcerer, Drusas Achamian, who is at once both the most hopeless and hopeful characters of the series, and Kellhus himself. And in that, it evoked in me a similar sense of fascination as the One Power, and the potent effect it has on its channelers (especially the men).

The Prince of Nothing is a complex and beautifully woven story, and brings to the table far more than a hack and slash battle. It’s themes, it’s character development and the sheer potency of the writing, make it in my opinion, a must read—though that being said the content and the style of the writing could very easily be off putting to some.

You can purchase the first book, The Darkness that Comes Before from Amazon here.