Highlights from Dragon*Con: AN Ending, but Not THE Ending 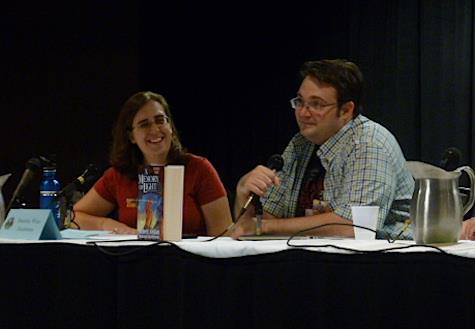 This year marked the end of a dedicated Wheel of Time fan track at Dragon*Con. As we know, this wasn't the ending of Wheel of Time programming at Dragon*Con, but an ending. If there is enough interest from fans, there will be some future Wheel of Time panels in the Sci-Fi & Fantasy Literature track. I will give more information about that at the end of this article. For now, let's celebrate, because we had a blast at Dragon*Con this year! Here are pictures highlighting some of my favorite moments.

Although Friday was filled with great panels and trivia games, things started getting truly insane once the Saturday morning parade began. Since this was the last year of our track, we wanted to go out in style. Check out the swagger on these three ta'veren!

We even made signs! Here's Uno holding one of them:

Our shenanigans on Saturday night began with the raunchy frolic through the books that only tWoTcast can provide. As of this posting, they haven't put up that podcast on their site yet, but watch this space so you don't miss it when they do. The night culminated in one of our best Winespring Inn parties ever. Brandon Sanderson was in a playful mood during this event. When he wasn't being protected from a Lanfear attack by a gallant Asha'man...

...he sang karaoke with us!

Our most popular event was Sunday's preview of A Memory of Light. Brandon treated us to a reading of Chapter 11, followed by a Q&A session. Don't fret if you missed this, because you can read it and watch it online. Some of you know that two of the most well-known Wheel of Time fans have cameos in this chapter. They're none other than track director Jennifer Liang and her husband, James Liang! I loved watching the expressions on Jenn's face as she listened to Brandon read about her character.

People were in high spirits as they headed from the reading to the Wheel of Time costume contest. We had many wonderful entries this year. One of the favorites was Graendal with her "entourage":

Another favorite, and the winner of the contest, was a frighteningly realistic Trolloc. Can you tell that it's really artist Paul Bielaczyc under there?

Monday was bittersweet. We wallowed in nostalgia and told stories about our track through the years. Even though it's sad to say goodbye to the track, we're glad that it's been such a success. Also, remember that this is only an ending. If you have Wheel of Time panel ideas or simply want to support such programming in the future, you can contact the director of the Sci-Fi & Fantasy Literature track, Sue Phillips, at scififantasylit@dragoncon.org.

Before I sign off, I'd like to thank Jennifer Liang for all the blood, sweat, and tears she has put into our Wheel of Time track at Dragon*Con. Without her, we wouldn't have had the track or the fond memories associated with it. Thanks for being awesome, Jenn!