Academy Award-nominated actress Rosamund Pike has been cast as Moiraine Damodred in the upcoming Wheel of Time TV show. 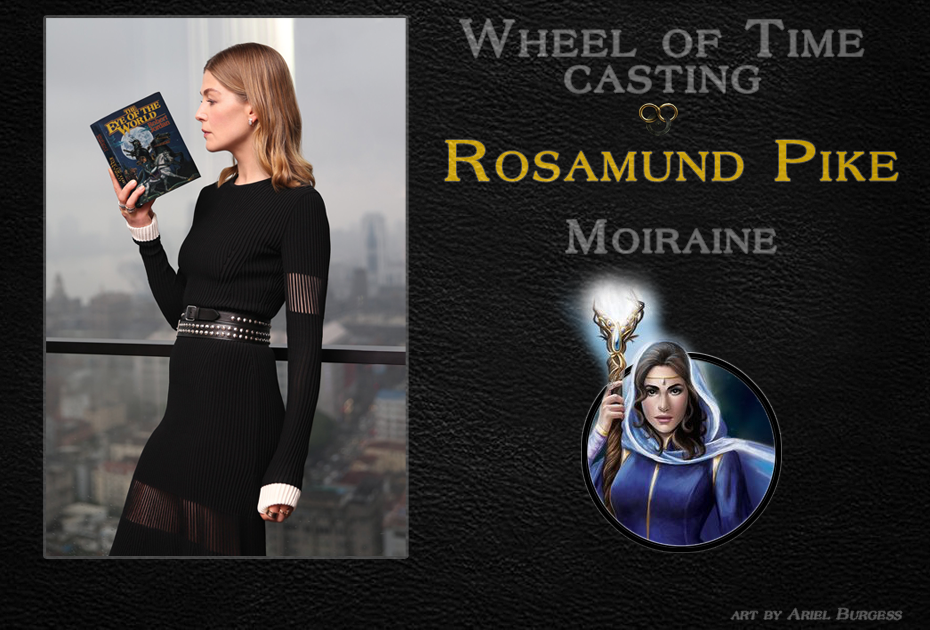 Academy Award-nominated actress Rosamund Pike has been cast as Moiraine Damodred in the upcoming Wheel of Time TV show.  The announcement came today when the official Wheel of Time writer's room Twitter account shared an image of the actress reading The Eye of the World.

Rafe Judkins, the executive producer on the show, said this on Twitter shortly after the announcement:

...As a fan, my conversations with Rosamund about who Moiraine is, where she comes from, what drives her, have been genuinely one of the great privileges of my career. She understands this character in her bones and I get chills thinking about the day she’ll bring her to life.
...
After one conversation with her I knew it was the only option.

Pike is a well-known actress with significant credits to her name that showcase her amazing range. Some of her notable roles include the lead in Gone Girl, and the James Bond film, Die Another Day. She has the right blend of strength and confidence to carry this essential role in the series. Amazon Studios, the studio that will be airing the show, said with their first official press release that the Wheel of TimeTV show would feature Moiraine's character prominently. Pike will also be credited as a producer on the show.

In the books, Moiraine has an important role as a mentor and guide. She's the Aes Sedai who finds a handful of young characters, one of whom may potentially turn out to be the prophesied and greatly-feared Dragon Reborn. Her prominently featured role in the show doesn't necessarily mean she'll be the main character for the series, but it's likely Pike will be one of the major headliners.

Be sure to check out our full summary of everything we know about the forthcoming TV show.