Review of "The Dragon Reborn"

"The Dragon Reborn," Season 1, Episode 4 of the Amazon Prime Video Wheel of Time television show, has some amazing ups and downs as the characters scramble to find out where they fit in the Pattern. 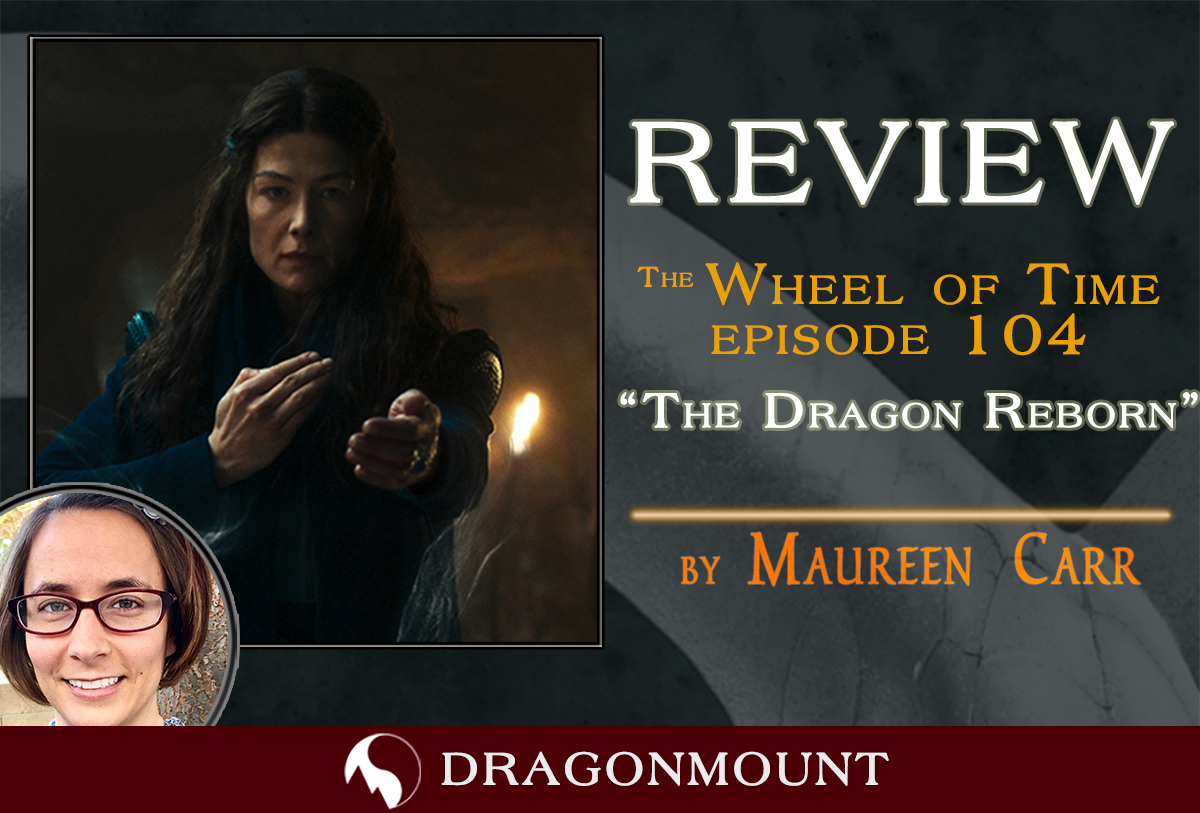 Episode 4 of Amazon Prime Video’s The Wheel of Time television show is aptly named “The Dragon Reborn.”  When the episode titles were announced, I was convinced showrunner Rafe Judkins was racing through The Eye of the World with the first four episodes and wrapping up The Great Hunt with the last four. I am glad my hypothesis was so far from what Judkins delivered.

“The Dragon Reborn” begins with a flashback of Logain Ablar, the self-proclaimed Dragon Reborn, as he ravages the king’s palace in Ghealdan. I love the first view we get of Logain as he comes into focus—similar to Moiraine’s introduction in the first episode.  Logain’s calm and collected, very much in control of the situation.  When the king’s guards attack, we see him channel.  Unlike Moiraine’s wispy flows of the One Power, Logain’s are laced with black.  The show names this the “corruption” of the Dark One rather than the taint, but it is very clearly shown as something sinister and evil.  The sad thing is Logain can’t seem to understand that. The corruption in his weaves take forms and speak to him, tempting him to kill the king.  The madness doesn’t have him so far in its grasp, though, because Logain convinces the king to join his side.

While we know of Logain in book one of the series, it’s incredibly satisfying to see it unfold this early in the television show.  I was expecting Logain to be our main antagonist of Season 1, seeing the Aes Sedai fighting him, viewers wondering if he could be the Dragon.  I feel this could have made some interesting and conflicting emotions when we get to the inevitable gentling and Nynaeve’s accidental Healing.  This is a man we battled for eight episodes and suddenly he’s a threat again!  Once again, the show handled this in a way that was far superior.  Logain’s triumph at the beginning of the episode is contrasted beautifully to his fall at its ending.

His arc was engaging, beautiful, and tragic.  More on this in a bit.

The Perrin and Egwene side quest also differed from the source material.  Elyas Machera was completely cut at this time—though he may show up later—but I’m glad they still met up with the Tuatha’an.  Aram’s charm is quite the same, but the flirting between him and Egwene was removed.  This timeframe is happening much quicker than in the books, so the breakup with Rand is still fresh.  It makes sense for her to hold her feelings in reserve for now.

While Perrin is uncomfortable at first with the idea of the Way of the Leaf, Egwene seems to grasp the core of their beliefs.  Aram scoffs at the idea of a song that brings peace, but one of my favorite lines in this episode is when Egwene looks around the happy, smiling faces in the camp and retorts, “Are you sure you haven’t found it already?”  The music slows and Aram really looks at his companions’s faces.  It’s an amazing scene, so hopeful and uplifting.  I immensely enjoyed every second we shared with the Tinkers.

Rand, Mat, and Thom’s journey gets interesting as Thom casts our suspicions on Mat as a possible Dragon.  For those of us who’ve read the books, the corruption from Shaidar Logoth is apparent.  However, the “corruption” of the One Power is shown in a similar way.  I can see how the connection could be made between Logain’s channeling at the beginning of the episode, and the black bile that comes out of Mat towards the middle.  Rand mostly stays in the background, though it’s interesting that he’s able to defuse the situation with the Grinwells so easily.  Thom would have been my first candidate for reading the signs of Master Grinwell’s posture.  Perhaps this is Rand moving the Pattern more than just a regular ta’veren would?

The buildup of tension between Nynaeve and Lan made up the best pieces of this episode.  Their relationship has been laid out so satisfactorily up to this point.  Lan underestimated her twice—first thinking she couldn’t track him, then dismissing the knife she held to his throat and trying to call her bluff.  She’s surprising him and I like how organically the chemistry between them grows.  When she watches him offer to a prayer for Malkier and the Seven Towers, we see a moment of vulnerability.  She shows him a prayer she says but admits she doesn’t know the meaning.  She stopped saying it because the people of the Two Rivers “don’t go to a Wisdom for ignorance.”  When Lan can give her the translation of her prayer, the emotion is clear on her face.  She’s letting down her walls of hostility and fear.  She’s feeling safe with him.  I’m super upset we didn’t get to hear Lan’s complete thought of how she’s exactly as he expected.  I hope that will come later.

Moiraine is surprising in this episode because she thinks—however briefly—that Logain might be the Dragon.  I love the depth of her character here.  She is able to hear new information, process it, and take the steps needed to find out the truth.  Very reminiscent of a Brown Sister, or maybe a White.  The complexity of her emotions is so engaging and so well done.  I love when she confronts Logain and actually listens to his reasoning.  I really believe she would have followed him if he’d answered the questions correctly.  But alas, Logain is not the Dragon.  His downfall here was so sad.  He’s been shown to be so confident and capable, so seeing the power ripped from him, tears in his eyes, saying with overwhelming awe, “Like a raging sun,” broke my heart.

This whole scene was my favorite of the series so far.  Nynaeve’s moment of vulnerability left her in a state of emotional upheaval.  When Logain’s attack sliced Lan’s throat, Nynaeve understandably snaps.  I’m wondering if she’ll have an anger block like in the books, because it wasn’t anger that made her channel, it was desperation.  Nynaeve has been raised by the old Wisdom to be the Wisdom, who we know can’t marry or have children.  She probably never went through typical adolescent infatuation, or if she did, it may have been one-sided.  Now, here is a man who sees her as she is—strong, fierce, brave, determined—and he flirts right back.  To think she’d lose that after just finding it is devastating.

I’ve cried every time I’ve watched this scene.  There are so many levels of feelings.  The awe for Nynaeve, the sadness for Logain, the sense of loss for Kerene.  This is the most perfect scene and I'm hopeful it will soothe a lot of book-fans.  Yes, there are changes, but they can be equally as awesome.

I cannot wait to see the ramifications of this episode.  How will Mat and Rand get on without Thom?  How far will Egwene and Perrin go with the Tinkers?  What penance will the Aes Sedai pay for gentling Logain outside the Tower?  How will Nynaeve deal with this new Power inside her?

Episode 5, “Blood Calls Blood,” premieres next Friday.  I hope some of our questions are answered.

What was your favorite part of “The Dragon Reborn”?  Let me know in the comments below.