Rajiv's Threads In the Pattern: A Turning of the Wheel

The Amazon Prime Video adaptation of The Wheel of Time is an interpretation, not a translation of the books. And that’s exciting. SPOILERS for the books and the show trailers. 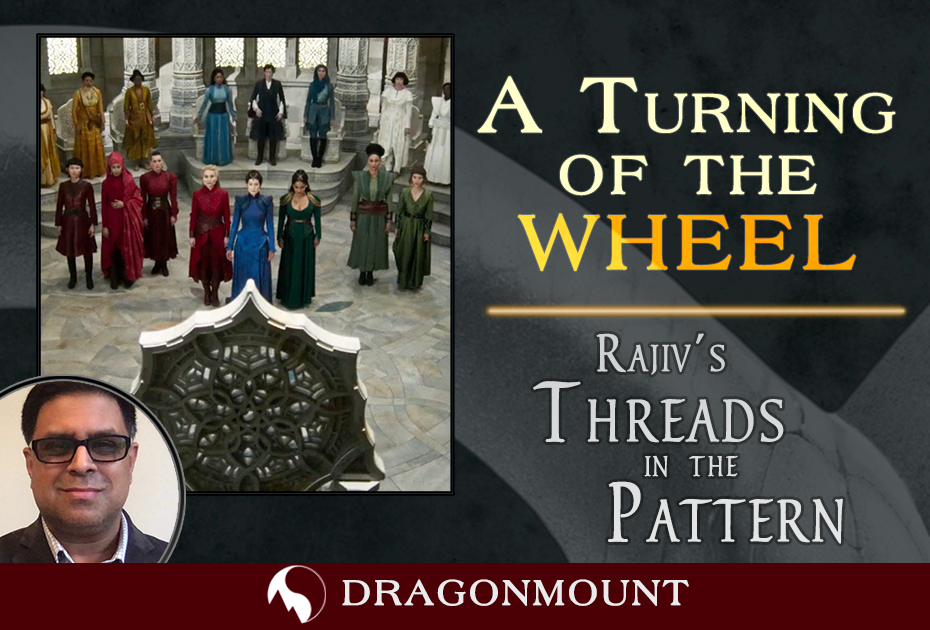 The Wheel of Time turns, and the tapestry it spins across the Ages is not made of identical weaves, but echoing patterns. So it is with adaptations, and Robert Jordan gave us the framework to embrace the differences between the books and Amazon Prime Video’s series. The show is a new turning of the Wheel, a new angle on a 30-year-old saga. Adaptation is interpretation. This is an opportunity for fans to experience The Wheel of Time in a fresh way.

One of the most striking and interesting angles is that this season’s preview trailers [1, 2] center the story on Moiraine Damodred. If you read the books beginning with the prequel, New Spring, it’s easy to see how to frame The Wheel of Time as Moiraine’s story (up to a certain point, of course). She has knowledge that must be held close, and the world’s fate depends on what she does with it. Right away, this does a couple of interesting things. First, it cements the stakes. Moiraine knows the history of the Dark One’s war on humanity and the prophecies of how he can be beaten. We won’t waste time figuring out whether we can trust Moiraine. The world is in danger, and the prophecies must be fulfilled or all is lost. This is essentially the plot of New Spring, and it figures heavily into the second trailer.

Second, centering Moiraine makes the book’s non-mystery of who will stand against and defeat the Dark One into something more complicated--and more in line with the books’ ending. (SPOILERS for the end of The Eye of the World, and for the end of A Memory of Light!) Rand al’Thor is the Dragon Reborn, the reincarnation of Lews Therin Telamon fated to face the Dark One at Shayol Ghul. But The Wheel of Time is not your typical Chosen One story. Min, who sees the Pattern, knew from the first book that winning the Last Battle required the ensemble cast.

“When you’re all in a group? Sparks swirling around you, thousands of them, and a big shadow, darker than midnight. It’s so strong I almost wonder why everybody can’t see it. The sparks are trying to fill the shadow, and the shadow is trying to swallow the sparks… You are all tied together in something dangerous…”

-- “Strangers and Friends,” The Eye of the World

Min’s prophecy is realized during the Last Battle as Rand, facing the Dark One, finally understands that the world’s fate wasn’t only on his shoulders--this conflict involved everyone who struggled, fought, and gave their lives for the Light.

In the books, Moiraine sought a boy of a certain age who could fit the parameters of the Prophecies of the Dragon. Rand, Mat, and Perrin were all candidates, though Rand’s point-of-view in Chapter 1 gave away the mystery. The show’s second preview suggests that Egwene and Nynaeve are under Moiraine’s consideration too. And why not? Min had the right of it: the darkness is held at bay only when they are united. Even in the books, there is no one savior. They all have a major role to play.

Gender essentialism is core to the books, no doubt. Souls are female or male. They channel saidar or saidin--even if they happen to occupy the body of a different sex. In the Wheel’s natural cycle of reincarnation, they are reborn within their soul’s gender. But in this turning of the Wheel, the Dragon Reborn seems to be an equal opportunity role. It’s a change that will have ripple effects. But it’s a reinterpretation of the story that is worth trying. If the show has revised the prophecies to indicate that the world’s savior isn’t necessarily male, it has made the prophecies more accurate. Rand may have confronted the Dark One in Shayol Ghul, but he did so while Egwene, Nynaeve, Elayne, Mat, Perrin, and Logain united and mobilized the rest of the continent as a force for the Light in the Last Battle.

Logain is prominent in the show trailers. It looks like we’ll see the Aes Sedai hunting and capturing the false Dragon, and he doesn’t go down easily. It’s hard to tell if the funeral scenes we see are in the aftermath of this campaign, or a consequence of the Whitecloak witch-burning, but it clear that the show is going to show us the dangers of men channeling instead of us relying on the hearsay of Aes Sedai. From what little we’ve seen, it’s a smart choice. Álvaro Morte is a presence on screen, menacing even behind bars. Expanding his role in the early parts of the story will hammer home why false Dragons are hated and feared, and why many might consider the real Dragon not much of an improvement. I wouldn’t be surprised if, by the time Rafe Judkins adapts Lord of Chaos, the character of Mazrim Taim gets conflated into Morte’s Logain. “Asha’man, KILL!” The visual treatment of saidin, the male half of the One Power, deviates from the book, but is more illustrative. Technically, the Dark One’s Taint (sorry, now it’s “Corruption” to spare us the jokes) lies between the channeler and saidin. The channeler reaches through the Corruption, which floods him along with the Power, but the flows themselves are not attainted. That’s great for internal narration, but when all the audience sees is the channeling, that sinister, black smoke snaking around the flows of Power is a great way to represent corrupted saidin. It also seems visually more in line with how that problem is eventually solved, in Winter’s Heart. There are many other changes we can glean from the trailers. The Emond’s Field Women’s Circle seems to have rituals of initiation. The Aiel will battle Tam’s Illianer Companions in the Blood Snow. Moiraine will take part in Logain’s capture. The Children of the Light will pose an actual, lethal threat to Aes Sedai. Thom will play the guitar. There will be more brown eyes than blue than the books describe. But never once do the images not scream The Wheel of Time. Emond’s Field, Tar Valon, Shadar Logoth, and Fal Dara evoke their printed page counterparts in wide and focused shots.

There’s no doubt the Third Age has come round again. And we'll get to re-experience it for the first time.