Rajiv's Threads In the Pattern: The Chosen One’s Legacy

These days, it's not enough for the Chosen One to defeat the Dark Lord and claim the throne. Our hero must leave the world a better place. Rajiv Moté explores how Rand al'Thor left a legacy for the Fourth Age in The Wheel of Time. (SPOILERS for The Wheel of Time and the end of HBO's Game of Thrones.) 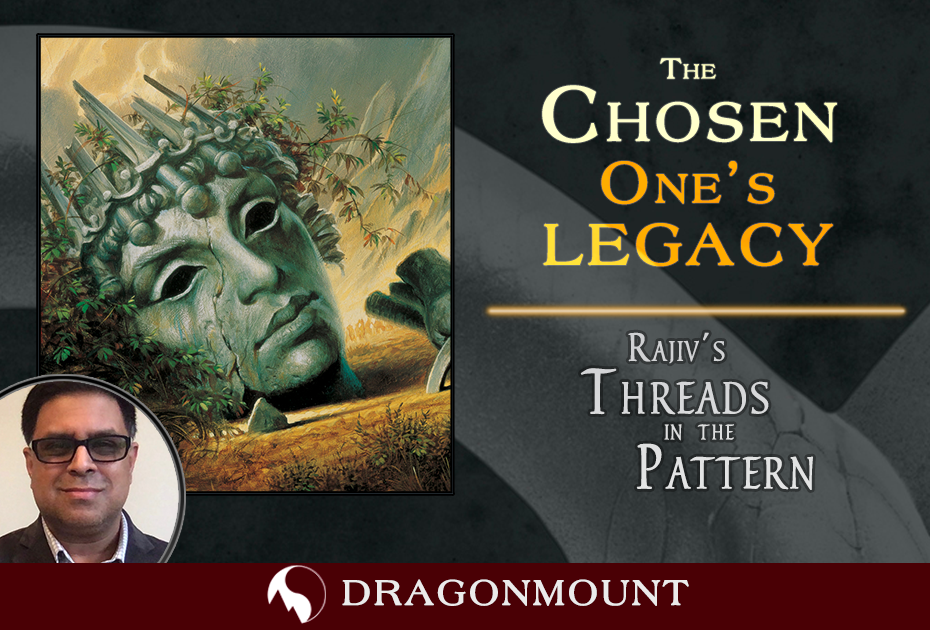 “Well we have to choose someone [to rule].”

“Why just us? We represent the Great Houses, but whomever we choose, they won’t just rule over lords and ladies. Maybe the decision about what’s best for everyone should be left to, well, everyone.”

“Maybe we should give the dogs a vote as well!”

So close. The series finale of HBO’s Game of Thrones could have “broken the wheel” of Houses warring for the Iron Throne with the introduction of representative democracy. But alas, the time had not yet come in Westeros for Samwell Tarley’s radical idea. It seemed like a nod to the audience, who had long speculated what kind of government could arise when the “Game” was over and everybody (knowing George R. R. Martin) had lost. The scene seemed to say, “we hear you, but this isn’t the kind of story that has room to explore how a society moves away from monarchy toward a government of the people.” Great shifts in political philosophy can’t be accomplished convincingly in the denouement. (Or even in the epilogue.)

Readers in these politically energized times are less satisfied with stories where the world’s problems are solved by the Chosen One claiming the throne, or defeating the Dark Lord in single combat. Readers want stories that acknowledge the complexity of the world they contend with every day. Destroying Emperor Palpatine does nothing to address the authoritarian impulses that caused the Republic to fall, twice. Destroying Voldemort didn’t free the House Elves or end pureblood racism. If there must be a Chosen One, readers demand he do more than kill his opposite number. The Chosen One must leave an enduring legacy.

In The Wheel of Time, Rand al’Thor, the Dragon Reborn, makes a decent job of it when it comes to legacies. He could probably credit the lesson of two other “Chosen Ones” in history whose legacies were failures.

Lews Therin Telamon, Rand’s own prior incarnation, perpetrated the Wheel’s Original Sin of disunity by attacking the Dark One at Shayol Ghul without the support of the female Aes Sedai. The result was the male Aes Sedai going mad, Lew Therin earning the epithet “Kinslayer,” and the Breaking of the World.

The second failed Chosen One was Artur Paendrag Tanreall, the “Hawkwing.” During the High King’s lifetime, he succeeded in uniting the entire continent under his rule, which, for the common folk, was a peaceful and just rule. But after his death, his empire fell apart.

“Hawkwing died the very day the statue was finished, and his sons and the rest of his blood fought over who would sit on Hawkwing’s throne… The sons and the nephews and the cousins died, and the last of the Hawkwing’s blood vanished from the earth… There were those who would have erased even the memory of him, if they could. Books were burned just because they mentioned his name. In the end there was nothing left of him but the stories, and most of them wrong. That’s what his glory came to.”

The Eye of the World, “Eyes Without Pity”

I met a traveller from an antique land,

Who said—“Two vast and trunkless legs of stone

Half sunk a shattered visage lies, whose frown,

And wrinkled lip, and sneer of cold command,

Tell that its sculptor well those passions read

Which yet survive, stamped on these lifeless things,

The hand that mocked them, and the heart that fed;

And on the pedestal, these words appear:

My name is Ozymandias, King of Kings;

Look on my Works, ye Mighty, and despair!

Nothing beside remains. Round the decay

Of that colossal Wreck, boundless and bare

The lone and level sands stretch far away.”

The wisdom Rand al’Thor learns from his ta’veren predecessors (and through hard-learned lessons throughout the story) are that he cannot succeed on his own, and that facing his prophesied fate is not enough. He must lay the foundation for what will come after he is gone. This turning of the Wheel, he has to do better.

Let’s look at some of Rand’s biggest political contributions to the Fourth Age.

“They think they can always tear everything down. It’s always tearing down, never building up! I’m going to build something, leave something behind. Whatever happens, I will do that!”

Lord of Chaos, “A Woman’s Eyes”

The Black Tower was the first step along the road of righting Lews Therin’s Original Sin. Men like him, men who could channel, had no place in the world following the Time of Madness. Even as Rand amassed his Asha’man as a weapon to use in the Last Battle, he wanted the Black Tower to outlast him, to become every bit the institution as the White Tower. Whether it was by design or a result of being spread too thin, Rand took no part in the Black Tower’s fall into darkness under Mazrim Taim, and subsequent redemption under Logain. By the Asha’man authoring their own fate, they established an identity apart from Rand, and beyond their role in Tarmon Gai’don. Given Egwene’s prophetic vision of the fang and flame, at last unified in the ancient symbol of the Aes Sedai, it looks promising that the Black Tower will finally redeem Lews Therin’s sin.

“Rand had wanted to gather knowledge in one place. Time and again he had heard how much had been lost in the War of the Hundred Years and the Trolloc Wars. How much more must have vanished in the Breaking of the World? If he was going to Break the World again, he meant to create repositories where knowledge could be preserved. Another school had already started in Tear, though just barely, and he had begun seeking a place in Caemlyn.”

Lord of Chaos, “A Taste of Solitude”

Unlike the Black Tower, Rand’s schools were an effort of pure legacy. They would yield no advantage in the Last Battle; their fruits were for the Age after the Dark One was settled. Rand got to watch, in small but satisfying interstitial scenes, the inventors and scholars learning how to harness the power of steam and electricity. As readers, we know where this could lead, just as we know this is a thread that will go on to change the world beyond the Dragon Reborn’s story. The Fourth Age seems full of potential and possibility. Though Rand’s distance from the Black Tower could have been negligence (and bad delegation), Rand’s decision to play patron but not manager of the schools seem to come from a deliberate choice to let the experts do their work. Rand built not for his own glory, but for a better world after him.

“Yes, but there is the matter of the Bargain.” That word was plainly capitalized in Harine’s tone. “The Jendai Prophecy says you will bring us to glory, and all the seas of the world will be ours. As we give to you, you must give to us.”

A Crown of Swords, “Ta’veren”

The Wheel of Time is globalist in its ethos. Characters and nations discover strength in uniting disparate cultures and people. If the Dark One gains strength from chaos and entropy, the Light finds purchase in order and new, stronger ways of people coming together. The Sea Folk are but one of the isolationist cultures that Rand brings into the mainstream with the Bargain. It’s not an accident that, here too, Rand delegates negotiating the terms to the professionals, from the Gray Ajah Aes Sedai to skilled politicians like Queen Elayne Trakand. Rand is the catalyst for the world coming together, but he is intentionally not the glue that holds it together. All the participants are invested in working together.

“The last Age ended with a Breaking, and so the next one will begin with peace--even if it must be shoved down your throats like medicine given to a screaming babe.”

A Memory of Light, “A Knack”

Rand’s meeting with the leaders of the nations on the Field of Merrilor was, like the schools, an act of pure legacy. He could have simply met his fate at Shayol Ghul and let the survivors of Tarmon Gai’don do with the Fourth Age what they would. But Rand al’Thor took a page from Peter Parker’s book, and decided that his great power entailed great responsibility to the world that survived him. And he was not above extorting the nations for a hundred years of peace.

This was not a compact that could be sold by Tyrion Lannister delivering a stirring speech in the Dragonpit of King’s Landing, or even handed down, fully formed, by the Dragon Reborn. The rulers correctly pointed out that unless the Seanchan were brought into the accord, it was worthless. Aviendha demanded that the Aiel be included, having seen a bleak future if the Aiel had no defined place in the new world order. And Perrin, with his knowledge of tools and blacksmith puzzles, suggested that the Aiel be the enforcers of the Dragon’s Peace. Egwene resisted, and Moiraine mediated. Faile saw political maneuvering in how the parties reached their agreement, but it may be that Rand’s guileless insistence on a unity that would outlast him won the day on its own strength. With a touch of ta’veren, perhaps. As Herid Fel said, “Belief and order give strength.”

Compromise with the Seanchan

“Light be merciful, let it be done. I will carry this weight too. You may keep the damane you already have, but you shall not take any from among my allies while we fight the Last Battle. Taking any afterward who are not in your own land will be seen as breaking the treaty and attacking the other nations.”

Even the Chosen One must compromise, and bringing the Seanchan into the Dragon’s Peace proved to be the bitterest compromise of all. Within the lands they currently controlled, the Seanchan could continue their practice of enslaving women who channeled. Just as the Last Battle wouldn’t automatically rid the world of evils unconnected to the Dark One, cruelty, prejudice, and oppression were not banished from human hearts by the Dark One’s defeat. Chattel slavery was something the Fourth Age civilization would still have to wrestle.

Empress Fortuona herself, as a damane trainer, could be held by the a’dam. How would that truth weigh against centuries of Seanchan tradition, over time? Could Mat’s influence sway her heart? Will the Windfinders refuse to engage in commerce in Seanchan lands, putting economic pressure on the Empire? How would the united Black and White Towers deal with the Seanchan? The Wheel turns, and there are stories yet to be told, even if we’ll never read them. Rand al’Thor re-wove the universe to preserve human free will. With it comes the struggle to overcome the evil humanity has wrought, and to strive for new heights of nobility. Because that’s what free will means.