Rajiv's Threads In the Pattern: Prologues and Epilogues

The prologues and epilogues of our favorite epic fantasies let us linger at the edges of the story and beyond, making the world live and breathe beyond the bounds of plot. 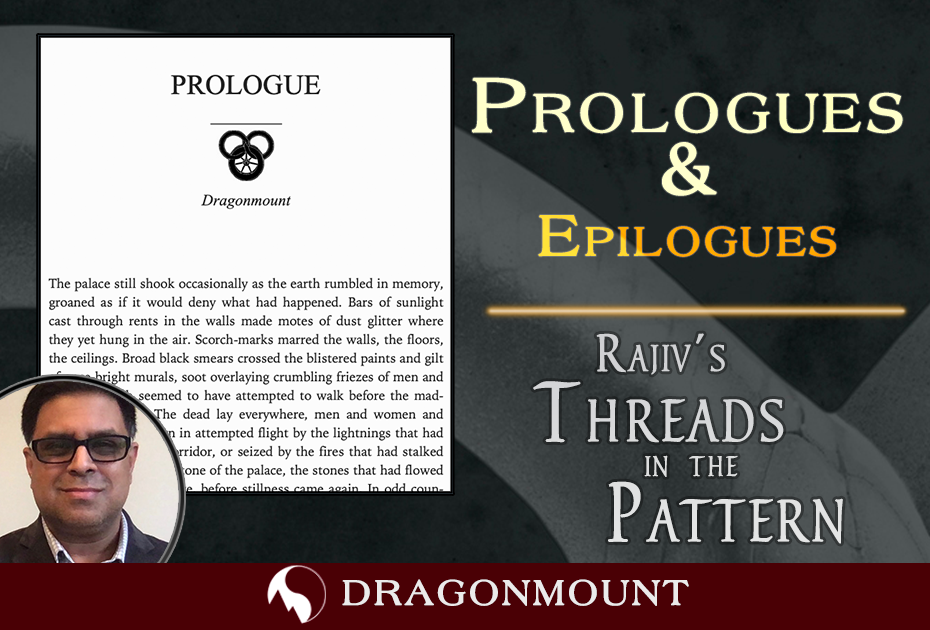 Spoilers below for The Wheel of Time books, and the prologues or epilogues of The Handmaid's Tale, A Game of Thrones, The Deathly Hallows, and The Return of the King.

The Eye of the World begins with one of the most memorable prologues in epic fantasy, a confrontation between a fallen hero-turned-madman and a villain who takes no joy in his apparent victory. It drops tantalizing hints of a world that is never fully explained, along with the idea that this battle has raged through an endless cycle of ages.


And in Chapter One, on an empty road, thousands of years later, the actual story begins.


I love prologues and epilogues. They let authors--and their readers--play at the edges of the story. They bridge the installments, expand the world, or just provide more emotional build-up and release. The early-release Wheel of Time prologues, beginning with “Snow” from Winter’s Heart, were like trailers for long-awaited movies. The epilogues of comic books--and the post-credits scenes of the movies they inspire--suggest possibilities sometimes more exciting than the stories themselves. “The Grey Havens” in The Lord of the Rings taught grade-school-age me the notion of beautiful melancholy.


In The Wheel of Time, the only books without a prologue are New Spring and The Shadow Rising. In the former’s first chapter, “The Hook,” Lan witnessing the end of the Aiel War feels isolated enough from the main story to feel like a prologue. In the latter book, parts of the first chapter were, in fact, a prologue in the advanced reading copy before being integrated. The Shadow Rising’s first chapter surveys a number of points-of-view, a technique both Robert Jordan and Brandon Sanderson used in subsequent prologues. “Snow” and the prologues that followed, seemed to be written specifically for advance release, checking in on several characters--major and minor--to tease the upcoming book.


By contrast, Lord of Chaos is the first book where Robert Jordan used an epilogue, a practice he did not pick up again until 2003-2004, with Crossroads of Twilight and New Spring. But even as early as The Eye of the World, when Moiraine told Lord Agelmar what must be done with the Horn of Valere, and spied on Rand while declaring “the Dragon is Reborn,” Jordan used the final scenes less to conclude the arc of the current novel than to set up the next one. The final chapter, “After,” of The Great Hunt, was even more explicitly an epilogue, switching to an omniscient point-of-view to describe how the ending of the Hunt reverberated across the continent. Prologues and epilogues, whether labeled so or not, are consistent features of The Wheel of Time. They give readers a look at the story’s place in the larger world, either through new point-of-view characters (in a story with dozens already), or sweeping narration across ages and geography.


Most Western notions of story demand that a story begins when the protagonists face a threat to their status quo, and ends with a new status quo. In big, secondary world stories, prologues and epilogues allow readers to break outside the structure of Aristotle's unities (action, place, time) and Gustav Freytag’s dramatic acts (exposition, rising action, climax, falling action, denouement). We glimpse people and events that inform--but are not part of--the story to come, or linger in the denouement, seeing how the story ripples beyond its bounds. For a bit longer, readers get to enjoy the world in which they are investing hours of imaginative immersion.


The Eye of the World’s prologue puts Rand al’Thor’s story into the vaster context of an eternal battle between the Dragon and the Dark One, where Rand’s struggle becomes Lews Therin’s second chance. This widening scope shares similarities with the epilogue of Margaret Atwood’s The Handmaid’s Tale. It occurs hundreds of years after the events of Offred’s story. An academic puts Offred’s harrowing and uncertain fate into the context of the rise and fall of the oppressive regime of Gilead. In both novels, these story fragments, separated in time, reframe the main tale. Both offer hope in the long arc of history. They imply other stories.


The “Dragonmount” prologue introduces readers to the saga’s real stakes. On the way to Tarmon Gaidon, though, there are hundreds of pages focused on the Aiel, the return of Hawkwing’s armies, the Shaido, the Bowl of Winds, Andor’s royal succession, and the schism and healing of the White Tower. The prologue keeps readers’ eyes on the prize. The prologue in George R. R. Martin’s A Game of Thrones does the same, letting the readers know that the Iron Throne is a distraction from the real threat: the Others are coming (someday?) with The Winds of Winter.


The scope of epics means not every plot thread gets wrapped up when the core story ends. Falling action and denouement can be a narrow frame for the catharsis readers want. In “To See the Answer,” the epilogue to A Memory of Light, we know that the Light triumphed in Tarmon Gaidon, but we still want hints of what the future holds for our surviving heroes in the Fourth Age. The answers give us just enough to imagine the future. And like Sister Night stepping out onto a swimming pool at the end of HBO’s Watchmen, a mysteriously lit pipe suggests an entirely new set of possibilities that will only live in our imaginations. The Wheel turns.


Sometimes we want more than just assurances that the story goes on. It’s not essential to know that, at the end of The Lord of the Rings, the mallorn tree that Samwise Gamgee planted became famous, and the beer of 1420 was remembered for generations. But it feels good. And fans young and old were glad to know that after Voldemort’s destruction, Harry married Ginny, Hermione married Ron, they all remained friends, and their children attended Hogwarts School of Witchcraft and Wizardry, surely to have adventures of their own. After spending years invested in a story world, readers take comfort not only that the world continues, but that it’s a better place for the struggles of its heroes.


Readers need structure to navigate a sprawling epic. But they want emotional payoffs too, and everyone has a secondary plot line, character, or detail they hold especially dear. Prologues and epilogues, the stories around the stories, give the reader this richer satisfaction. When I return to these worlds, they’re the first parts I revisit.


What’s your favorite prologue or epilogue?