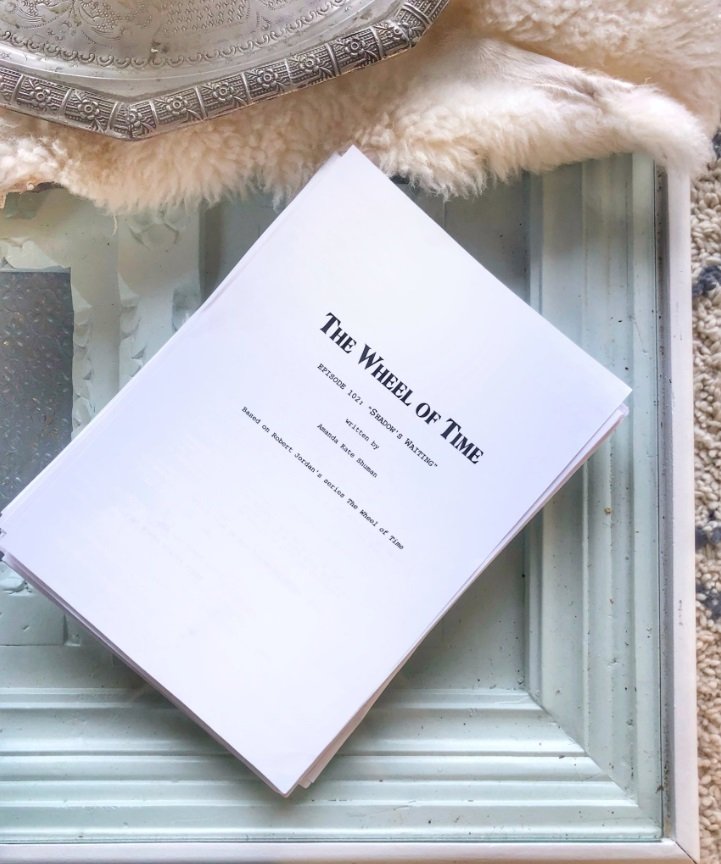 At the beginning of the month, Rafe Judkins—showrunner for The Wheel of Time television series—began to give us hints on Twitter about his involvement and progress with script writing and other behind-the-scenes details.  This quickly morphed into #WoTWednesday (it had started out in July as #WoTMonday).

Each Wednesday, Judkins has been posting small snippets for us to drool over.  Here’s a quick recap of August’s posts: 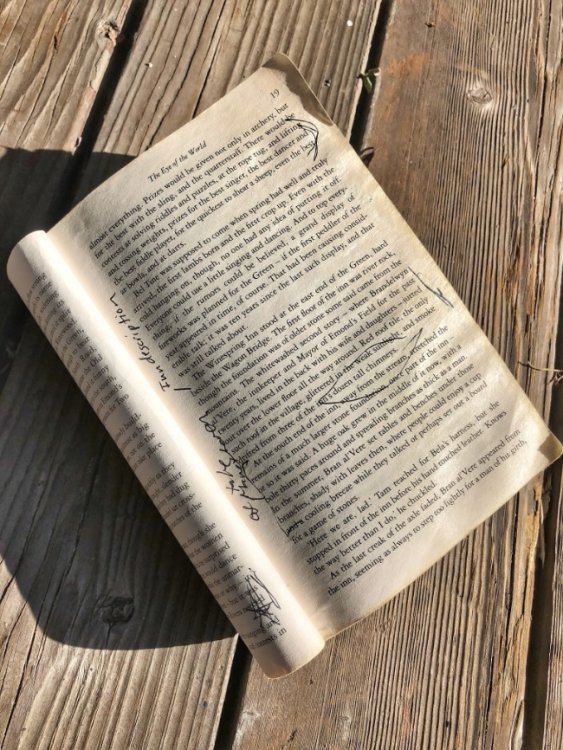 “So I thought for #WoTWednesday this week I’d post something that gives you a little insight into how I broke down the books (without giving away too much), so I decided to open to a random page in the EoTW (Brit edition!  My original was too beat up) and take a picture.”

The page opened to was 19 (of the British, Orbit edition) where Rand and Tam arrive in Emond’s Field and Rand dwells on the meaning of Bel Tine and the coming of spring.  Judkin’s inscriptions—as far as I can tell—read “Fun description” when Rand talks about the first lambs of spring, the festivities that will be held, the arrival of the first peddlers, and the possibility of fireworks.  Also, Judkins scrawled the words “Tale of Manetheran” when Rand details the history of Bran al’Vere’s inn—and the fact some of the walls are older than the whole village.

For this post, Judkins switched to Instagram since he shared a more personal (and longer than Twitter allows) story about his connection to Wheel of Time and being exposed to other cultures.

“For #WoTWednesday this week, since I’m in Fiji where 30% of the population is Hindu (and the 10 dollar coin is actually a mandala of the Kalachakra or “Wheel of Time”) I thought I’d talk a little about the philosophy of the books and what I want to bring out in the series. One of my favorite things about the books is how they embrace eastern religions and philosophies and put them into an epic fantasy context in a way we haven’t yet seen in tv or film. I plan to lean heavily into the concept of reincarnation in the books and have spent a lot of time talking to people who believe in reincarnation to get a feel for how that affects not only your philosophy of the world, but also the every day way you live your life. I’d love to hear, too, about some of your favorite moments from the books that deal with reincarnation or being spun out again by the wheel of time (mine is Birgitte Silverbow’s return?). Obviously, yin and yang and balance and duality are important eastern philosophical concepts from the books that I want to bring out in series, but we will save discussions on that for a future trip to China ;)”

“For #wotwednesday this week, I’ll do something scandalous and give you an actual snippet from the first script of one of those iconic scenes that simply must exist.  Introducing THREE key characters ;)”

Judkins then attached an image of the script with some details before the character’s dialogue.

We’re higher in the mountains, spring’s touch hasn’t reached here yet.  Trees are bare, patches of snow dot the ground.

An OLD CART filled with SMALL WOOD BARRELS and BALES OF WOOL makes its way through the wood, pulled by a shaggy BROWN MARE. TWO MEN walk on either side of her, father and son.

This is TAM AL’THOR, 50’s, an aging shepherd with the watchful eye of a warrior. Thick chest and broad face, there’s a masculine solidness to him, as though a flood could wash around him without uprooting his feet.”

And finally, from today, August 29th:

“Hey!  Sorry (especially to non-US folks) for the lateness on this.   But this #WoTWednesday I thought I’d give another script grab — this time about casting.  Actual casting is a long way off, but this at least gives you an idea of how we are thinking about it in a general sense.”

Along with this text, Judkins attached a part of the script detailing the direction of some characteristics of the Randland residents, stating:

“[A QUICK NOTE: race in the world of Wheel of Time is much less defined than in our world.

As much as possible, our cast should look like America will in a few hundred years – a beautiful mix of white, brown, black and everything in between]”

There’s little we can glean off of these, other than a steadfast knowledge that our beloved series is in good hands.  To have a fan at the reigns relieves many of my anxieties about an on-screen adaptation.  And even though these are small morsels, it’s consistent and done so lovingly, that it rids me of all the other anxieties.  Yes, it will be a while before we have a tangible product.  But we know it’s in the works, and it’s getting there.  As Lao Tzu said, “A journey of a thousand miles must begin with a single step.”  Judkins is taking those first few steps and we will arrive home eventually.