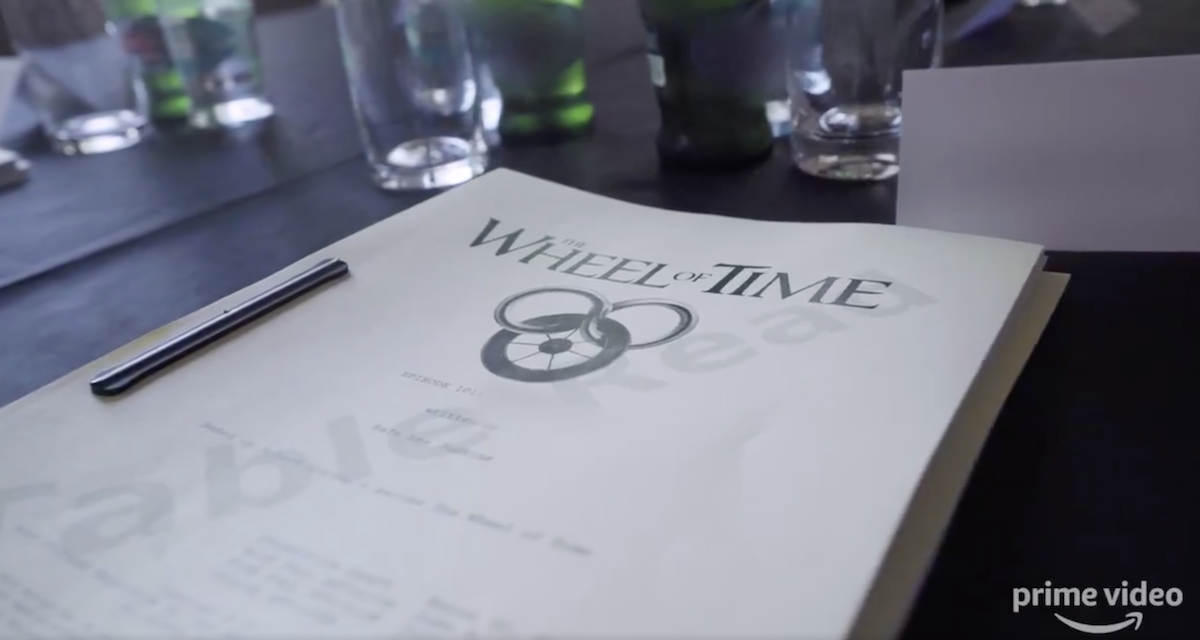 Filming is now well underway on Amazon’s Wheel of Time TV series and for this month’s “WoT Wednesday,” Amazon gave us a special surprise: a clip of the table read for the first two episodes.

For those who are unfamiliar with the process of making television, a table read is held for each episode or, if the season is short enough, the entire season, with all of the actors present. The table-read helps actors learn each other’s voices, get into character and feel comfortable with the dialogue, and also helps the producers make sure they’ve got the timing correct for each episode. This is less crucial for a streaming service than it is for a network show selling adverts, which has to be 44 minutes on the dot, but Amazon still seems to keep things more strictly within a time limit than, say, Netflix or HBO. The table read is also often the first time the actors have read the script, rather memorably in Kit Harington’s case for the final season of Game of Thrones.

The clip is the first time that we get to hear the actors embodying the characters they’ll be playing on the show, confirming that they’re going with a fairly ordinary English accent as the default accent for the Two Rivers, and perhaps all of Andor (as Robert Jordan indicated many years ago). Moiraine also has a somewhat “posh” accent, as you’d expect from a noblewoman and Aes Sedai. Barney Harris gets the biggest laugh as Mat Cauthon, cautioning his friends to be wary of Moiraine as she can “shoot fireballs,” so they should heed her advice. Combined with a line about crossing the river, this seems to confirm that the first two episodes will, between them, cover at least all of the events of Winternight, the battle at Emond’s Field and our main characters’ flight from the Two Rivers by cover of night.

Exactly how much of the book the first episode – which we known has the working title Leavetakings – covers has been fiercely debated, especially as the second episode is called Shadow’s Waiting, suggesting it focuses on events in Shadar Logoth, although some have suggested that Episode 2 ends with the characters reaching the cursed city. Episode 3 is called A Place of Safety, which could be an ironic alternate title for Shadar Logoth itself. Of course, such speculation is not helped by the fact that, as of yet, we don’t know how many episodes there will be in the first season either. We do know there will be at least six, but not how many more than that. A nine-month shoot is more suggestive of ten to twelve episodes, but that remains to be confirmed.

The clip is also interesting in that it gives us a look at some actors who have not been officially announced yet. Immediately recognisable is Irish actor Michael McElhatton, best-known for playing the villainous role of Roose Bolton in Seasons 2-6 of HBO’s Game of Thrones before recently appearing as a Soviet general on Chernobyl. McElhatton is infamous for his menacing stare and voice so could be playing a villainous role, but has also appeared in far more lighthearted and comedic roles. Bearing in mind that the table read is for the first two episodes, the most immediately appropriate casting would be for the role of Padan Fain, the friendly peddler whom, it turns out, is not quite as friendly as first appears. Other likely possibilities would be Tam al’Thor or Thom Merrilin. Less-likely but also possible would be Geofram Bornhald, especially if they introduce him in Baerlon rather than later on, or Ishamael/Ba’alzamon if they get as far as the boys’ first shared nightmare.

Another possibility, that McElhatton might be playing Ishamael in the prologue, is discounted by Rafe Judkins’ Q&A of a year ago where he seemed to be suggesting that the prologue would not appear until later in the series (along with the events of New Spring), and an earlier statement that the first episode opens with Tam and Rand on the road to Emond's Field. The prologue is iconic and not using it to start the show might be considered sacrilegious, but there are at least two good reasons for not doing so. The first is that casting an actor as Lews Therin, using them briefly for one season, and then potentially not using them again for another two or three seasons is bad business practice, since it’s possible the actor will move onto other projects in the meantime and it’s expensive to put an actor under contract to not accept other work. Game of Thrones suffered from this problem, casting Ser Gregor in the first season and then having to use (two!) different actors later on because the original actor had been cast in Peter Jackson’s Hobbit trilogy in the meantime.

More likely, given the show’s determination to make the identity of the Dragon Reborn more of a genuine mystery to TV watchers, is that the segue from Lews Therin to Rand is a bit on the nose and they want to keep things vaguer.

One other actor who has been likely confirmed for the production is British actress Naana Agyei Ampadu, who recently appeared in a recurring role on British sitcom GameFace and in a minor role on the Steven Spielberg movie Ready Player One. Ampadu's casting was announced by her own casting agency on Twitter, who then quickly deleted the tweet, presumably because the release had not been okayed by Amazon.

Dragonmount has asked Amazon if they could confirm McElhatton's and Ampadu's casting in the show, but they declined to comment at this stage.

Tracking down other actors involved in the production is more difficult than you’d think, as several productions are currently shooting in and around Prague. Fear the Walking Dead actor Fernando Rojasbarr seemed a likely candidate, for example, until he revealed on his Instagram that he’s actually shooting a film called Zátopek. The movie Ophelia also wrapped shooting a couple of months ago, with some actors delaying posting any information to social media until recently, which briefly led to speculation that Tom Felton (Harry Potter’s Draco Malfoy) might be in Wheel of Time until the misconception was cleared up (he's not).

That said, northern Irish actor Stuart Graham (Michael Collins, Tinker Tailor Soldier Spy) is in Prague at the moment and may be the grey-hair guy briefly glimpsed at the read. A similar age to McElhatton, he could also be a good guess for Thom Merrilin, Tam al’Thor or Padan Fain. Or he might be in town for one of the other projects mentioned above. We'll see if we can get his casting confirmed as well.

As for the shoot itself, which is now about to start it's fourth week (of around 34-37 weeks, with shooting due to conclude in May), production has moved to western Slovenia where the Great Soča Gorge, near the Italian border, is being used to stand in for part of the Two Rivers. The spectacular scenery, with the  eastern Alps as the backdrop, certainly seems to fit the book descriptions. Actors Daniel Henney (Lan) and Josha Stradowski (Rand) shared some pics they'd taken from the shoot via Instagram.Eagle-eyed Wheel of Time fans are now scouring the video for more clues to the identity of the other actors, and we’ll bring you their findings as soon as we can.