The Wheel of Time has wrapped production on its sophomore season. Let's look at the wrap news and also the challenges faced by any show heading into its second season. 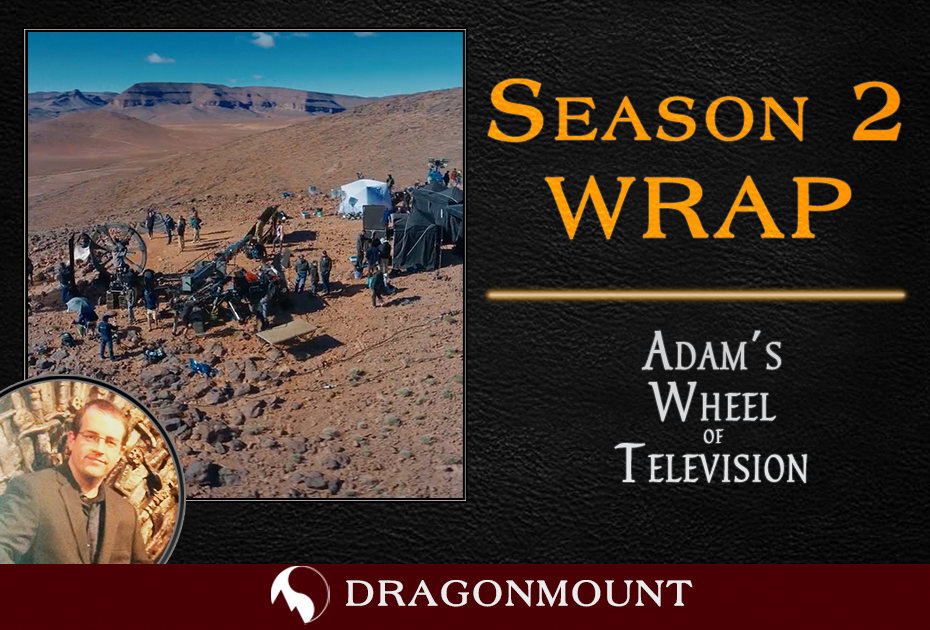 The Wheel of Time has wrapped production on its sophomore season on Amazon Prime. Amazon made the formal announcement today.

That’s a huge improvement on Season 1, which shot for twenty months from 16 September 2019 to 14 May 2021. The immense shoot was, of course, delayed by the COVID19 pandemic, which resulted in two breaks in production for lockdowns and filming suspensions.

Despite rumours circulating, Amazon has not so far formally greenlit a third season. They have also not confirmed yet when Season 2 will air.

The second season is always an interesting time for a TV show, either allowing it to build on the successes of the first season and become even bigger or failing to maintain the audience and excitement from the debut season, which can put it on the path to cancellation.

Second seasons can be rough. Producers and writers might have several years to write the first season (or the pilot) and just months or even weeks to write the second season. Sometimes writers just want to repeat themselves from Season 1, leading to accusations of resting on their laurels (the fate of many a Star Trek sophomore season). Sometimes writers decide to throw in a whole ton of new characters, sometimes at the expense of the original cast, leading to criticism (arguably the fate of Lost and Heroes). Sometimes the writer will go really left-field and set the second season in a different location to the first, following different storylines and leaving behind characters and stories from the debut. David Simon pursued this course with The Wire, to the annoyance of not just fans and critics, but also some of his best actors who found themselves with a lot less to do. Of course, in the long run the move was vindicated. For True Detective, which changed absolutely everything including the entire cast, it was not.

Other shows thrive in their second season. They take on board the lessons learned from the first, tighten up the storytelling, maybe lose the stand-alone scene and character-setting episodes from the debut year and move forward with greater verve and confidence. Shows like Babylon 5 and Buffy the Vampire Slayer made absolutely massive strides from their first to second year, upping the quality of writing and storytelling in a huge way and sometimes delivering a season that would go on to be regarded as the best of the whole show. Agents of SHIELD – on which a certain R. Judkins worked as producer and writer – famously had a divisive first season followed by a blistering second season which threw together a whole bunch of great concepts (Hydra, Inhumans and two factions of SHIELD) and moved with tremendous pace and skill, and was credited with saving the show and ensuring it went on for a full seven-year run.

For The Wheel of Time, it’ll be interesting to see how the scales fall. And, of course, as an adaptation of a book series, it has its own unique challenges to handle.

The first challenge will be integrating the new cast of characters with the cast from the first season. To some extent this problem has been reduced because many characters who debuted in the second novel have already shown up in Season 1: Siuan Sanche, Liandrin and Alanna Mosvani are good examples of that. This means that Season 2 can focus on introducing a smaller cast of new characters, since some of the heavy lifting has been done for them. There are a few counter-examples though, of Book 1 characters who have been delayed to Season 2 (like Elyas Machera and Elayne Trakand), and even Book 3 characters who are being introduced this season (most notably Aviendha). With only eight episodes to work with, the show has to be careful on how it divides its attention between its existing cast and the newcomers. Part of this will also be integrating Dónal Finn as the new actor playing Mat Cauthon (after Barney Harris’s departure during the filming of Season 1), giving him time to settle into the role.

To this end, Wheel of Time can take some tips from the second season of Game of Thrones, which also brought in a substantial number of new characters (Stannis, Melisandre, Roose Bolton, Davos, Margaery Tyrell, Brienne) and was able to make them as popular and enjoyable to watch as the (quite large) existing Season 1 cast.

However, Wheel of Time has a bigger challenge as well. With the show likely to only last seven to eight seasons of eight episodes apiece, the show has more than twice as much book material as Game of Thrones to cover in fewer episodes. With Season 1 almost wholly restricting itself to material from The Eye of the World, Season 2 will probably cast its net further afield and adapt elements from not just The Great Hunt but also The Dragon Reborn, and maybe even other books in the series. Doing so in a coherent manner will be challenging to the writers.

It will also be a challenge to some of the fans. The first season of The Wheel of Time attracted reasonable critical reviews and a strong audience for Amazon, but some devoted fans of the books struggled with the deviations from the text, in characterisation, the changing of plot points or worldbuilding details. Season 2 will probably have no choice but to take the TV series even further away from the books in terms of fidelity to the source material, as it has to adapt a broader range of material from more books. Inevitably, fan-favourite characters and storylines will not make the cut.

Season 2 should benefit in one area: how it handles production during a pandemic. Season 1 was three-quarters shot when the COVID19 pandemic shut down production for several months, before shooting on Season 1 could wrap under heavy quarantine restrictions. It’s clear that the crew were scrambling to implement restrictions and make them work whilst also maintaining a crisp and efficient filming schedule. For Season 2 they were much more prepared for this kind of filming, which hopefully should have helped make things go more smoothly.

The second season of The Wheel of Time does not have a release date yet. As usual, we will keep you informed of all the relevant details. For more information, visit our TV show section of the website.