Looking at the WoT production timeline so far, when are we likely to see Season 2, and what factors are impacting that decision? 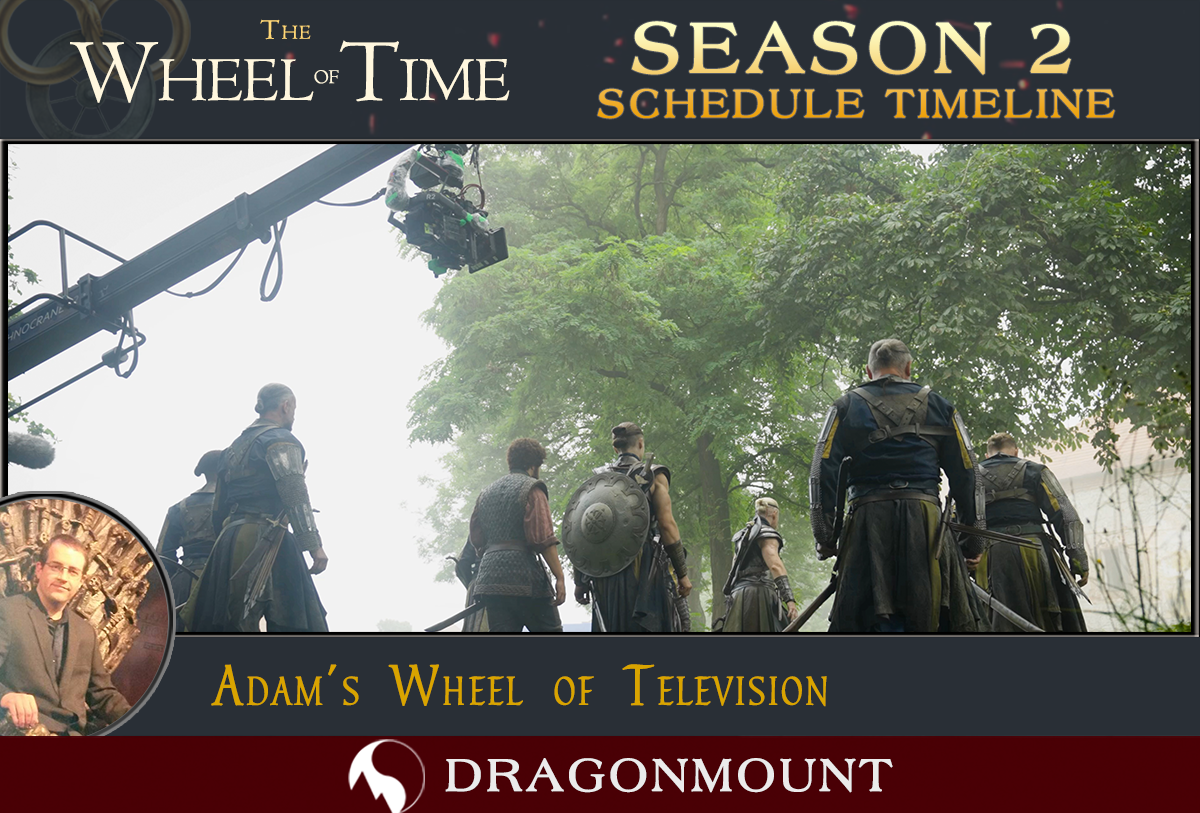 At the moment there’s a huge amount of hype swirling for the imminent launch of two fantasy shows based on literary properties: House of the Dragon, a forerunner to Game of Thrones, hits HBO on August 21st. Lord of the Rings prequel The Rings of Power follows that up on Amazon on 2 September. Both shows have recently dropped new trailers and started the marketing process.

With those two behemoths facing off, it’s understandable that Amazon is holding fire on the marketing for Season 2 of The Wheel of Time. Season 2 of the series wrapped back in May but so far we haven’t had much news about the launch date for the show (although we now have a Season 3 renewal confirmation!). Given that Season 1 wrapped in May 2021 and the show launched in November 2021, it might be logical to assume that Season 2 will likewise appear on Amazon before the end of the year. Indeed, fans and content creators have been debating this point for a while.

Looking at the timeline of how Amazon shot and then marketed Season 1 might be interesting:

Based on the precedent from Season 1, we might be expecting publicity images and maybe a poster to emerge in the next month or so, followed by a trailer in September and Season 2 to premiere in November. No problem, right?

There are, however, two major differences compared to the launch of Season 1.

The first is the impact of COVID. Season 1 filmed over twenty months with two shutdowns of production caused by filming restrictions. The longest gap fell between the completion of shooting on Episodes 1-6 and the start of shooting Episodes 7-8 (it was during this gap that Barney Harris left for reasons that remain undisclosed). During these gaps in filming, post-production was able to proceed at a solid clip. CGI, editing, composing, etc all took place whilst the show was on hiatus and is believed to have been partially or mostly completed for the first six episodes by the time the show wrapped in May 2021. Thus, post-production was really only required for the last two episodes once shooting ended in May 2021.

Whilst I have no doubt that some editing, vfx work etc started for Season 2 before it wrapped, it does appear that post-production was in a less advanced state then it was when Season 1 wrapped. So, more work and presumably more time is required for Season 2’s post-production requirements.

The second issue is more obvious: Amazon are launching The Rings of Power with a double-episode bonanza on 2 September. The remainder of the eight-episode first season will be released once a week, taking them through 14 October (this may be less relevant, but House of the Dragon will release episodes from 21 August through 23 October). Amazon may feel leery about immediately following up The Rings of Power with another epic fantasy show straight away, or even a month later. They also have an additional scheduling problem in that the second season of Carnival Row has been sitting on the shelf for a lot longer than Season 2 of The Wheel of Time (Season 2 of that show wrapped in August 2021). According to Deadline, Amazon has internally committed to releasing Carnival Row in 2022, which would require them to either double-up on original show releases (which Amazon traditionally doesn’t do, at least not in the same genre) or push Wheel of Time to 2023.

Although Carnival Row is also fantasy, it’s more of a steampunk fantasy with a 19th Century Victoriana vibe, which would set it apart from the medieval-ish fantasy of both The Rings of Power and The Wheel of Time.

For these reasons, I would guess that The Wheel of Time will not debut in 2022 but instead will launch in the first few months of 2023.

On the subject of the renewal, there’d been some ideas floating around from fans a few months ago that Seasons 3 and 4 would be renewed at once. We have seen more and more shows doing multi-season renewals – Netflix’s The Dragon Prince even got a four-season renewal a few years ago – and they’re being seen as a good way of spreading costs around, since shows can now go straight from producing one season into working on the next without an awkward pause (potentially lasting months) whilst the suits crunch numbers behind the scenes. This is both good – you know you’ve got gainful employment for the next two years rather than the next few months – but it can also be limited. When a streamer or network renews a show, they often also assign the budget, and when they renew for two seasons, they sometimes assign the budget for both seasons ahead of time. This is great if you know you’re not going to be ramping up the scale and scope of the project between seasons. If you are, it can be better to be more flexible and go on a year-by-year basis, even if that means a toe-curling wait every summer. Having two seasons renewed can also complicate things if one season goes over-budget: The Wire had its final two seasons approved by HBO in one go, but when Season 4 went seriously over-budget they were not given any more money, but had to “raid” Season 5’s resources to make up the shortfall, explaining why Season 5 was both shorter and had fewer locations.

It’ll be interesting to see if Amazon start any marketing moves towards launching Season 2 of The Wheel of Time in the next few weeks, beyond the Season 3 renewal and “sizzle reel” for Season 2. If we get into September and October without any trailer or marketing information, a 2022 launch I think could then be ruled out.

The second season of The Wheel of Time does not have a release date yet. As usual, we will keep you informed of all the relevant details. For more information, visit our TV show section of the website.