Prime Video revealed footage as part of a sneak peek for the second season of The Wheel of Time. We still don’t have a release date, but we now have a bit more of a clue as to what stories we’ll be seeing in the sophomore season 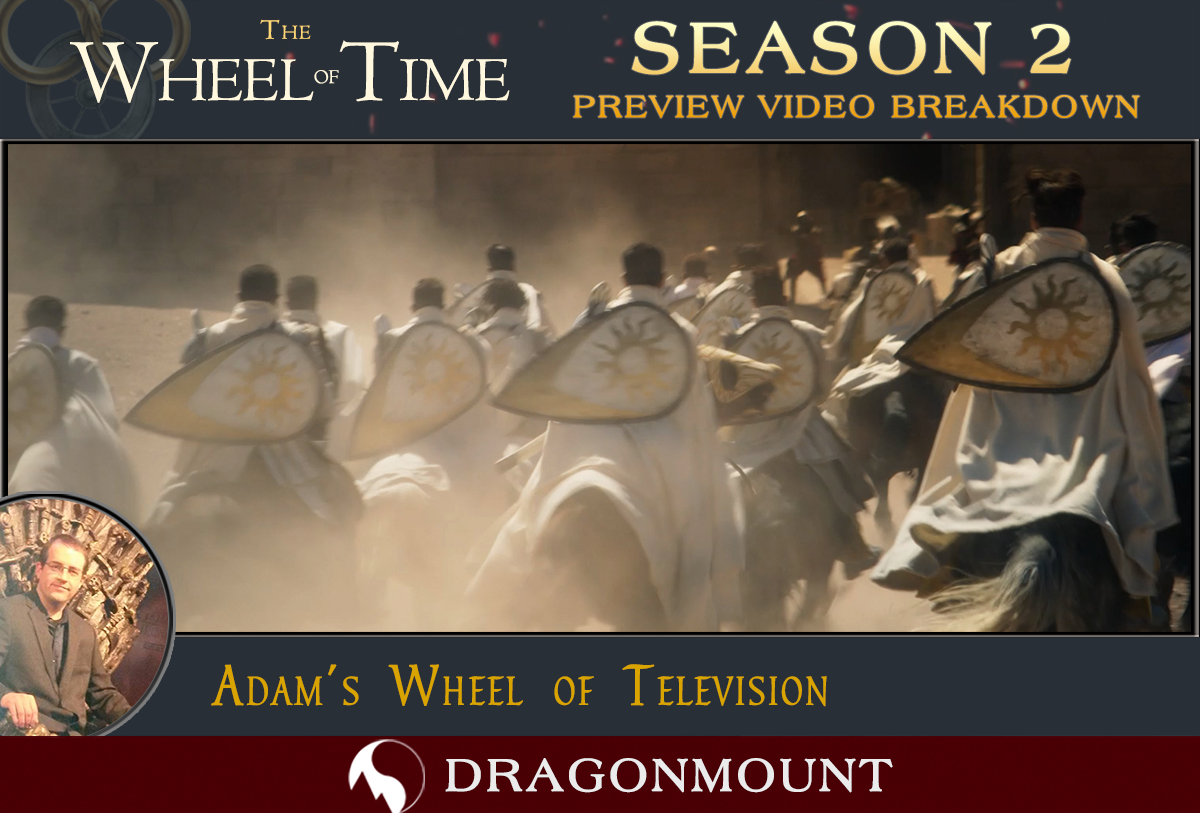 Prime Video revealed footage as part of a sneak peek for the second season of The Wheel of Time. We still don’t have a release date, but we now have a bit more of a clue as to what stories we’ll be seeing in the sophomore season.

According to showrunner Rafe Judkins, the second season will draw heavily on The Great Hunt and The Dragon Reborn, the second and third books in the series. His plan is to arrange things so that the already-greenlit Season 3 can focus on more closely adapting the fourth book in the series, The Shadow Rising, the favourite book of many readers.

The video opens in a somewhat desolate landscape with eleven riders heading down a road. It’s probable that this is Perrin and Loial travelling with Lord Ingtar’s party in search of the stolen Horn of Valere, since the terrain is very similar to what we saw for Fal Dara in Season 1.

We then see Rand (Josha Stradowski) staring out of a window whilst we hear Moiraine (Rosamund Pike) saying that they did not defeat the Dark One, but released his strongest lieutenant (Fares Fares, presumably playing Ishamael). That lieutenant is now awakening the Forsaken, the Dark One’s most powerful servants. 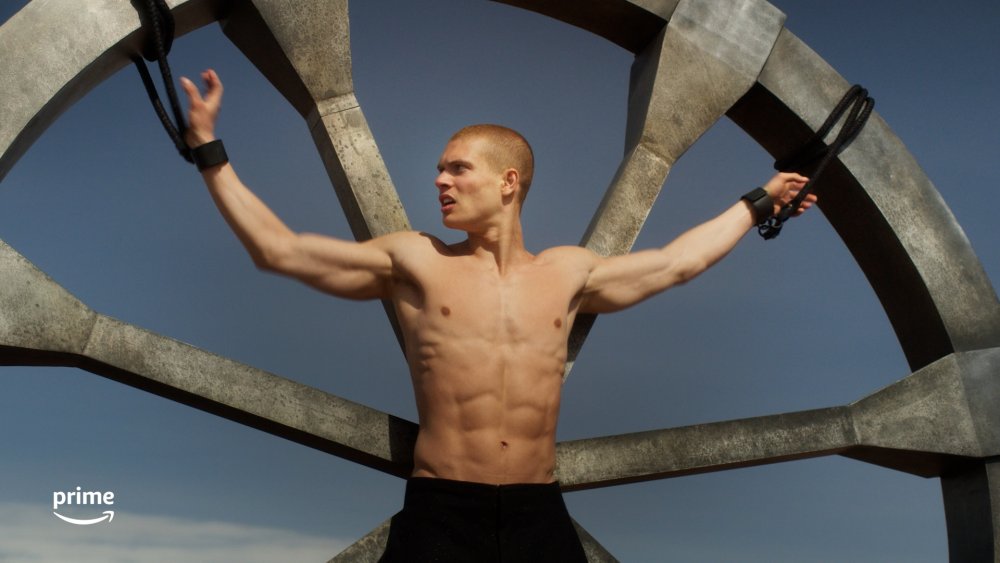 We see a figure with long hair hands covered in blood being awoken before cutting to a table with twelve figures sitting around it, with their faces hidden apart from Ishamael. Based on the dialogue you might be expecting this to be a council of the Forsaken. However, there are twelve rather than thirteen figures and the figures have somewhat distinctive clothing, including the white gloves and sleeves of a possible Child of the Light, and one Aes Sedai ring. This may then be the “Darkfriend social,” a fan-favourite event in the second book when a group of high-ranking Darkfriends from across the land gather to hear of the Dark One’s plans.

We then cut to the arrival of a detachment of what appears to be Seanchan troops in a village. They have imprisoned Uno (Guy Roberts), one of Ingtar’s men. He is forced to kneel before several damane whilst Perrin (Marcus Rutherford) and Loial (Hammed Animashaun) watch on.

We then cut to Mat Cauthon, now played by newcomer Dónal Finn, before seeing a member of the Seanchan nobility, the Blood, complete with an ornate face mask hiding her features and long, lacquered fingernails (based on the books, this is possibly the High Lady Suroth). Moiraine then warns Lan (Daniel Henney) that he has “no conception” of the power “they” wield, as we see Seanchan soldiers assemble. Moiraine may be talking about the Seanchan or, maybe more likely, the Forsaken. 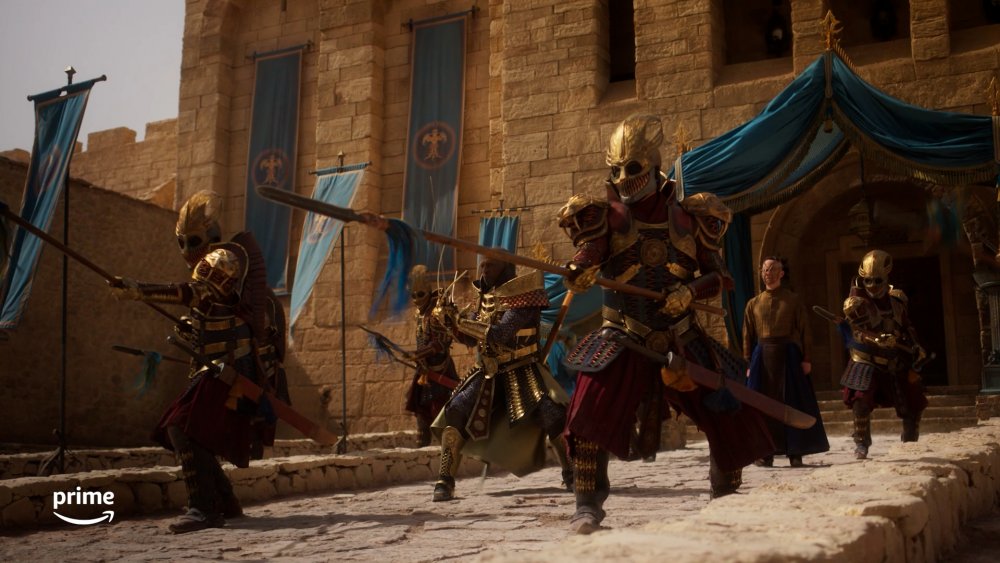 The Seanchan are a strong focus of the preview.

The camera cuts to Nynaeve (Zoë Robins) standing in a field, Lan practicing his sword forms, Nynaeve practising sword combat with Alanna’s Warders, Moiraine hiding with a drawn dagger, and several Seanchan soldiers lowering their spears alongside what might be a Seanchan nobleman. We see Egwene (Madeleine Madden) a stone room, Mat looking at a flame, Loial restrained by ropes, Moiraine in a bath, Rand tied to a wheel (maybe a dream sequence?), Perrin looking scared, Uno defeating a Seanchan in combat, and the Amyrlin Seat Siuan Sanche (Sophie Okonedo) descending from a carriage. Over this, Ishamael intones that “the only way to stop all this suffering is to stop the Wheel itself.”

We then see more scenes of combat; Egwene screaming with a metal collar around her neck; the Children of the Light assault the Seanchan stronghold; a cloaked figure with a long, serrated blade; a group of soldiers charging into battle; and a man being engulfed in flames. 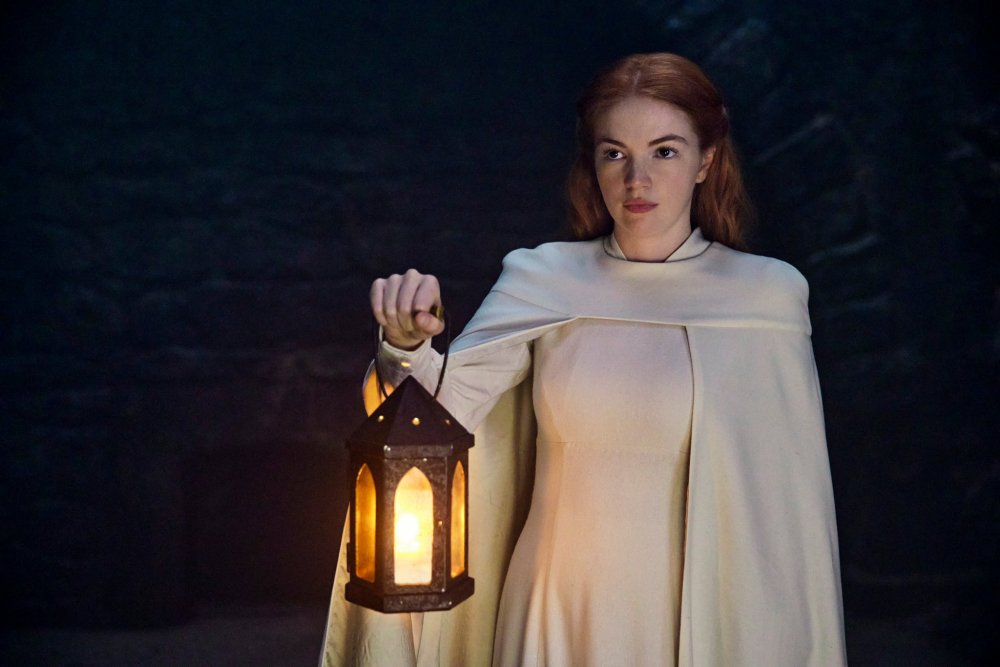 Putting these pieces together, it looks like mostly material from The Great Hunt. The Seanchan conquering the town of Falme, consolidating their control, and then being attacked first by Ingtar’s Shienaran soldiers and then the Children of the Light, with Egwene’s captivity hinted at. Notably missing from the preview video is any sign of Elyas (Gary Beadle), Elayne (Ceara Coveney) or Aviendha (Ayoola Smart) or the Aiel in general, or other storylines linked to The Dragon Reborn (apart from Rand’s solo adventure), so there’s obviously huge amounts of material from the season missing from this brief teaser.

New material is hinted at, such as Nynaeve learning to fight physically, possibly a result of her learning more about her wilder’s block and needing another way of protecting herself. We also know that the pursuit of the Horn is going to be somewhat different, with neither Mat nor Rand taking part, but what exactly they’ll be getting up to in the meantime is unclear. I suspect we’ll be getting some of Mat’s adventures in Tar Valon from The Dragon Reborn and some of the material from Rand’s solo adventure from the same book.